Actually nobody yet really knows what exactly to expect from the worlds newest entry in the field of unlimited hydro racing. But it is expected by many, this writer included, that the U-95 will perform some amazing feats, possibly as soon as the Seafair races.

The U-95 is the first turbine-powered unlimited in the world. Should it prove as successful as expected, it certainly won’t be the last.

The U-95 is in reality an intermix of aerospace technology, hydrodynamics and aerodynamics never before used in any form of boat racing. 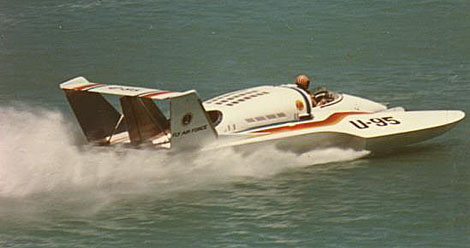 The hull was designed by Ron Jones, whose last effort was the Pride of Pay n Pak, the heartbreak kid of this year’s Gold Cup. At first glance the U-95 may look like other “pickle-fork” designs. Look again. U-95’s placement of the midships cockpit is different, as is the engine-well size and placement. Jones says it’s his first truly rear-engined unlimited. In addition, the controllable rudder and horizontal stabilizer in the tail section depart from conventional designs. The afterplane is a lot longer and the sponsons are shorter. The leading edge of the boat in the pickle-fork area is much farther toward the rear than in any other picklefork designs. Even the term pickle-fork is not accurate for U-95. Instead the crew has dubbed it “The Flying Wing.” Further, U-95 has provisions for the spoilers, meaning a capability similar to but not the same as air brakes or flaps. This, too, is a first for the Thunderboats.

To most fans, however, the hull and other innovations of U-95 are purely of secondary interest compared to its powerplant. U-95 marks the entry of turbine power in unlimited racing. U-95 is powered by two Lycoming T-53 engines. They weight 500 pounds each and each generates 1,700 horsepower, burning kerosene.

Why turbines? According to Jim Clapp, owner of the U-95, “The turbine engine is the engine of the future. It is almost trouble free has far fewer moving parts than piston engines, will operate in any position and under any atmospheric conditions, uses cheap, plentiful fuel and is virtually pollution-free. Carl Kiekaefer of Mercury Outboard Motor fame, proved his turbine engine in ocean racing so well he was ruled out of using them in that sport. Any Granatelli proved his turbine engine at Indianapolis and so frightened lesser men that he, too, was ruled out of using them another turbine in his cars. The unlimiteds are thrilling to watch, but their technical aspects and use of World War II engines never turned me on. Hull designs have changed little in 23 years. They are committed to engines which were new 28 years ago! That’s more than a generation! They are locked into re-building not only these old engines, but the same mechanical supportive systems that keep them running!”

James J. (Jim) Clapp, 42, owner of the U-95, was born in Tacoma and now lives in Bellevue. He is already established as a sportsman of note. Neither is he any stranger to racing. Racing under SCCA rules in class C & D (production) he won top honors in class for the northwest region in 1954,1955, and 1956 before his auto speed competetiveness was satisfied.

However, it is his love for boating which was ultimately to give birth to the U-95. The ideas came from his pleasure yacht, “Nothing More.” She is 58 feet loa, with a 17 foot beam, powered by twin-turbines, and with a crusing speed of 30 knots. The “Nothing More” is the largest, fastest, twin-turbined powered pleasure yacht in, the nation (some say in the world.) Jim’s experience with this craft convinced him of the feasibility of turbine power for unlimited racing.

After several discussions with the Unlimited Commission, the U-95 crew acquired an unprecedented waiver of rules plus a three-year time period in which to affirm the design concept and. race whenever and wherever the craft was ready and able.

In case you have now been excited to the point of wanting to develop your own unlimited, be advised that Jim Clapp has committed more than $250,000 to the pioneer project of the U-95, with No guarantee of any success at all.

Adding to the cost is a variety of exotic equipment being developed for the U-95 that will make it the most innovative hydro ever built. Many of the new ideas come from the aviation influence on the U-95, and to boat fans may seem like the latest pages of space news.

Because boat drivers are too busy to concentrate much on reading dials and gauges while competing, a second instrument panel not visible to the driver will be the focus of a video tape recording system, which will run whenever the boat is on the water. It will monitor readings of the 22 different systems and if something goes wrong, the tape can be played back on the shore to check the source of the problem. Next year the crew ashore will be able to follow the hydro’s systems at all times during the race. This system, called a real time data link, relays instant readings of all systems and functions to shore via radio.

Driver and crew will also have contact through a two-way radio system. The turbines make such a system feasible because they are quieter than conventional motors.

Also planned is an aural warning system that will put a beeping noise in the drivers headset and a warning light on the control panel.

Even if the U-95 performs flawlessly and wins the Seafair Race and all the rest of the races this season, their job will only be partially finished. High on the list of priorities is the matter of finding a sponsor.

Finding a sponsor is the responsibility of Richard Friel, formerly with Lear Jet, Inc. and now in business for himself here in Seattle. From his Norton Building office, overlooking Elliot Bay, he discussed the quest for backing. At this point he is working from a list of prospective sponsors, all national major companies. Dick expressed great optimism, for the sport of hydro racing, for the U-95, and for finding a sponsor. “We have four advantages,” said Dick. “We are a young team, we have made use of Aerospace technology, we are a hometown team, and we came from nowhere so we are free to experiment all we need to.”

“We have five goals. One; is to be there at Seafair. Two; is to float our boat. Three; to qualify. Four; is to not go crazy. Five; is to secure a solid national sponsor.”

So — U-95, super-boat, may not float. But then again, that’s not too likely, considering the tests its already been through. And it may just be, and this is far more likely, that it will be the hottest boat ever seen in hydro racing.

U-95 will be piloted by one of Seattle’s favorite and most talented drivers. Leif (pronounced: Layfe) Borgerson, has 18 years of boat racing experience. He is only 27 years old. He is an auto mechanic by trade, but has progressed to the point that anything with a motor, seemingly, he can handle. Leif placed second in the 1968 Gold Cup, setting the Gold Cup qualifying record of 116.883 mph. He received the Mike Thomas Award in 1969, and again placed second in the 1970 Gold Cup race. Due to the complexity of the systems involved with U-95 and their relationship to aviation, Leif learned to fly to gain further understanding of the systems.

How good is the U-95? How fast? How long will the engines hold up? How will it perform in a race? No one really knows. But from testing, its estimated closed course speed is about 135 mph. Its estimated top speed is just over 160 mph. The goal of the crew is to vary the speed of the boat as little as possible, running down the chute at about 150 mph and average 130 mph. And that will be a record on any course in the country!

Super boat, flying wing, whatever you choose to call the U-95, it is a thunderboat without thunder of its own—and you can bet it will be out to steal everyone else’s thunder as it streaks down the course like lightning.