We are nearly halfway to our initial $10,000 start up fund to restore the 1979 Miss Circus Circus 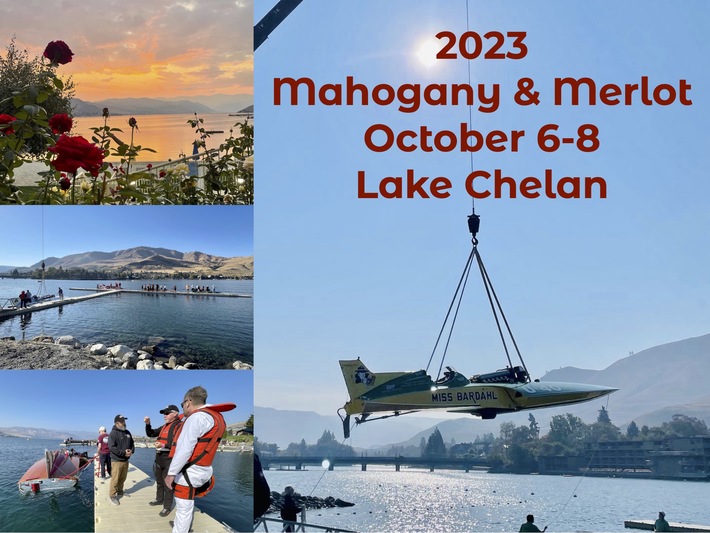 Museum member Doug Ford has sent us this great tribute to his good friend Don Edwards.

Don Edwards may not be a household name among currant H-1 fans, but there is a strong case to be made that without Don Edwards, H-1 racing wouldn't look anything like it does today. Edwards, a true racer and innovator, quietly passed away on December 6, 2022 at 83 years old after a long battle with cancer.

Don grew up in Santa Barbara, California, where he became a young drag boat enthusiast.  Stepping into the sport with both feet, Edwards helped to shape the drag boat sport virtually from its inception.  As a competitor, Don built quite a reputation as one of the best in the business, winning many races, and setting the mark with his drag hydroplane Golden Komotion by winning four National Championships between 1965 and 1967, and making Golden Komotion the “Winningest Gas Hydro” drag boat in 1967.  Don had become well known known for his innovation, his dedication and participation in working for the benefit of the sport, Don is often mentioned as part of a group of racing luminaries including: Keith Black, Dave Zeuschel, Gary Gabelich, Ray Caselli, Rudy Ramos, Rich Hallett, Ed Pink, and many others.

But, Don had another dream.

Don had joined the Coast Guard following high school, and was on a cruise in the Seattle area in 1961, which coincidently occurred in August at the time of the Seattle Seafair Trophy Race for Unlimited hydroplanes.  He remained infatuated with the Unlimiteds, and hoped someday to own and drive one.  So, at the end of the 1967 season, Don made the decision to retire from drag boat racing, and focus on his dream to build and race an Unlimited hydroplane.

Working with his good friend Rich Hallett, designer/builder of Lee Taylor’s jet powered Hustler, holder of the then current world’s water speed record at over 285 miles per hour, Edwards and Hallett decided on a similar design to Hustler, albeit it larger, for what would become Don’s new Unlimited hydroplane, Golden Komotion.  As the new boat would be propeller driven, Don knew that they needed a powerful engine to be competitive.  Hallett wasn’t particularly interested in using typical World War II aircraft piston engines, such as Allisons or Rollys Royc Merlins, and he and Don knew that automotive engines wouldn’t provide the needed power and low-end torque. So they began to research the possibility of using turbine engine power.  But, at that time, finding one available at any price became problematic.

After doing considerable research they found one available at surplus, an Allison T40 which Edwards was able to purchase for $1,500.  However, this was an experimental engine, and it came without any documentation, records, manuals or virtually any information at all.  The T40 was actually two Allison T38 engines coupled together at the gearbox, driving a single output shaft.  The motor was capable of developing an awesome 5,000+ horsepower, and could clearly propel the new boat at more than competitive speeds.

No one had ever tried to build a turbine powered Unlimited before, so as the detailed design evolved so did may engineering challenges.  The resulting design was for a hull that featured driver positioned forward, a cabover, 30-feet 2-inches in length with an 11-foot beam.  Built entirely of Dural aluminum, it was going to be strong, which clearly it had to be to handle the brute power of the Allison T40.

When it was time to perform some systems integration and testing, the team moved carefully as neither Edwards nor Hallett had any manuals and other information about the T40 engine, and neither had any experience with turbine powerplants.  They had only started the T40 a few times, and it had always appeared to be working properly.  So, with the engine installed, the boat was wheeled out of Halletts’ garage into the driveway for a test start.  In a flash, something went terribly wrong and the engine exploded sending molten metal and turbine blades all over Rich’s driveway.  Fortunately, no one was injured, but the engine was totally destroyed.  The cause of the accident was later determined to be foreign object damage (FOD), probably a stray bolt or rock inside the engine when it was started.

Edwards began a lengthy search for a replacement engine, but the search yielded nothing.   Don finally put the project on hold and eventually cancelled it – a sad end to a project dream, and the end of the first Unlimited hydroplane to be powered by a turbine engine.

Don retired and lived with his wife, Lydia, in Solvang, California, where he spent his time coordinating boat racers’ reunions and vintage boat shows in California, and restoring an original Hallett wooden drag hydro.

A true sportsman, and a very nice man, Don loved the sport and the people within it.  He gave a lot of himself.

Don Edwards will be missed.

The Hydroplane and Raceboat Museum has loaned the 1982 AVL to the MO8or Sports Hall of Fame of America in Daytona, Floraids for one year. Here is a copy of the Motorsports Hall of Fame of America's press release:

"The newest Motorsports Hall of Fame of America (MSHFA) exhibit arrived in a big way today. The 1982 World Champion and Gold Cup-winning

Atlas Van Lines unlimited hydroplane, driven by inductee Chip Hanauer (MSHFA Class of 1995) and then owned by Fran Muncey (MSHFA Class of 2021), is on loan from the Hydroplane and Raceboat Museum. Huge thanks to David Williams, John Goodman and the incredible team at this outstanding museum in Kent, Washington for lending us this prize, and Jim Hyatt who trailered the boat on its more than 3,000 mile journey the MSHFA. Levy, Cooper and Hyatt are pictured with former IMSA President Scott Atheron, a member of the MSHFA Board of Directors, who was another big part of bringing this amazing treasure to the MSHFA."

Holidays are a time for generoisity

As you plan your year-end giving, please consider donating to The Hydroplane & Raceboat Museum! The last two years have been challenging for everyone, especially a small non-profit that spent most of that two years closed by government mandate. EVERY LITTLE BIT HELPS! You'd be surprised by what we can do with just a few dollars! Even if you cannot contribute at this time, we wish you all the joy and blessings the holidays can bring.

PLEASE USE THE LINK BELOW TO MAKE YOUR YEAR END DONATION

The Hydroplane & Raceboat Museum will be CLOSED TO THE PUBLIC from 8 AM - 5 PM on THURSDAY, OCTOBER 13TH for a Private Event.

Evening Volunteer Crews are still welcome ... dinner will be provided :)