John Skube for many years was involved in unlimited Hydros.

He died at Yakima on 21 December just a few days short of his 95th birthday.

A couple of years ago he dictated his hydroplane memories

to his daughter, Jane, my wife.

I have posted them here for all to reflect of his involvement in those early days.. .

RECOLLECTIONS OF MY YEARS IN  UNLIMITED BOAT RACING

Considering the fact that I have been requested a few times to write how and when I became involved in Unlimited Boat Racing, it got me to start thinking of all the wonderful people and boats that I dealt with over the years. Since a lot of the people became friends, I thought not only a biography but sort of a history.

It all began in 1946 when I was fortunate to meet Tudor Owen Jones, aka Ted Jones. We seemed to hit it off and we were soon working together rebuilding two or three limited boats in his basement. One night Ted said, “John, I want to get you into boat racing. I’ll draw up a plan for a “135” for you.”

Ted’s dream was to build a boat and win the Gold Cup and bring racing to Seattle. This would require a lot of money. In addition to a boat there would be needed a big shop, trucks, trailer, extra engines, crew members, etc.

In 1947 Ted met Mr. Stan Sayres, owner of a Chrysler dealership in Seattle. He commissioned Ted to build him a boat, the SLO-MO III, a limited race boat. Ted convinced Mr. Sayres he could build an unlimited that would break the world’s speed record and also win the Gold Cup.

In 1948 Ted designed the SLO-MO IV for Stan Sayers and in 1950 Ted won the Gold Cup in Detroit. Mike Welsch rode as mechanic. The SLO-MO was too large for Ted’s basement, so he had to job it out to the Jensen Boat Works in Seattle. I furnished some of the hardware at that time.

As I said, the SLO-MO IV was built in 1948-49. I remember seeing it put in the water; I think it was out at Sandpoint. Sandpoint was a naval base on Lake Washington. The boat ran at several places on Lake Washington including Hunt’s Point where Stan Sayres lived and Leschi at the foot of the floating bridge. Races were held at Leschi before the new pits were built near Seward Park.

I remember the racing at Leschi. I can still hear Lou Fageol on his flying start coming out from under the bridge. The rooster tail so high it hit the underside of the bridge. He’d come flyin’ out! I can still hear the sound of the Merlin engine! Lou drove the SLO-MO V.

As I said in those days there were two drivers in the boats and I remember a boat named THE QUICK SILVER driven by Orth Marriott. It had a Rolls Merlin engine, very powerful. During a race The QUICK SILVER began porpoising and dove into the water. The well-known announcer Bill O’Meara was shocked at the sight and began reciting the Hail Mary over the radio. Tragically Orth and his young mechanic, both from Portland, Oregon, were both killed. That was 1951.

Some of the good old boats that were around in those days were THE PEPSI (a displacement boat), THE HURRICANE, THE QUICK SILVER, THE SUCH CRUST. Etc. THE SUCH CRUST was owned by the Schaeffer family and another good boat was THE GALE, actually there were several GALES, they were owned by the Schoenith family. One of the popular drivers they had was “Wild Bill Cantrell”. Not all the boats then were three-pointers (hydroplanes), there were still displacement boats being run.

A short time later the Jones-Sayers relationship ended. Soon Mr. Willard Rhodes of Associated Grocers and the Thriftway Stores became interested in race boating. Ted invited me to go along with him to Willard’s home in the Seward Park area.

Some time later a design was made and Ted became the manager of the Thriftway Racing program. A shop was located at the Associated Grocers complex at the south end of Boeing Field. Ted assembled a highly talented crew and soon work was begun. I was commissioned to do the boat hardware. This included engine-mounts, rudder, struts, shaft log, rudder post brackets, skid fin, water pick-up tube, carburettor adaptor and gear cases and custom foot pedal, some minor brackets, some steel and some aluminium, etc.

As Unlimited racing became more and more popular more people got into it and I was getting more calls, mainly for rudders. I must say at this point before I took on an unlimited rudder, I consulted with a foremost metallurgist, Alex Finlayson. He formulated a metal he called “fibraloy”. It could be thin, able to flex a bit but never crack. Due to the shape of my rudder it eliminated play at the steering wheel. They were all x-rayed and magna-fluxed particle tested, etc. I was very confident of their safety factor. After the SLO-MOS and the THRIFTWAYS, several new boats were built and wanted my hardware. Some of these boats included:

PRINGLES, REBEL-SUH, SOLO AND MISS BUD (from Australia), MISS US,

THE TEMPEST, PRODELCO and PRINGLES

This combination history and biography is being written in the year 2012 and it is difficult to comprehend that for me it all began sixty-six years ago. We met and became friends with the Jones family, Ted and Jane and their children, Ronnie, Joanne, and the twins, Sharon and Shirley.

During the next several ensuing years boat racing was a huge event in Seattle and across the country and I stayed involved up to 1990. During all those years I had dealings and also became friends with many owners.

Following is a list of people I was fortunate to be associated with and work with, all highly knowledgeable and talented. These included airline captains, test pilots, boat builders, super engine mechanics, military colonels, etc. Many of these fellows became crew chiefs and besides working with them, many became friends for years:

Before this writing is ended, I would like to add a little more history. Throughout the 1920’s and 1930’s the big name in speed boating was Gar Wood. He was breaking speed records that stood for years and racing mostly against people from England. In 1958 Gar Wood came to Seattle during SEAFAIR week. I was asked to escort him around the pit area. After a tour, we sat down for a while, my daughter Jane was with me. We were able to have a nice chat and he told us how he became interested in boat racing when he was just a kid in Detroit.

Garfield Wood was born Dec. 4th 1880. His father was a ferry boat operator on Lake Osakis, Minnesota, so Gar was exposed to the water at an early age. He purchased a boat in 1916 and in 1920 he set the world speed record for a boat. He went on to form his own business in boat building and dominated boat racing for many years. He was a brilliant man.

I hope this story will stir-up memories for the readers of many great guys that made boat racing what it was.

Fortunately for me all this history happened due to the fact that I became a friend of Ted O. Jones sixty-six years ago. I have learned that it is important to follow your bliss in your life and you will never regret it. This photo was taken in 2009 at the Hydroplane Museum in Kent, Washington. I am talking with David Williams the executive director of the museum. This is me with the SLO-MO-SHUN III at the Hydroplane Museum in 2009. 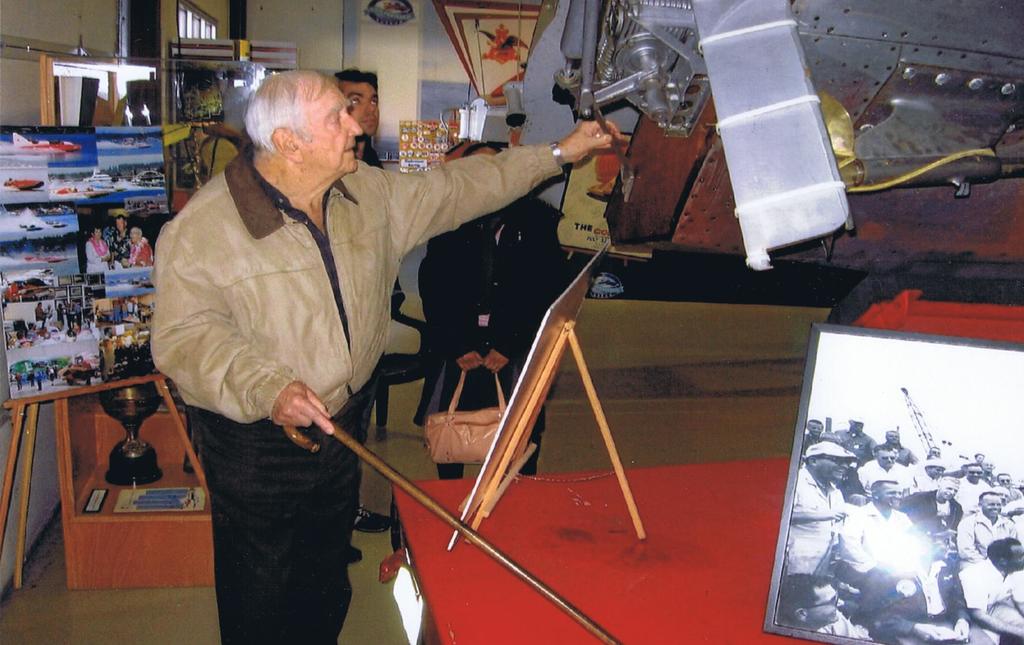 Here I am explaining the equipment I made and supplied to the boats. I thoroughly enjoyed my association with the boats and certainly met some great guys and made some terrific friends over the many years. 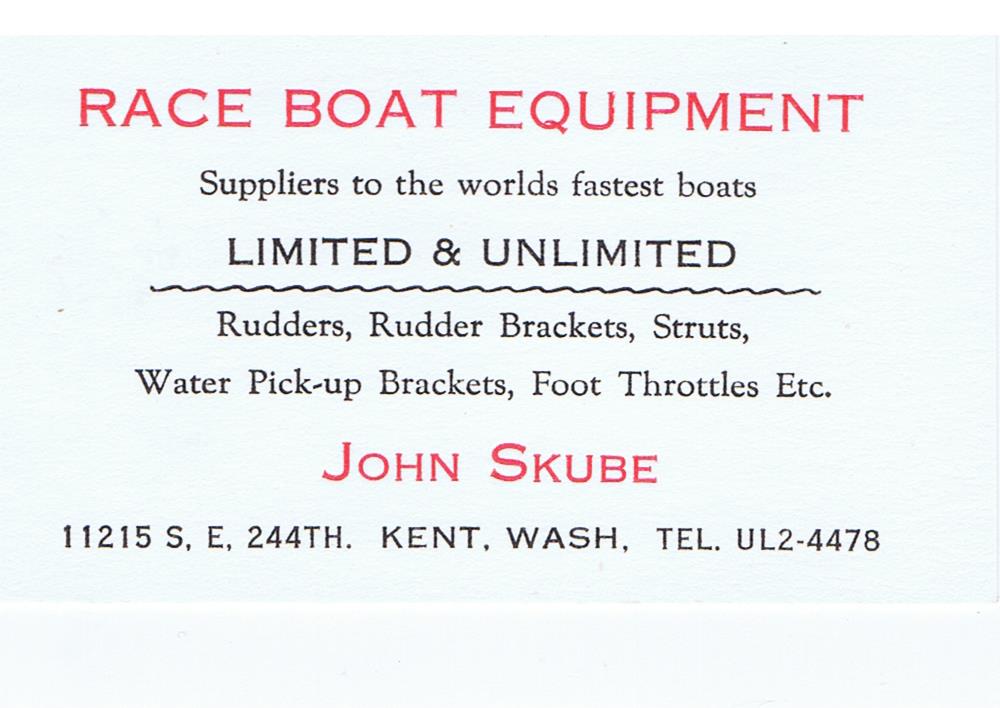