Unlimited hydroplanes, the powerboats that attract hundreds of thousands of fans when they race, have always had two very tidy certainties associated with them. One is that they make a particular sort of ear-splitting noise. Promoters like to refer to it as "thunder," and the vessels themselves as "thunderboats." In fact, the sound is more like what you'd expect a power mower to make while running over a titanium cat. The other distinguishing feature of a hydro has always been that, like the flat stones that skip elegantly across a pond when you throw them just so, there comes a time when they'll simply refuse to go any farther. 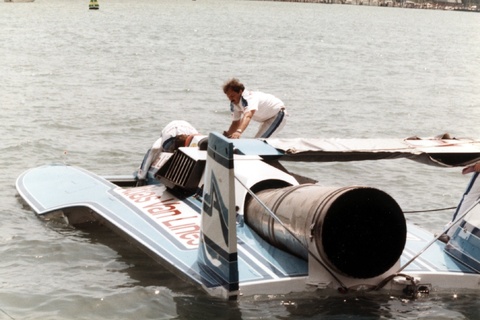 Boats usually stop for two reasons. A hydro often quits because of some glitch in its overworked, piston-driven World War II surplus aircraft engine. But occasionally a hull experiences what's called a blowover. At very high speeds a driver feels his front end "getting light," feels the boat "lose its trim," and, usually, feels nothing else ever again. The boat flips over backward and the driver is either hurled clear of the boat or trapped beneath it.

When Bill Muncey, in October 1981, and Dean Chenoweth, in August 1982, were trapped under their boats and killed, the sport was suddenly stripped of its two greatest drivers. "When accidents happened, the general response had always been. 'Oh, the driver made a mistake,' " says John Love, a spokesman for Atlas Van Lines, Muncey's former boat. "But when the sport's two most successful drivers ever are lost in accidents, you wonder if the margin of error is too slim."

The hydroplane world is beginning to respond to those deaths with safety innovations, and the crews from Atlas and Chenoweth's last boat. Miss Budweiser, are leading the way. Miss Bud, which is set to begin campaigning in 1985, will have gyroscope-activated airbags in the cockpit of its new hull. And the Atlas people have revised the accepted wisdom that a driver would have a better chance of surviving a blowover if thrown clear of the boat. "We looked at film of those two accidents," says Atlas driver Chip Hanauer. "Dean's cockpit was unscathed, and the damage to Bill's was only from his leaving the cockpit. We decided the safest place to ride out a blowover was in the cockpit."

Accordingly, at the beginning of last season Atlas designer Jim Lucero began strapping Hanauer in with a five-point harness, like those in Indy cars. He set the driver's seat 17 inches lower, so Hanauer's head just peeks above the deck. He has reinforced the cockpit with honeycombed aluminum, so it, not Hanauer, will absorb more of the impact of a flip. Trim controls and a brake, added this year, allow Hanauer to make slight adjustments in Atlas's attitude when her front end starts pulling up. And midway through this season Hanauer began wearing a helmet hooked up to an air supply that could keep him breathing for 50 minutes if he were to find himself upside down in the water. "I'm curious. I'd like to see what would happen if I blew over," says Hanauer, without a trace of morbidity. "I believe in our system that much." 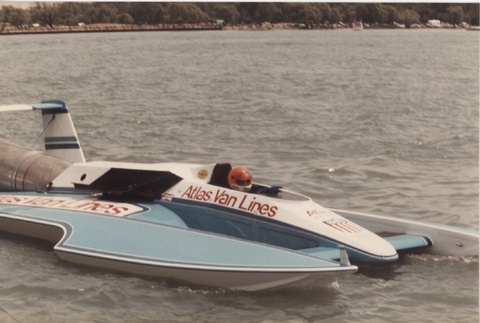 Ever safety-conscious, the Atlas team refuses to go out on a course if the conditions don't satisfy them. Naturally enough, part of their caution stems from Atlas's long association with Muncey, who drove the boat for the 11 seasons before his death; today, his widow, Fran, is co-owner. But part comes from the driver himself. "At some point you've got to decide whether you're in charge, or peer pressure is," says Hanauer, who piloted Atlas to national titles the past two years. "I'm probably considered the most non-macho guy out here. Then again, I've won more than anybody else."

Atlas is also one of three relatively quiet, turbine-powered boats on the unlimited circuit this season. Though they're in the midst of something of a teething period now, turbines have been granted the Unlimited Racing Commission's blessing to compete through 1986, and are threatening to put an end to the age of the strident water striders. A turbine has fewer moving parts, thus requiring less maintenance. It can generate much more horsepower than a piston engine for a specific weight. With the engine sitting sleek and low on the hull, a turbine boat's center of gravity is lower than that of the high-riding piston craft, making for steadier turns and sounder aerodynamics.

The cons are several. In salt water, a turbine is more likely to get gummed up with sodium chloride crystals if water gets sucked through the intake. Extreme heat reduces a turbine's efficiency. And there's a fear that, because of the turbines' enormous potential horsepower-to-weight ratios, crews will keep adding power until an engine's strength outstrips the driver's ability to control it. "How far is up?" says Bob Steil, owner of The Squire Shop and a turbine skeptic. "Sooner or later you're going to have to put on some kind of controls." But the major objection to turbines comes from purists who simply don't like the futuristic whine they make, and are convinced fans won't come out for lightning without the "thunder." "A lot of fans grew up driving '40 Fords, and can relate to a V-12 and an overhead cam," says Jerry Zuvich, a URC official. "How can you call turbines 'thunderboats'? You actually hear their propellors whistle and hulls tap on the water."

Could the sport, which features regattas called Thunder on the Ohio and The Thunderfest, survive tour stops called Whistle 'n' Tap on the Ohio or The Whistle 'n' Tap Fest? "Put it this way," says Steve Reynolds, who pilots the turbine-powered Miss Tosti Asti. "Would you relate as well to a World War II surplus aircraft engine? Or to something you saw on the screen in Star Wars? A turbine is still a very spectacular thing to watch, because it's so quiet and going so fast."

The new power plants still have a lot to prove. Atlas won the prestigious Gold Cup in Tri-Cities, Wash, on July 29, and Miss Tosti Asti, though affected by salt water in the opener in Miami, has turned in several respectable runs. But the other turbine boat on the circuit, Lite All-Star, which is driven by the ill-named Tom D'Eath, has finished just four heats all season. The Lite All-Stars themselves might describe the turbines' year thusly: Raced great, less thrilling; raced great, less thrilling.

Still, even Bernie Little, Miss Budweiser's owner, is talking turbine, even though his Rolls-Royce Griffon-powered hull has led the circuit most of this season. He's considering running two boats as Miss Bud next year—his heavier. Rolls-driven hull in the salt-and rough-water events in the East, and a lissome turbine on the mostly glassy stretches out West.

Platooning boats would cost scads of dollars, which Little has, and it's something the rules, as currently written, would permit. "I'd love to whip everyone with Griffons," Little says. "It's in my blood. But we're not going to be so stupid as not to look into turbines. Just beat us one too many times and we're going to join in."