In past summers, the calm of the thumb of water called Saginaw Bay that juts down into the mainland of Michigan has been shattered by the guttural roar of sleek, skittish hydroplanes. At the wheel of these bellowing craft has been a husky, serious boatbuilder named Les Staudacher, who sees nothing unusual about taking the early evening air in a three-point, unlimited hydroplane, heavyweight of powerboat racing. "It's a real safe, comfortable ride up to 150," he said recently. "Hang, one ride in a hydroplane is worth a whole summer of playing around in a sailboat or cruiser."

This spring, however, Staudacher is fresh out of hydros to play with, done in by the fact that he is by far the most popular builder of the water monsters in the country. In past years, Staudacher has usually managed to reserve one for his own joy riding. But this year the demand for new boats is so great that he is selling everything he makes.

His woodworking shop in the village of Kawkawlin, Mich., near Saginaw Bay, has turned out five boats this winter and has orders for two more. In all, Staudacher has made 25 unlimiteds since 1948 when the class expanded into a full-scale, fiercely competitive sport that last summer drew 500,000 spectators for the Gold Cup alone. Les Staudacher rests against one the Staudacher-built hydroplanes that will race in the Unlimited circuit this summer.

Like everyone who is fascinated by the unlimiteds, Staudacher is convinced that everything about this season will come in record-breaking sizes. The field of 19 or so top boats - 16 of them built by Staudacher - will be the biggest and most evenly balanced ever to race. Owners in Seattle and Detroit - the twin poles of the sport - have never been stronger, and they have been joined by a flock of other entrants, among them Henry J. Kaiser, who is rapidly becoming a hydroplane devotee. Sixteen races, including the brand-new, $25,000 Seattle Seafair, are up for sanction, nearly twice as many as were held during last year's record season. And, for the first time in five years, the Harmsworth Trophy, symbol of world supremacy in powerboat racing, is up for grabs. Canada's young Jim Thompson, owner of the hefty Miss Supertest II, has challenged the United States, present holder of the cup.

This summer's records will be due in large part to the boatbuilding skill of Staudacher, who knows as well as anyone in the world how to build a racing boat that will stay in one piece when the propeller winds up to 180 mph. At those speeds, the surface of the water is only slightly softer than concrete, and hulls can crack like eggshells. "Racing one of those boats is a constant series of take-offs and landings," says one driver. "You sit there and hope she stays together around you." Staudacher's three master boatbuilders can whip up a new unlimited in about five weeks. The price: $15,000, including an Allison engine, the same engine that made the P-51 Mustang fighter one of the fastest planes in World War II. Add to the initial cost a good $20,000 to keep a hydro in top racing form, and you get an idea of how tense the rivalry between Detroit and Seattle has become, and what the rivalry has meant to Staudacher.

Although Staudacher's primary contribution to the growth of the unlimiteds is as a builder, he is also a designer of considerable skill. He is, in fact, the primary architect of Guy Lombardo's Tempo VII, which was by far the best boat in the country toward the end of last summer. He also designed the early Gales of Joe Schoenith, Canada's Miss Supertest II and, more recently, Kaiser's Hawaii Kai.

Staudacher concedes that all the boats designed since 1950, including his own, have been similar to Slo-Mo IV, the three-pointer designed by his good friend Ted Jones (SI, Aug. 8, 1955) that won the Gold Cup and set the world speed record for propeller boats. "About all you can do in designing one of these things," Staudacher says, "is to try something and then see what happens. If it works, you leave it alone. You can never put in a wind tunnel or testing tank the conditions you'll race against. One of our owners had a boat one time that had won a lot of races, and he had a model made of it and sent it down to be tested in a tank. The report came back from those engineers saying don't build it, it won't go!" 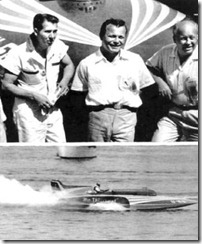 Any one of a dozen of these temperamental boats could monopolize this summer's big races. Guy Lombardo's Tempo VII would be a preseason favorite if her ace driver, Danny Foster, were not now making plans to campaign in the Canadian Miss Supertest II. (Harmsworth rules, however, forbid Foster, an American, from driving a Canadian boat in the challenge race.) With or without Foster, Tempo will be hard to beat.

Out in Seattle they're organizing a formidable flotilla to bring the Gold Cup back to Lake Washington. Last winter Stan Sayres sold Slo-Mo V, the boat that back-flipped in last summer's Gold Cup, to a group of 15 fellow townsmen who have patched her up, renamed her Miss Seattle and plan to lick Detroit singlehanded. Sayres still has Slo-Mo IV; and although he has retired from racing, no one really thinks he'll be able to stay out when the rooster tails start to fly. Groceryman Willard Rhodes, who nearly won the Gold Cup last year with his new Miss Thriftway, designed by Ted Jones, will be back with the same boat. New York Team of Guy Lombardo and Danny Foster, with Tempo VII, was hottest in circuit toward end of last season. This year Foster is planning do drive Miss Supertest II in early races.

During the winter Staudacher built three exact duplicates of Miss Thriftway for Bill Boeing, son of the founder of Seattle's Boeing Airplane Co., and Bill Waggoner, an oil, cattle and cotton heir from Arizona. Henry J. Kaiser is going about this business of hydroplanes with typical dash. His Hawaii Kai was hitting 193 mph last month in a speed trial and appeared to be setting a world's record when her rudder sheared off and she somersaulted into kindling wood, breaking the leg of her driver. Kaiser owns another hydro called Scooter Too, and has placed an order with Staudacher for a replacement of Hawaii Kai.

Back in Detroit where the Gold Cup will be run this year, the owners are well prepared for the invasion from the West Coast. The paint is hardly dry on George Simon's new Miss U.S. II. Bud Saile and Jack Schafer are both entering with twin-engine unlimiteds. But the backbone of the Detroit fleet is Joe Schoenith, a wiry, cheerful electrical contractor who has been the sport's most consistent winner over the years. His magnificently serviced Gales have won the high-point championship for the past three seasons, and last summer Gale V, driven by his son, Lee, won the Gold Cup. For the upcoming campaign, Schoenith has three lime, blue and mahogany Gales set to go: Gale IV, which was hot and cold last year; Gale V, a completely made-over version (Les Staudacher, builder) of the Gold Cup champion which was broken up last fall to provide parts for her younger sisters; and Gale VI, a hippy, two-engine craft that weighs four tons?nearly a ton and a half more than single-engine boats. Across the border at a farm on the outskirts of London, Ontario is the boat that may surprise everyone?Jim Thompson's Miss Supertest II. One grim December day just before the ice started to form on the lakes, Les Staudacher took her for a spin and came back goggle-eyed. "I thought she'd never get up to 100," he said, "but then all of a sudden you couldn't get off the throttle fast enough, she took off so. Scare you to death, you know."

Because so many owners will be racing such evenly matched boats, this summer may become primarily a contest of driving skill. "In the old days," said Wild Bill Cantrell, longtime driver and mechanic for the Schoenith team, "you used to sit there and put your foot on it and turn left." But with the coming of the Staudacher-Jones type of hydro, this method of driving not only loses races, but has become a sure route to the hospital. Now, the emphasis is on skill, as Detroiter George Simon discovered in his first race a few years back, when he tried putting his foot on it and turning left. "The water was rough," said Simon, "but I was eager. I'm going into a turn at about 130 when all of a sudden I can't back off fast enough. We took off and bounced three times, and the third time I came down I was all alone. The boat had disintegrated."

The great Lou Fageol, who gave up racing after his flip in Slo-Mo V last summer, put into words recently what many drivers have thought for a long time about these wickedly dangerous but fascinating boats. "It always scared hell out of me to drive one," he said. "And if it doesn't scare hell out of you when you get behind a wheel, you'd better not drive, because you'll kill yourself."