Rich Triumph At A Ripe Age

Gar Wood always wanted to build and race the fastest powerboats in the world. Finally, when nearing 40, he realized his ambition.

They all laughed when Garfield Arthur Wood challenged England for the Harmsworth Trophy in 1920. Wood was nearly 40, an age at which few sportsmen are found behind the wheel of an unlimited hydroplane. Besides, the English had held the international trophy (powerboating's top prize) since 1912 and were favored by everyone to keep it - perhaps forever.

Everyone but Gar Wood, who was unimpressed by his own years or the reputation of the English. He brought two boats of his own design - Miss Detroit IV (for heavy seas) and Miss America I (a faster craft, good only on smooth water) - to Osborne Bay, England, the site of the race. His practice runs in the slower boat over the choppy bay water made the British feel even more confident. But on race day the bay calmed down. Wood drove his Miss America I and won by more than a mile. 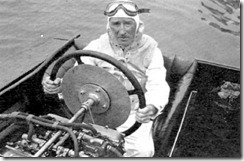 Wood and his teddy bears (right) take "Miss America X" out for a trial run.

Iowa-born, in December of 1880, Wood spent much of his youth on the water. His father, "Cap'n Walt," ran a battered ferry over Lake Osakis, in Minnesota, and whenever young Gar could break away from his chores on their small backwoods farm he served as chief crewman. "We were a prolific clan," says Wood. "I had nine brothers and three sisters. We were all brought up on the Bible, and none of us ever smoked or drank. 'Goldarn' was the strongest cuss-word we ever used!"

Wood's ambition, from early childhood, was to build and race the fastest boats in the world - and he recalls gutting the family alarm clock to power a toy craft he'd designed. ("I got a licking, but the boat ran fine.")

In 1893, at 13, he became the official operator of a government launch in Duluth for the simple reason that no one else could keep the "new-fangled" internal combustion gasoline engine in running order. Wood entered and won his first motorboat race (at 32 mph) in 1911 on the Mississippi, and within two years was racing a boat of his own make. A sudden influx of money turned his long-dreamed-of venture into reality.

Gar's leap from poverty to wealth began on land when he was working as an auto mechanic. "One afternoon," he says, "I watched a truck driver sweating and cussing as he hand-cranked his truck bed in order to dump a load of coal. I could see he needed power to do the job properly, so I got me an idea."

Wood's idea, on which he risked all of his $200 savings, resulted in a hydraulic truck hoist which proved an instant and overwhelming success. Swamped with orders. Gar opened his own plant in Detroit in 1914, and eventually became the nation's largest manufacturer of truck equipment, later branching out to include road-building and automobile accessories. This flourishing business provided the capital he needed to build his own racing boats, and after the end of World War I he purchased several aircraft engines with the intention of converting them to marine use.

Ignoring warnings that "an aircraft engine will pound a boat to pieces," he installed a reworked 12-cylinder Curtiss in his Miss Detroit III and won the 1919 Gold Cup race. In 1921, a year after his international triumph in England, he built the Car Junior II, and challenged the Havana Special, one of the country's fastest trains, to a race along the Atlantic seafront from Miami to New York. Encouraged by cheering crowds along the route, Wood beat the train by several minutes. He ended the year with his first victorious defense of the Harmsworth Trophy with Miss America II.

Three years later the man they now called "The Water King" defeated the Twentieth Century Limited in a race down the Hudson. And in 1926 he again turned back all overseas opposition for the Harmsworth.

Accepting a fresh challenge in 1928, Wood set out to test-run his latest speedster, Miss America VI, on the Detroit River. His two mascots went with him on the run (a pair of helmeted and goggled toy Teddy bears he always carried for luck). At full throttle, slashing the waves at over 100 mph, the boat abruptly exploded and disintegrated, pitching out Wood and his racing companion, Orlin Johnson. Wood recalls: "I felt myself sinking down-and I could see tanks, pieces of splintered planks whirling around me. I almost blacked out, but managed to claw my way to the surface and grab a gas tank. Orlin floated up unconscious, his jaw smashed."

Within 14 days, despite the fact that he had to fish the sunken engines from 90 feet of water, Gar designed and constructed a new racer, Miss America VII. Then, smothered in bandages (with Johnson beside him, his head in a cast), he beat his competition on the Detroit River and kept the Harmsworth Trophy.

A frustrated England became fiercely determined to win back the trophy- but Wood successfully defended it in 1929 and 1930 with even faster boats. In 1931 an all-out effort, sponsored by the British government and spearheaded by Lord Wakefield, sent the auto-racing veteran Kaye Don against Wood in the very fast Miss England II.

"We met him with two boats," says Wood. "My brother George handled Miss America VIII while I took over with Miss America IX. That was some race!"

The first of three heats had gone to Don, with Wood trailing close in his wake. In the second heat, knowing that every inch of water was an advantage, both pilots jumped the starter's signal and throttled toward the first turn, with Wood slightly ahead. In a wild bid for the lead, Don attempted to cut across Wood's wake to the inside at the turn. But the Englishman had misjudged.

"That six-ton hull of his just seemed to leap up, straight out of the water," says Wood. "Don was hurled clear before she sank, and he survived. They disqualified me for that jump start since we'd both exceeded our 'leeway' of five seconds. But my brother won with our other boat, so we still held the trophy."

By 1932, however, Wood realized that he could not hope to maintain the trophy for another season unless a super-fast craft could be developed. England was sending Don back with a giant speedboat reputed to house 6,000 hp. The U.S. newspapers were pessimistic: "Wood stands alone against an Empire which has spent millions to defeat him. How long can such an unequal battle last?"

With characteristic zeal, Wood plunged into the construction of his most revolutionary boat, Miss America X, which would contain no less than four giant supercharged 12-cylinder aircraft engines with "pistons as large as paving blocks." Wood was determined to pack an estimated 6,500 hp into a 38-foot racing hull-and he developed a unique method of smoothly distributing this vast power by having each pair of side-mounted engines turning on a single shaft. Special gearboxes were built, and when Don arrived in the U.S., Miss America X was ready to meet him.

Wood was 51, silver-haired, his eyes furrowed with sun wrinkles, his skin wind-weathered; he was too old, the experts said, to handle 6,500 raging sea horses. Wood admitted that "at 100 mph the water is like a goldarn concrete slab," but he shrugged aside the dangers and climbed briskly behind the racing wheel. When the contest was over, England had once more bowed to the incredible American.

This had been proved when Wood set a fantastic water-speed record of 124.91 mph, a feat which prompted Kaye Don to remark: "No man has contributed as much to the development of water-craft. Gar Wood has made every mile of his speed count in the advancement of an industry."

Wood retired from racing shortly after the 1933 Harmsworth. Today, a robust 82, living comfortably at his $2 million 122-acre estate on Fisher Island, south of Miami, Wood still refuses to slow down. He is "working harder now than [he] was in the '30s," and actively enjoys several hobbies: astronomy (he has built a private observatory in a Moorish tower of his Florida home), deep-sea fishing (with his son, Gar Jr., who also has raced speedboats), inventing (with an experimental automotive project in the works) and, of course, boating (he still pilots an 85-foot version of the wartime PT).

The Gar Wood philosophy is simple: "All any man needs," he says, "is five things-good health, a good job, a good wife, a good religion and at least one goldarn good hobby."