Today, half a dozen of America’s blue chip sportsmen have their eyes fixed on a terrific speed of 200 miles per hour, a figure that was fantastically out of a reach a few years ago. None one expects to drive a boat that fast in 1951 but several men are building boats that, on paper at least, can be driven at 175 miles per hour. They hope to prove it this summer.

Ostensibly, the boats are being groomed for the Gold Cup race that is scheduled for August 4 on Lake Washington, Seattle. Actually, if a challenger finds in trial runs that his boat is capable of 175 miles per hour, he’ll burn up the wires arranging for an official crack at the record. The reason for this sudden competition is that an almost unknown boat of unique design, Slo-Mo-Shun IV, last year set a new world record of 160.32 miles per hour. It added almost 20 miles per hour to the record 141.74 miles per hour Sir Malcolm Campbell made in his Blue Bird II in England in 1939.

Blue Bird was a costly creation, designed and built solely to capture the world speed record. Slo-Mo-Shun, on the other hand, is suitable for closed-course racing as well as for speed dashes. Stanley S. Sayres of Seattle, its owner, uses it almost like a family runabout. All of the new contenders for the world championship are being designed along the same general lines of Slo-Mo-Shun’s hull.

One of the secrets of Slo-Mo-Shun’s speed is that Sayres and his designer, Ted O. Jones, found a way to prevent the hull from rising completely out of water at high speed and becoming unmanageable.

Most modern racing hulls are of the so-called three-point hydroplane design. At high speed they rise out of the water and rest on only three points: the two outboard sponsons and the stern. The trouble is that three-point hulls are too perfect, aerodynamically. There’s a tendency for the bow to swing up and flip the boat over on its back. Too, rudder control is almost completely lost when the boat is literally flying through the air. 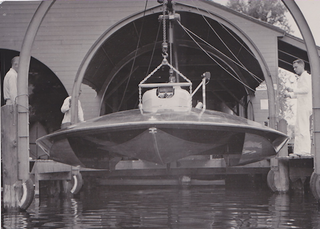 These drawbacks were avoided in Slo-Mo-Shun by providing an inverted pyramidal step under the bow, to serve as a fourth point of suspension. It acts partly like an air spoiler in the tunnel between the two sponsons. The resulting drag holds down the bow and there’s no tendency for the boat to do a backward somersault. In rough water, the pyramidal bow plane flattens and spreads the water surface so that the boat is safe at speeds at which the ordinary hydroplane would run wild or pound itself to pieces.

Slo-Mo-Shun rides so high that only one of the blades of its special $500 two-bladed propeller is in the water at a time. The boat leaves behind it a “rooter tail” of spray that is thrown high in the air and hangs for a quarter of a mile behind the boat. Slo-Mo-Shun’s 1500-horsepower Allison aircraft engine drives the propeller, through gears, at about 10,000 revolutions per minute. The step-up gearbox is bolted directly to the rear of the engine, permitting the use of a short, straight, drive shaft instead of the customary transfer drive from the bow. The deep steel rudder is mounted off center so that it moves in undisturbed water instead of in the frothy wake of the propeller.

The fastest boat in the world is 28 feet long and has a beam of 11 feet 5 inches. The plywood hull has a ½-inch-thick bottom that is sheathed in part with thin dural plating as a protection against floating debris. Unused portions of the hull are packed with foam plastic for floatation in case of a smash-up. The boat weighs 4300 pounds. To stabilize the hull and offset the effect of engine torque, Slo-Mo-Shun uses a large air fin at the stern. The fin is simply a stabilizer and isn’t used for steering.

Most of the boats being built or modified this year will use a spoiler system, but there are several other ways to prevent a hull from becoming completely airborne.

Morlan Visel of Hollywood, whose Hurricane IV has been held back by control difficulties, plans to use a hinged airfoil attached to the forward deck. Adjusted from the cockpit, it is expected to hold the nose down to any degree desired, allowing the souped-up Allison power planet to deliver full power to the propeller.

Some such balancing arrangement is to be incorporated in the boats Dan Arena of Mount Clemens, Mich., is building for various owners. Each boat will have the entire mechanical installation mounted on a pair of side rails secured to the hull with several sturdy, quick-change fasteners. The whole assembly can be lifted from the hull as a unit and replaced with a similar package in a matter of minutes. Two or more power plants for the same hull are expensive but the idea will save valuable time when testing different combinations of power and gear ratios.

The Arena-built boats are 30 feet long, have amidship sponsons, are planked with mahogany plywood, weight 4200 pounds and are powered with a single Allison 1710s. Any boats that prove fast enough in the trial runs can be expected to try for a new world record. Others that will be in the race for a record include Such Crust II of Detroit, whose Allison engine has been replaced with a Rolls Royce of greater power, and Horace Dodge’s My Sweetie, powered with an Allison and sporting a rebuilt hull for greater speed.

One dark horse in the race for a new record is Henry Kaiser, whose engineers have been working for two years on Aluminum I, an unlimited hydroplane of Gold Cup capabilities. Also in the background is Kaiser’s Hot Metal, a gigantic all-metal racing creation powered with a double Allison. This boat was built with the hope of setting a new world record at such a high speed that the mark wouldn’t be threatened for years. Meanwhile, Stan Sayres is ready to try again if Slo-Mo-Shun’s present record is beaten. He had some throttle left when he was clocked at an average of 160 miles per hour and the belief is that the boat is capable of 20 more miles per hour.

The final factor for more speed on the water is the strength of drive shafts and propellers. Slo-Mo-Shun has already thrown several propellers and even after only two passes along a mile-long course at record speed a brand new propeller usually shows fracture lines close to the hub. When propellers are built that can withstand the terrific impact of slamming into the water at high speed, and when drive shafts can be beefed up so that they don’t twist off, speeds up to 200 miles per hour on the water may be attained.

Comment by Patrick Verd on December 28, 2010 at 3:41pm
Having been born and raised on Hunt's Point, with Stan Sayres as our next door neighbor, articles like this bring back great memories !