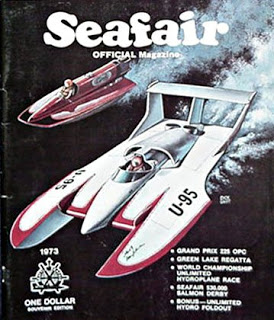 A visitor from another planet, aghast at the huddled masses in oozing mud under dripping trees, would have radioed reports of fugitives fleeing some cataclysmic disaster.

Why else would 65,000-odd (the term is explicit) earthlings subject themselves to the croup on a mired shoreline in a relentless downpour?

In fact, thousands smartened up early, slogging soggily homeward to the family hearth and a flickering screen.

And slick Mickey Remund, in quick Pay ‘n Pak, won $10,300 and the title of World Champion Fog Cutter before the sparsest throng ever to witness the finish of an unlimited-hydroplane regatta.

Five moist hours earlier, nobody would have bet a bent kopek that the World Championship Seafair Race ever would finish — or start.

Visibility was scant. After a 15-minute delay, it was only a little worse, so Referee Bill Newton thumbed the boats onto the lake.

George Henley, in Red Man II, set a fearful pattern for the day. In the opening heat, he vanished into the vapors. Rumor swept the official barge that he took a wrong turn in the fog and skidded into the Seward Park bath house.

By then, everybody on the water should have been ticketed for driving without lights.

Apprehensive drivers were advised, in their warm-up runs after the 5-minute gun, to vote whether to continue racing — thumbs up, yes; thumbs down, no.

Since no thumbs were visible through the mist, the race continued.

The field was trisected into exclusive heats for Hot Dogs, Near Misses and Also Rans.

That was supposed to make it more fun. It did — especially for Chuck Hickling in Ms. Greenfield Galleries.

Chuck amazed the dissolving multitude by graduating into the Grand Finale as the only Also Ran to finish two heats. In fact, in the only boat still running in his second heat. Chuck really finished seventh — behind six startled ducks that overtook the Ms. in the homestretch.

Several veteran hydroplane reporters, accustomed to heightening their summer tans on Seafair Race Day, capitulated to the elements. Their ballpoint pens, alas, would not write under water.

Still, in spite of the most horrendous weather ever visited on the intrepid rascals who risk their necks for glory afloat, what took place out there in murky privacy was the swiftest thunderboat race ever.

Credit Remund for that paradox.

Mickey served notice of scurrilous intent by blazing to a qualifying record of more than 126 miles an hour and then chased daring Dean Chenoweth in Miss Budweiser to the fastest 15-mile heat since the invention of the quill shaft — a foamy 122½ miles an hour.

That heat will go down in legend, though soaked shorebirds scarcely were able to discern the boats through the liquid haze.

For four laps, Bud and Pak shared the same roostertail. Melodramatically, as Remund crunched the throttle in a last-gasp try to beat Chenoweth to the checkered flag. Pak threw a propeller and shattered its shaft.

Pak thus racked up another record: This season she also dropped one propeller each to the bottom of the Detroit River and the Columbia.

In effect, that mishap — comparable to a pulled hamstring and a severed Achilles tendon for a basketball player — promoted a fractional debut for the U-95, the turbine-powered mystery skiff which was not ready for baptism here.

The Pak returned to action with a propeller loaned by the U-95. Though fitting and adjusting a propeller is one of the most sensitive operations in thunderboating, Remund drove as though the "wheel" were custom-built for Pay ‘n Pak.

Mickey’s climactic comeback victory over Chenoweth in the payoff sprint, coupled with heat earnings and $1,600 for the top qualifying speed, packed $10,300 into the Pak’s petty-cash fund.

That just about will pay for the propellers at the bottom of the Detroit, the Columbia and Lake Washington.