t was the 1979 Jack-in-the-Box Regatta on San Diego’s Mission Bay where an interesting, yet little known event took place. But it wasn’t until 35 years later that the story became even more interesting thanks to a photo that surfaced from photographer Bill Osborne. Besides a few lousy shots I took with a little cheap camera, this is the only other photo I’ve ever seen of Bill Muncey and the Atlas Van Lines "Blue Blaster" at the end of the race in San Diego in 1979. Bill Muncey and the Atlas on Mission Bay Famous promo photo taken the day before the race.

My wife to be Kathy and I had driven down from LA where we were living, and went onto Fiesta Island to the start/finish line to watch the race, one of the best places on the planet to witness and unlimited hydro race. In those days spectators could wade into the water to experience racing up-close.....real close......to the point of getting wet from roostertails. Part of the large crowd on Fiesta Island watching the racing action.
(Squire Shop, Tri-City Tile and Masonry and Atlas heading for a start)

After going dead in his first preliminary heat, Muncey won his second and made it into the final with 400 points. In the final heat the Atlas again had engine problems and died right in front of us on the second lap. As the final heat continued the wind and wakes from the other boats began nudging the Atlas toward us and the beach. Drifting within 50 feet from the beach, Bill clapped for Steve Reynolds in the Circus Circus as he roared by and took the checkered flag for the win. As the Atlas drifted even closer, in only about 4 ft of water, several excited fans rushed out and surrounded the boat to keep it from hitting bottom. Steve Reynolds waves to the crowd in a preliminary heat.

Bill must have been disappointed after loosing the race, but climbed out of the cockpit and walked around the deck leaning over shaking hands with what probably grew to 30-40 fans hanging on to the boat. I was standing just at the water’s edge thinking about wading in myself to shake hands with the legend. But just then a clearly over-zealous fan, who appeared to have made sure he didn’t have to pack any beers home with him, climbed up on the boat and jumped up and down waving like an idiot. Bill had his back to him leaning over shaking someone's hand when the drunk idiot ran over and pushed Bill head-first into Mission Bay. I was shocked and furious at the idiot and basically embarrassed to be part of the rowdy crowd. I wanted to do something but several good Samaritans helped Bill scramble back up on the boat. Soaking wet, still wearing his helmet, he waved for the tow-boat to get him the heck out of there. That’s about the time the Osborne photo was taken. I had run out of film in my camera. Soon after the tow-boat got the Atlas headed back towards the pits, Kathy and I headed to the car and back to LA. Start of the Final Heat. 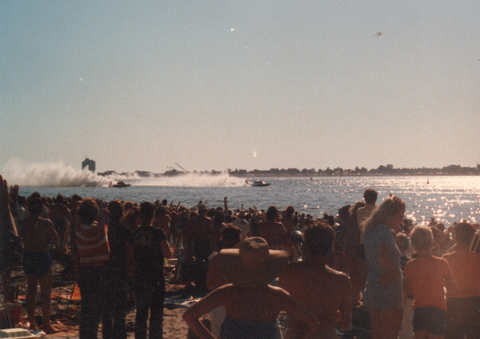 Atlas slows on lap two with an engine problem. Muncey and the Atlas float helplessly in the middle of the front stretch
near the start/finish line. Ron Armstrong zooms by in the Miss Van's PX. 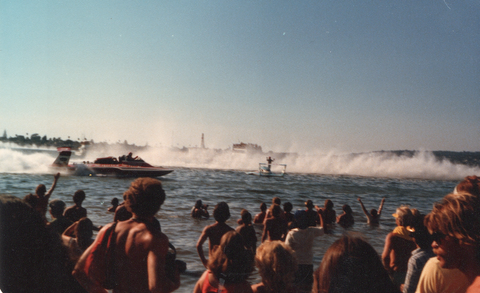 Bill waves his arms to alert drivers as Chip Hanauer in the Squire Shop finishes lap 4. Muncey watches the Dr. Toyota, the last boat to finish the final heat.

I’ve told this story hundreds of times but have never met anyone else, among the thousands of fans, who witnessed this infamous incident. And have never seen another photo besides my own.

The next photo is from Bill Osborne’s new book Fifty Years: A Personal History Of Unlimited Hydroplane Racing. Bill gave me a rough in-progress PDF copy a few years ago to check out. It’s a great book filled with many of Bill’s amazing photographs.

Moments after being pushed in the water by a drunk fan,
Bill Muncey is surrounded by the excited crowd.

Another person I’ve told this story to many times is Chip Hanauer. Chip and the Squire Shop finished 2nd in the race but he didn’t hear much about Bill getting dunked, just that the Atlas went dead over by the start/finish line. He does remember having to avoid the Blaster every lap. When I saw the Osborne photo, I immediately sent it to Chip and reminded him of the story.

A few years earlier, Chip had become involved in NASCAR, mentoring young Seattle driver Tayler Malsam in the Camping World Truck Series. Chip traveled to all the races and met several old acquaintances from his car racing years. One was Keith Koldsbaek, who worked for Hendrick Motorsports. Keith even visited Seattle in 2014. Chip brought him to the museum to see the 82 Atlas and Blue Blaster. Chip gave him a tour of the museum and a copy of the DVD about the Blaster restoration. Several crew members and drivers at Hendrick know of Chip including Kasey Kahne, so many were interested to see the video and hear about Chip driving the newly restored boat.

When the subject about Chip and the Atlas reached Jimmie Johnson, he told Keith that he knew all about Bill Muncey and the Atlas Van Lines. Jimmie had grown up in San Diego and was taken to races on Mission Bay by his dad. He also raced motorcycles with Edward Muncey as a teenager. Then Jimmie recounted one time when he was about 4-5 years old, he sat on the deck of the Atlas when it was floating in the water. He remembered that the boat had gone dead right in front of them on Fiesta Island and drifted close to the beach where his dad carried young Jimmie out to the boat and sat him on the deck. Keith relayed Jimmie’s story back to Chip who immediately sent the famous photo to Keith. When Jimmie saw the photo he was shocked to see he and his dad sitting near the back of the boat by the tail. Chip called me when he heard from Jimmie and I was blown away. I’m standing right outside the frame of the photo and after 37 years, the only person I found who remembers Muncey’s soaking was none other than Mr. Seven-Time Champ Jimmie Johnson. Chip has talked to Jimmie about going for a ride in the boat sometime, or even driving it. Jimmie loves the idea but no plans finalized yet.

Great story and photos Don!   Thanks for sharing!  Steve Ruedy