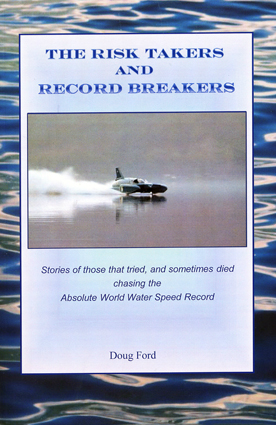 Come to the Museum on Saturday, April 6th at 7 PM and meet author Doug Ford and get your copy of “The Risk Takers and Record Breakers” signed by the author. As an added bonus hear a great new lecture by Doug! He will talk at length of those that tried, and sometimes paid the ultimate price as they chased the Absolute World Water Speed Record. Free to Museum Members, $5 for Non-Members.

The Risk Takers and Record Breakers is an accurately written anthology of the people who have pursued the absolute World Water Speed Record. That record, sometimes deadly and always challenging is presented in 24 chapters followed by an epilogue that sums up the attempts since 1928 when it all started. To clarify the danger, Ford points out that there have been 16 attempts by 7 drivers since 1952, and 5 of those have ended in fatalities.

Hydroplane fans will enjoy this history that includes Gar Wood, Stan Sayres, Guy Lombardo and Dr. Ken Muscatel.  Ford did not disappoint in the Sayres chapter with rare never before photos of the Slo-Mo-Shun IV, and likewise with great shots of Schoenith’s Gale Jet and the Guy Lombardo/ Les Staudacher Tempo Alcoa.

Donald Campbell lost his life in the last running of the Bluebird K-7. Ford chronicles the fatal run step by step, with some rare photos taken from the video of that run.

If you are buying a Holiday gift for someone who enjoys speed on the water, look no further, this is the book! You will enjoy the collection of photos and drawings that Ford chose for his book.

The Risk Takers and Record Breakers is author Doug Ford’s second book. His first book, What Were They Thinking, is also available through the Museum on-line store.

Having re-read this book now, for the fourth time, I want to thank Doug for his effort -and insight - into what it takes to set a speed record on water.

It is inspiring to me (now days) that people like Lee Taylor, Jr., Kitty O'neil and Ken Warby just "Did-It!", with or with-out help, just to DO IT!!!

That attitude is what I grew-up with, and His book personifies a sport that cultures this Spirit!