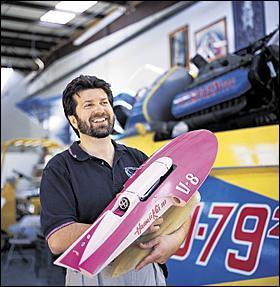 The Hydroplane and Raceboat Museum is the nation's only public museum dedicated solely to powerboat racing. Formed in 1983, our Mission:  is to inspire and motivate learning and achievement while honoring, celebrating and preserving the legacy of Unlimited Hydroplane racing. The museum features an incredible collection of vintage hydroplanes spanning seven decades, including boats that have won 17 Gold Cups.

The Hydroplane and Raceboat Museum is also the nation's primary resource for historical and educational information on hydroplane racing. Our extensive collection of books, magazines, race programs, newspaper, photos, trophies, and other memorabilia dates back to the turn of the last century. We have over 200 hours of rare, vintage racing films transferred to videotape, covering hydroplane racing for the 1940s to the present.

The stories of famous drivers are here as well. Legendary Bill Muncey, Ron Musson, Mira Slovak, "Wild" Bill Cantrell and other past drivers are featured, plus information on many of the top modern drivers, including Chip Hanauer.