"Fearless Fred" Alter drove more Unlimited hydroplanes in competition than anyone else. Nineteen of them. After retiring as a driver, he served the sport for three years as APBA Unlimited Commissioner. He also helped out on the crew of an Unlimited hydroplane, the FICKLE EYE IV, one of a bewildering assortment of lower-echelon campaigners that inhabited the Detroit racing scene in the years following World War II. FICKLE EYE made a start in the 1949 Silver Cup on the Detroit River but failed to finish.

A sales representative for the William P. Young Company in Detroit, Fred's first Unlimited ride came in 1955 with Bill Stroh's MISS DETROIT (the former SUCH CRUST V). Ray Crawford, a well-known automobile racer, was scheduled to drive in the Silver Cup. Alter was a member of the crew. After Crawford jumped the gun in the First Heat, Stroh let Alter drive in the Second. That was the start of a career that was to last for 20 years.

Fred's most successful seasons were between 1956 and 1958. He was the fastest 1956 Gold Cup qualifier and won the 1957 Detroit Memorial Regatta with Jack Schafer's SUCH CRUST III. He captured the 1956 Indiana Governor's Cup with George Simon's original MISS U.S. I and the 1958 International Cup with the second MISS U.S. I. In 1965, he won a secondary race for the South Shore Trophy at the Lake Tahoe World Championship Regatta with the third SUCH CRUST IV, which utilized twin Allison engines in tandem.

During the years of the Seattle/Detroit rivalry, "Fearless Fred" was in fact feared by Seattle fans who supposed that he and MISS U.S. I were going to take the Gold Cup away from Seattle in 1958. This was after Alter won the first two heats of that year's Diamond Cup at Coeur d'Alene, Idaho, with ease. Fortunately for Seattle, HAWAII KAI III came out of retirement and saved the day.

Fred's closest call in a race boat came at the 1961 President's Cup in Washington, D.C., when he survived a 130 mile an hour disintegration in the second SUCH CRUST IV (the former second GALE V).

The right sponson sheared off along with the entire right side of the boat during Heat 2-A. Alter was hurtled out of the driver's seat, bounced onto the Allison engine, and was thrown back into the cockpit. As Fred struggled to free himself from the rapidly sinking CRUST, a nearby patrol boat remained inexplicably motionless.

Fortunately, Bob Schroeder, who had been running 200 yards astern of Alter at the time of the crash, shut off his own boat (GALE VII), leaped aboard the quickly submerging SUCH CRUST IV, and rescued the stricken Alter.

Bob supported Fred on the sponson of the GALE VII, while a Coast Guard 40-footer finally moved in from a quarter mile away.

Alter was treated for cuts and bruises but was released from the hospital in time to watch the Final Heat. His boat, however, was a total wreck.

Five years later, at the ill-fated 1966 President's Cup in Washington, Fred Alter demonstrated considerable class in the aftermath of two fatal accidents, which claimed the lives of drivers Ron Musson, Rex Manchester, and Don Wilson. Alter went from one boat camp to another, bedding down the equipment, comforting the bereaved, and being a tower of strength for those whose courage had failed.

Fred considered the Ed Karelsen-designed MISS BARDAHL, which he piloted in 1969, to be his most competitive ride. Unfortunately, the BARDAHL's Rolls-Royce Merlin engine program at the time left something to be desired. A lot of engines blew up at only moderate speeds, although Alter managed to win two heats of the 1969 Seattle Seafair Regatta. 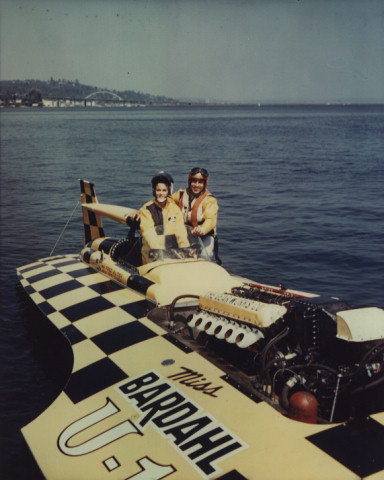 It should be noted that former MISS BARDAHL driver Billy Schumacher likewise went through a lot of engines with the same boat and with the same crew in 1968.

Alter was one of the first to recognize the potential of turbine power in the Unlimited Class. For several years, he worked with owner Jim Herrington and builder Les Staudacher in the development of the experimental MISS LAPEER, which was never entered in competition.

Toward the end of his career, Alter did some of his finest driving at the wheel of Joe and Lee Schoenith's variously named U-44 in 1973 and 1974. The U-44 was the teammate of the Schoeniths' ATLAS VAN LINES (U-71), driven by Bill Muncey.

The U-44 appeared as GALE'S ROOSTERTAIL, PIZZA PETE, and MISS CAUFFIEL during those years. On several occasions, the U-44 actually outperformed the more-prominent U-71, which was running quite poorly at the time in comparison to its National Championship year of 1972.

Fred served as Unlimited Commissioner from 1981 to 1983. He and his P.R. man Sam Cole drummed up a number of substantial sponsorships during their tenure and helped to bring the sport into the "television age."

Alter was inducted into the Unlimited Hydroplane Hall of Fame in 1983.

In 1999, he participated in the filming of the MADISON movie, which was a dramatization of the 1971 Madison Gold Cup Regatta.

Of the ten drivers who qualified for the "real" 1971 Gold Cup, which was won by Jim McCormick and the MISS MADISON, only "Fearless Fred" was available to put on the lifejacket and helmet for the movie cameras. He handled the pseudo-ATLAS VAN LINES in a few scenes. In 1971, he had piloted his self-owned TOWNE CLUB to an overall fifth-place.

Alter had been active in Offshore racing but hadn't handled an Unlimited hydroplane in 24 years. But once out on the race course at Madison, it was as if he had never been away.