The first MISS THRIFTWAY was designed by Ted Jones and built by Les Staudacher in 1954. Sponsored by the Associated Grocers chain of Stores and represented by Willard Rhodes, the 1955 hull not only represented the first step of involvement by AG for the next eight years, but it was also the starting point of Bill Muncey’s winning career. As of this writing, Bill is still on the top as the winningest driver in the sport of Unlimited Hydroplane racing with 62 wins.

MISS THRIFTWAY represented a revival of Ted Jones’ career after the controversy, and subsequent disagreement, between Ted, Anchor Jensen and Stanley Sayres regarding who was the real designer of the Slo Mo Shun boats. The four year “hiatus” was the result of a non-compete clause Ted agreed to when the Slo Mo V was built. This gave Ted the opportunity to refine his design, and put to rest the question as to who was responsible for the design that entered the west coast into the hunt for the prestigious Gold Cup.

MISS THRIFTWAY was a two time Gold Cup winner (1956 &1957) in addition to the 1956 Presidents Cup with  Muncey as her driver. These were Muncey's first wins on his way to his 62 wins! Bill was the only driver of all three of the THRIFTWAY boats.

In her first race in 1955, MISS THRIFTWAY and GALE V battled for the Gold Cup on Lake Washington. The rules in force at the time, gave the boat with the overall fastest time for the entire race bonus points. It turned out that during the final heat, Muncey in MISS THRIFTWAY was so far ahead he slowed down, and when the final tally was completed, MISS THRIFTWAY had lost the gold Cup by 4.536 overall seconds and the cup was awarded to Lee Schoenith in the GALE V. This was in spite of the fact that the Seattle-based MISS THRIFTWAY had posted heat finishes of third, first, and first, while GALE V had run second, second, and third.

The following year, in Detroit, MISS THRIFTWAY was involved in a controversy which resulted in an 85 day delay in determining the final outcome. MISS THRIFTWAY and Bill Muncey were eventually declared the winners (after the cup had initially been presented to the Detroit-based MISS PEPSI and Chuck Thompson) and the race went back to Seattle for 1957.

Muncey was erroneously disqualified for hitting a buoy in Heat Three, until TV film of the event proved that this didn't happen. (The buoy was still visible in the spray after MISS THRIFTWAY had passed it. Then, on the following lap, the buoy was no longer upright.) The matter of the buoy foul was cleared up rather quickly.

The reason for the long delay had nothing to do with anything that happened in the race itself. Horace Dodge, Jr., owner of DORA MY SWEETIE, filed a lawsuit against the APBA. He claimed that his boat, piloted by Doc Terry, had been illegally "bumped" from the starting field of twelve boats during qualification. Dodge sought to have the race declared "No Contest" and asked for six cents in damages.

Dodge was eventually persuaded to drop his lawsuit when the Gold Cup Contest Board agreed to prohibit "bumping" at future Gold Cup races.

First-place in the 1956 Gold Cup, which was run on September 1, was finally awarded to MISS THRIFTWAY on November 25.

The 1957 Gold Cup was held on Lake Washington and this time, MISS THRIFTWAY won the Gold Cup outright, without question or controversy. 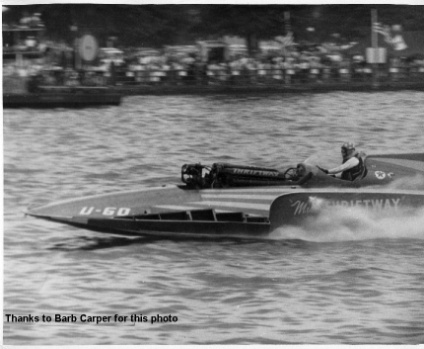 MISS THRIFTWAY had numerous deck failures which resulted in various repairs. In 1955, Muncey stuffed the nose at the Silver Cup in Detroit where a quick repair was needed . In 1957, the troubled left side had a failure at the Presidents Cup. (see photo to right)

MISS THRIFTWAY competed in a total of 13 races, winning only three of them, until her demise on September 29, 1957. During Heat 2B for the Governor’s Cup in Madison, Indiana, MISS THRIFTWAY was coming down the front stretch at an estimated 160MPH when she was launched 10 feet into the air after hitting a swell. When MISS THRIFTWAY came down, the hull broke apart and the left side of the boat disintegrated.

The fate of the destroyed hull is unknown. It is presumed that it was burned as the following year, a brand new Ted Jones hull was on the race course representing the Thriftway stores of Associated Grocers.

Fast forward to the year 2002. One evening, Museum Executive Director David Williams told a trio of Vashon Island residents, Steve Payne, Larry Fuller and Rob Wheeler about some engines rumored to be close to the Southworth Ferry dock. At the time, Larry was the Crew Chief and Driver for the 1967 Miss Budweiser, Rob Wheeler was Crew Chief and Driver of the Hawaii Kai III and Steve Payne shared duties as a loyal crew member for both camps. Rob and Steve were the fortunate ones who actually located the engines. Lloyd Jett had collected Allison engines and all the gear to build an Unlimited Hydroplane. He had an Allison V-12, a very rare W-24, Volker gear box, steering gears and linkage, gauges, mag switch, strut, stuffing box, shaft, along with much, much more. NOW WHAT?!?!?!?!?

The three talked, thought and dreamed about the possibilities. After a week of indecision, they decided to jump in with both feet. They didn’t know WHAT they were going to do with the newly acquired treasure, but knew it was rare, and it gave them most of the hard to find stuff to make a Vintage Unlimited Hydroplane run. They figured they could buy the rest!

The years of volunteering at the Museum had given them the knowledge, know-how, and contacts with people that have the knowledge to take the parts and turn them into a real live running boat! The decision was made…THEY WILL BUILD IT!!!

To this day the team is adamant that without the opportunity provided by the Hydroplane and Raceboat Museum this project would not have happened!

The three formed Vashon Unlimiteds, LLC. They contacted Ron Jones, Sr. for plans and started the process in motion. Ted Jones had lived out his golden years on Vashon Island. They all got to know him quite well, and were privileged to have known him. In his honor they decided to replicate the 1955 Miss Thriftway. After asking around, and talking to numerous people, it was determined that a restoration of an existing hull was out of the question.

Ron Jones Sr., Ted’s son, still had the original plans, so he was contracted to supply the team with a set of full-scale templates for the boat. Having the Jones family pedigree is an honor and makes this project even more special because you can’t get much closer to the original!

At of the end of 2002, the Allison’s were being completely rebuilt at Larry’s shop with the expert help, and direction of Peter Orton, H.A.R.M.s engine guru. In addition, Rob’s shop was being cleaned out so the hull could be built. 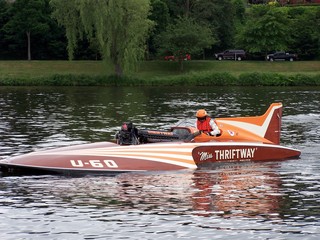 So… the next step was to start getting something to put the engines IN. Long time friend, and fellow hydro enthusiast, Stuart Jones volunteered to take the lumber list and start searching out a source. Stuart had been a long time customer of Compton Lumber, where many camps had purchased wood before, so down he went. He contacted Steve Compton and asked for a quote. While sitting in Steve’s office, the computers screen saver started to pop up pictures of, yup… VINTAGE HYDROPLANES! The next thing Stuart knew, there was a picture of the 1955 Miss Thriftway!

The engine was rebuilt during Friday nights over a period of 1-1/2 years by Steve and Dane Sorensen, Clarence Freeman, Peter, Stuart, Payne, Rob and Larry. On September 26, 2006 Peter came over and got the “F” series V-12 test fired on the test stand.

The hull build started on January 18, 2003. After a short time Compton approached the three members of Vashon Unlimiteds and asked if he could be a partner. After a brief discussion, Steve was brought on board as the fourth partner.

For 4-1/2 years the partners, along with Stuart Jones and Alan McDonough, worked on constructing the hull. On June 7, 2007 at Stan Sayres pits on Lake Washington, Larry Fuller took the new re-creation of the 1955 MISS THRIFTWAY for the first laps around the Ted Jones race course.