As we have progressed on the restoration of Bill Muncey’s Atlas Van Lines at the Hydroplane and Raceboat Museum, the topic often comes up on which year of the boat should we recreate. To the casual observer, the Blue Blaster looked pretty much the same throughout its illustrious career. But like most race boats, the Blaster underwent subtle changes from its rookie year of 1977 through its final season in 1981.

Here are some photos, courtesy of the museum showing the Atlas all five years it raced along with a shot when it was brand new taken during it’s initial testing April 1977. 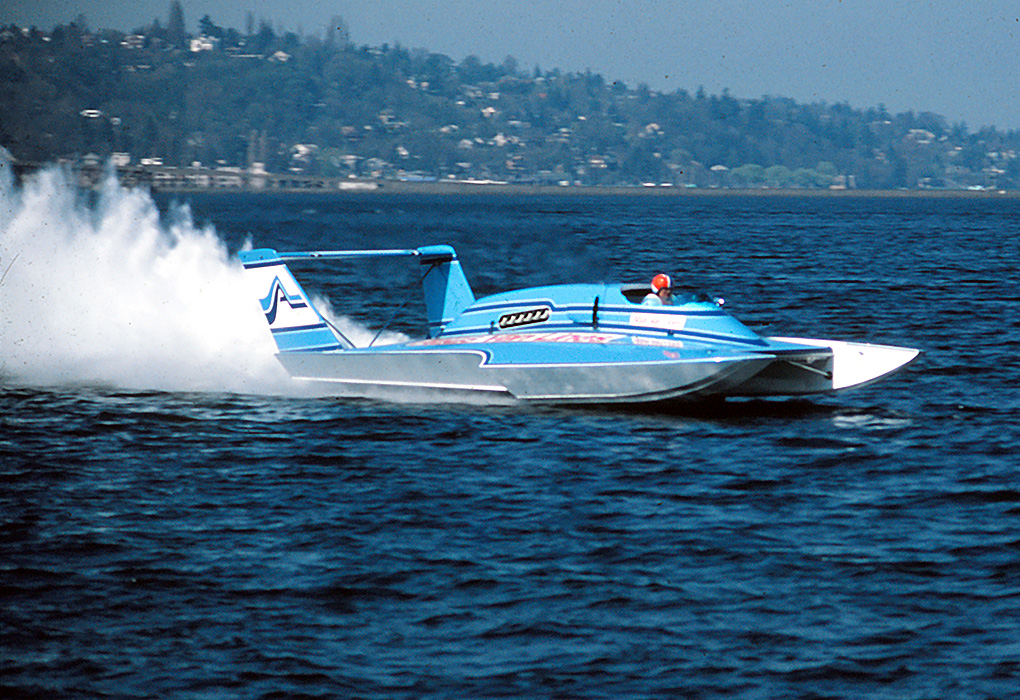 This is the original paint scheme with all light blue accented with dark blue stripes and white pin stripes. The only white on the boat (beside the bottom and sponsons) was small panels behind the Atlas Van Lines lettering. Although there were a lot of promotional photos and posters of the boat all blue, it never raced this way. The crew determined that the boat looked too dark on the water and made the decision to paint the centers of the cowl, and wings white. A great call as it made the boat pop and much easier to see on the water.

So by the first race in Miami in 1977, the boat had it’s iconic Blue Blaster paint scheme. The Atlas carried the U-1 designation painted on the wing, and a distinctive red-white and blue #1 1976 National Champion shield on the nose of the cowl. Although Muncey had a tremendous first season in the Blaster, he did not capture the 1977 National Championship. So for 1978, the team chose U-00 as the boats number. With U-00 painted on the wing, the team changed to single dark blue stripes bordering the lettering instead of the double stripes. My guess is that the U-00 was much wider, and so to make enough room, they simply eliminated one of the dark blues stripes. So if you see a photo or film of the boat and see single dark blue stripes on the wing, it’s either from 1978 or 1981 the only two seasons the boat was U-00. 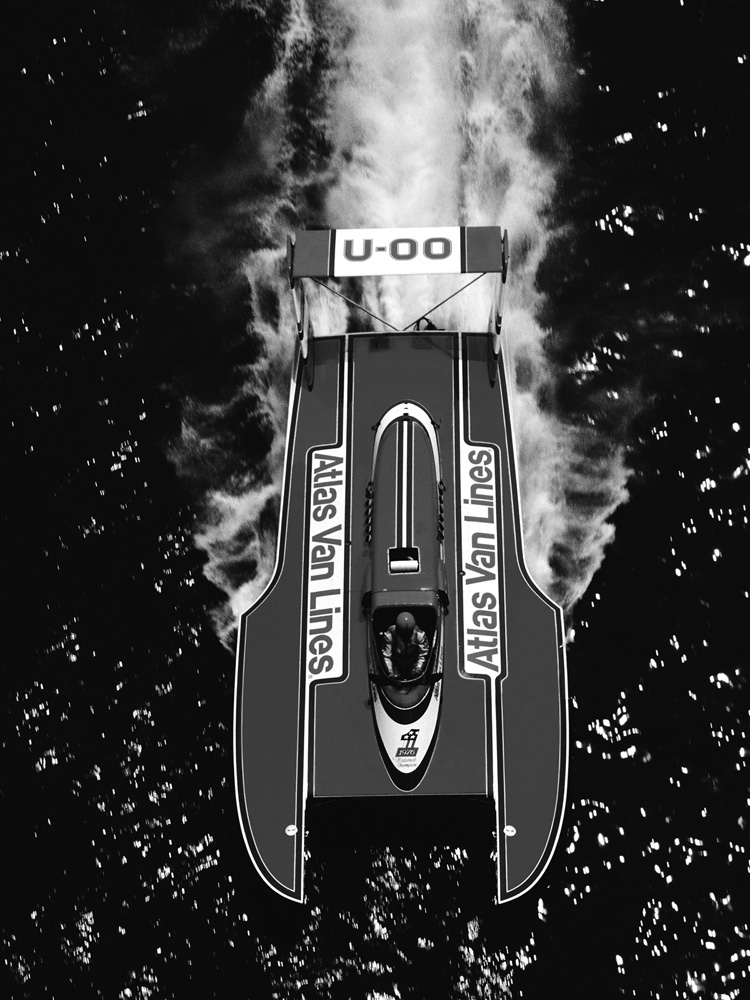 Muncey and the Atlas continued dominating the sport and again grabbed the Championship in 1978. So in 1979, U-1 and double stripes were back on the wing as well as “1978 National Champion” on the nose. 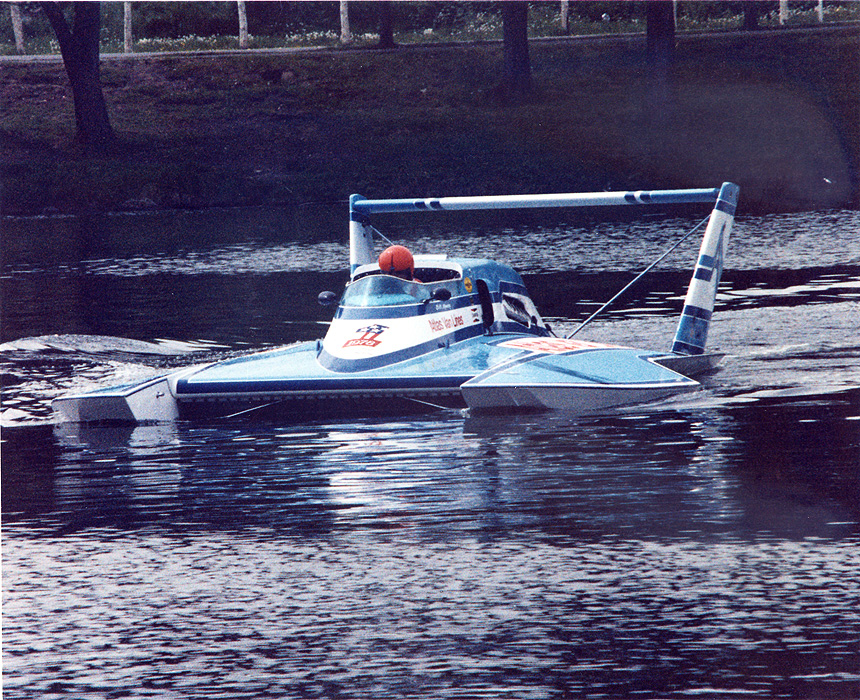 Jim Lucero had designed large air scoops on the engine cowl, one of the distinctive original details of the Blaster. But in 1980, they remove the scoops and switched to flush mounting low-drag NACA scoops. Something that has always baffled me about the 1980 cowl was that the dark-blues stripes did not line up with the stripes on the forward cowl. A mystery to how the crew could get them so far off. Also some photos show the 1980 engine cowl had no stripe along the top. Photos of the boat with the NACA scoops (painted white halfway through the season then painted dark-blue later) confirms the year as 1980. And following his win in Seattle that year, Muncey had the crew paint “1980 World Champion” on the side of the cowl for the San Diego race. Bill Muncey also promoted his association with the U.S. Navy and painted on the side, of the vertical wings of the Blaster, was the familiar “Go Navy.” The color, size and font of the lettering appeared in several variations throughout the boats career. The boat underwent a lot of repairs and changes for the 1981 season. Muncey was complaining about the difficulty he was having holding his head up while driving, especially in turns. Bill had chronic back problems and it was getting worse, so the team came up with the idea to add a headrest to the cowl. This was the most dramatic change to the look of the Blaster of its career. The headrest was mounted behind Bill’s head but only on the right side of the cowl. It had lots of padding and gave his helmet support in the turns. The engine cowl was reworked to accommodate the headrest swooping up over the carburetor scoop. A new windshield and instrument panel were also added.

1981 was also the only year the boat ran without the famous National Champion #1 shield on the front of the cowl. And this is how the boat looked that terrible day in Acapolco Mexico….. with a few exceptions. The Atlas team had bad luck at both the Seattle Gold Cup and the San Diego races that year. In Seattle Muncey had to withdraw because of damage to the bottom and airtraps of the boat. And in San Diego, a broken propeller in the final heat tore up the underside of the back of the boat. The crew had to work many long hours to repair the boat in time for the trip to Mexico. In photos of the boat following the accident, you can see the crew did not have time to paint the stripes on the rear part of the boat, only a quick coat of light blue covered the back third of the deck. 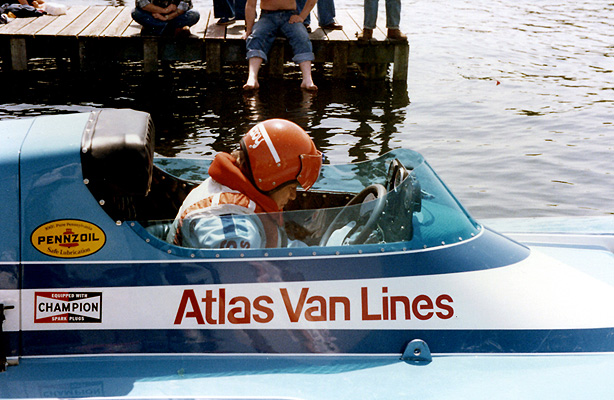 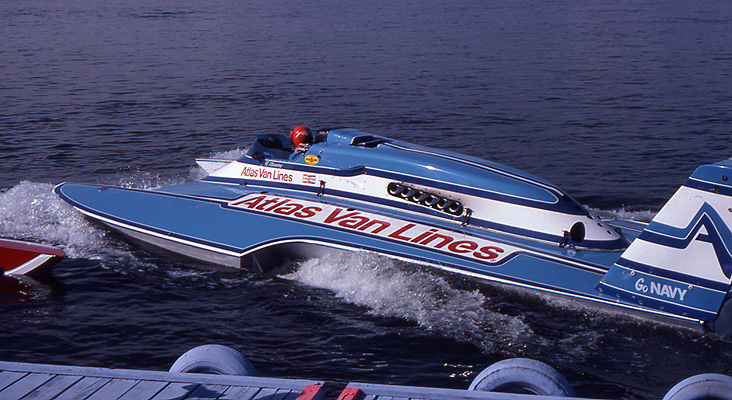 So here we are 30 years later finally giving the Atlas it's long awaited and well-deserved restoration. And before too long it will be time to start masking off the deck for the famous Blue Blaster paint scheme. Which year should it be? For me, I think I want to see the boat as it looked when Bill won the boats first Gold Cup (his sixth) in 1977. That to me is what the legacy of the Blaster should be. But I would love to hear your thoughts and opinions. Which version of the Atlas would mean the most to you?

Comment by Randall E. Roe on January 11, 2011 at 12:17pm
If Chips boat hadn't already been done, I would suggest doing the Blaster the way it looked when it won it's last race in Evansville in 1981, but I think it looks too much like the 82 boat. I say do it as it was originally built in 1977, with the blue stripe. That way it represents a moment in time, the cabover revolution.

Comment by Gary Laws on December 4, 2010 at 7:40am
Me personally, I'd like it to look as it did in Mexico as Bill last raced in it. The only change I would do would to have the paint schemes reflect what it should have looked like had there had been time to properly repaint it after San Diego. I also think the boat should be built 100% complete (running hardware, systems, etc.), but should never see water again. Just knowing the hull could be run, but never will be is enough for me. It's unlikely this will happen though, but that's a different discussion. If it does in fact run again, I think John Walters is the only logical choice to drive it..........but that's just my 2 cents.