Some photos need no explanation. But here is one, anyway.
By now, we all know and admire Chris Denslow, for both his convivial personality and his excellent raceboat photography. Not everyone knows that he began shooting hydroplanes in a meaningful way by following the R/CU circus as we raced all over the great state of Washington.
We don’t see Chris quite as often now that he has become a primary shooter for H-1, among other interests. But when he does show up, and the light is just right, you can be sure that he is going to capture some great shots of your boat, slugging it out on the race course. When and if he captures you in a blowover sequence, he almost makes it worth the repairs.
As a member of the 100% size 1982 Atlas Van Lines restoration and deck crews, I cherish the Chris Denslow photos of ‘my’ boat touring the course. As the holder of the 1/8th scale R/CU registration of the same hydroplane, I can’t wait for Monday to see his photos of my boat in action. So who could blame me for grabbing a couple of Chris’ low resolution photos of these two great warriors in action, Photoshopping them together into one terrific modelers fantasy?
It is just serendipity that Chip appears to be checking himself out as ‘he’ burns up the backstretch, ride pads a floatin’.
Marc Connelly 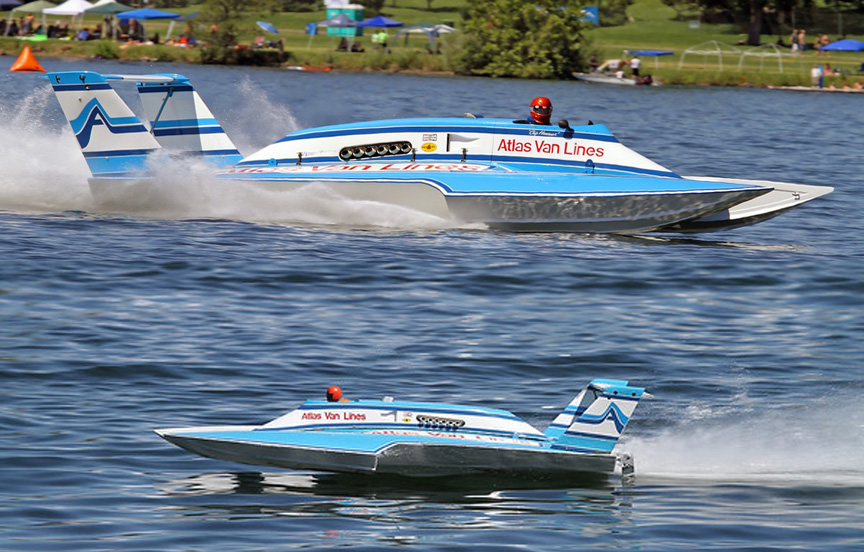 Comment by Phil Lampman on October 29, 2010 at 4:19pm
I chuckle every time I see this, Marc. Great idea for a great photo

Comment by Thomas Richey on October 29, 2010 at 8:51am
I am not normally a fan of photo manipulation, this however is really great.

You're creativity is showing through here! Way cool!!!