He raced Unlimited hydroplanes from 1977 to 1983. He drove two different MISS MADISON hulls during 1977-78 and started chauffeuring Bill Cantrell and Graham Heath’s MY GYPSY in 1979. 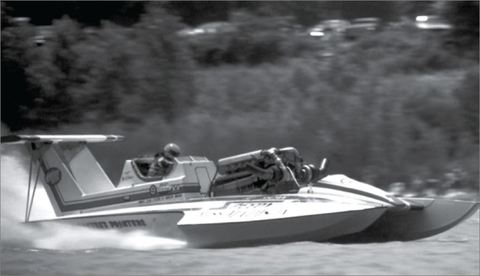 All three of the boats that Peddie drove in competition had pretty much seen their better days by the time Jon got to drive them. (Both of the MISS MADISON hulls were five years old and MY GYPSY was thirteen years old.) He nevertheless posted some pretty high finishes during his career, which is a testament to Peddie’s skill as a driver.

During the late 1970s and early ’80s, most of the major teams were changing over to cabover or forward-cockpit hulls. Jon’s boats featured the old-style rear-cockpit/forward engine arrangement. The bigger budget camps used Rolls-Royce Merlin or Lycoming turbine power. Peddie used an Allison.

When signed to pilot MISS MADISON, the veteran auto racer had never piloted a hydroplane in his life. So before the first race of the 1977 season, Jon test drove Denny Jackson’s RIDE-ON, a 280 Cubic Inch Class hydro, on the Ohio River. By all accounts, Peddie took to driving a boat the way a duck takes to water.

Jon, the first Madisonian ever to pilot the community-owned MISS M, went on to win Rookie-of-the-Year honors in the Unlimited Class. Peddie piloted “The Hurryin’ Hoosier” to fourth-place in a field of twenty boats in 1977 National High Points. He finished third overall at San Diego, CA, and fourth in six different races: Miami, FL; Detroit, MI; Madison, IN; Owensboro, KY; Dayton, OH; and the Tri-Cities, WA.

For Jon’s first few races with Cantrell and Heath, the venerable MY GYPSY was officially renamed the MISS BUDWEISER. That’s because BUD owner Bernie Little’s new Rolls-Royce Griffon-powered “Beer Wagon” wasn’t ready to start the 1979 season. In order to satisfy his contractual obligation to Anheuser-Busch, Little leased the MY GYPSY as a stand-in.

Peddie piloted the substitute MISS BUDWEISER to fifth-place at Miami and fifth at Evansville, IN.

The MY GYPSY years were special years for Jon because of his close personal friendship with his two mentors, Cantrell and Heath.

Jon Peddie’s last race was the 1983 Detroit Thunderfest. Sponsored by DOBSON THE MOVER, MY GYPSY crashed in splinters during a test run. The boat was totaled but Peddie fortunately was not seriously injured.

Long retired from the hydroplane sport, Jon still had a soft spot in his heart for Unlimited racing and the people in it. When Bill Cantrell died in 1996, Peddie did not forget his old friend. Jon helped to erect a memorial plaque in the Madison pit area in Cantrell’s honor.

I was sorry to hear of Jon's passing.  I had the pleasure of meeting and visiting with him during my first visit to Madison in 2013.  He was the type of person who made you feel like an old friend.

He was able to fill me in on some history of the 1971 Miss Madison, particularly the on-the-road accident that the boat was involved with in Georgia at the start of the 1970 season.  The subsequent rebuild by Staudacher was key to her successful 1971 season.

Thanks Jon for your friendship,