Mira was born in Cifer, Czechoslovakia on October 25th 1929. When Mira was only 9 years old, the Nazis overran Czechoslovakia and Mira and his family had to live with the horrors of the Nazi occupation followed by the equally bloody Russian Liberation.

After the war,  Mira joined the Czech Air force when he was just 17 years old and became a twin engine bomber pilot by the age of 19. When a communists coup toppled the Czech government and all Czech officers who had served in WWII were purged, Mira found himself promoted to Captain at only 21 years of age. The Czech Air Force loaned him to the civilian Czechoslovakian Airlines and he became an Airline pilot.

Mira couldn’t stand the oppressive life under communist rule, and on March 23rd, 1953 he and a small group of conspirators hijacked a DC-3 that he was piloting on a regularly scheduled flight out of Prague, They flew it to Frankfurt, West Germany and were granted asylum. Mira brought with him a treasure trove of valuable information and was immediately embraced by the Western Media as a Cold War Hero.  In December of 1953, Mira was brought to Washington DC by the CIA and spent another six months working for the agency from a safe house in Georgetown. In spite of Mira’s extraordinary cooperation with the US Intelligence community, Mira, because of his communist background, was still legally barred from getting a commercial pilot’s license. In spring of 1954, Mira was given a job flying as a crop duster for Central Airways of Yakima, Washington.  After 2 years with Central, Mira was hired by Bill Boeing Jr. to be his personal pilot. In spring of 1956, Bill Boeing Jr. decided to get into the sport of Hydroplane Racing with a brand new hydro named Miss Wahoo.   Bill offered the driving job to Mira. Even though Mira had never been in any boat faster than a kayak, he jumped at the opportunity. Mira and the Miss Wahoo were a winning combination taking first place in the 1957 Mapes Trophy in Reno Nevada. In 1958, with the Wahoo  out for the season having  her Allison engine traded for a Rolls Royce Merlin,  Mira took over driving the Miss Bardahl and steered her to a National Championship! In 1959, Mira was back in the Wahoo and won the prestigious President’s Cup which brought with it a chance to meet President Eisenhower.  Mira continued to be a darling of the national media with stories appearing in Life, Time, Look and Sports illustrated as well as appearances on national TV shows like “This is Your Life!”

In 1959, Mira was hired by Continental Airlines and in January of 1960 was finally granted his US Citizenship. Mira’s love affair with the Wahoo ended abruptly on August 8th , 1960 when the boat rolled over and crashed during Seattle’s Seafair race.  Mira returned to racing in 1963 with the fast but ill handling Miss Exide. In only her second race, Mira had the Miss Exide up front battling with Bill Muncey and the Miss Thriftway for the lead when the boat crashed in a horrific nose dive. Mira was badly injured.

Mira temporarily stayed away from boats but couldn’t stay away from racing. In 1964, he piloted Bill Stead’s Miss Smirnoff Bearcat to first place in the inaugural Reno Air Race.

Mira was back in the hydros for 1966, driving Bill Harrah’s Tahoe Miss to four victories including a Gold Cup and National Championship. During the western swing of the unlimited circuit, Mira 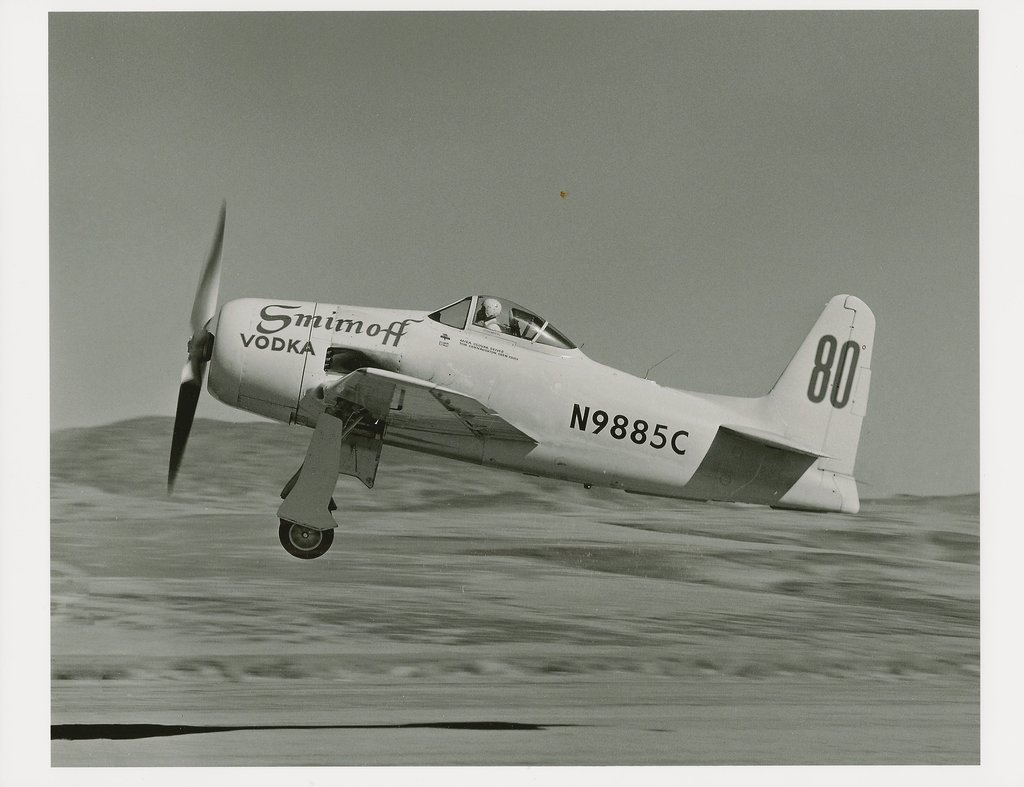 would entertain the fans between heats flying a breath taking acrobatic routine with his Bucker Biplane. Mira’s last competitive season in hydros was 1967 when Mira filled in for an injured Bill Sterett  in the Chrysler Crew, winning the 1967 Seafair Trophy.

In 1967, Mira became a 707 Captain and his new job responsibilities forced a cut back in his racing. Mira switched gears from flying as fast as possible to flying as slow as possible. In May of 1968, Mira flew to Germany and took delivery of a brand new Fournier RF-4 glider with a 32 hp Volkswagen engine. Mira flew solo across Europe, the Atlantic and most of North America. On May 25th 1968, he stopped at Lake Tahoe to test drive Bill Harrah’s  Harrah’s Club hydroplane with a new Griffon engine. On May 26th, he flew to his home airfield in Santa Paula, CA. He was on his final approach, after a trip of over 8,000 miles. He was within 20 feet of the runway when a wind shear caught the glider and he crashed.  Mira was badly injured and in a coma for several days. Luckily he made a full recovery, repaired the Fournier and the next year, flew the trip back from Santa Paula to Europe, winning prize of £ 1,000 from the London Daily Mail for the best performance by a plane of less than 5,000 pounds takeoff weight.

Mira continued to fly for Continental Airlines for many years, and eventually moved up from 707s to DC-10s and 747s. He also continued to fly acrobatic shows in his Bucker and also with his LF-107 Lunak glider.

In 1971, Mira bought a P-39 Air Cobra and modified it for racing. The plane was sponsored by George Mennen of the Mennen cosmetic company and was called “Mr. Mennen.”  The plane arrived too late to compete at the 1972 Reno races but Mira was allowed to fly a series of exhibitions.  Mira became embroiled in a long running dispute with the FAA when a mechanical problem forced him to land on a taxi way. Mira disputed his suspension all the way to the US Supreme court!

Mira retired from Continental Airlines in 1986 at the age of 56. He then began a lucrative career importing and selling airplanes. He was particularly successful with the Czech built Delfin L29 jet trainer.  By the end of his career,  Mira had logged 38,585 hours in the air in every type of plane imaginable from fabric covered biplanes to large multi engine jumbo jets and everything in between.

In 1986, Mira and long time companion Ingrid Bondi moved in together.  The two had met in 1959 when Ingrid was a young blonde flight attendant from Sweden struggling to learn English. In Ingrid’s words “I was very attracted to him! And he wanted to take me out very badly too, but I said No, because he was too fast. With all of his planes and boats and girls, I just had to wait for him to slow down.”  Ingrid’s patience paid off because once they finally moved in together they became inseparable, spending the next 28 years together.  Although they never married, Mira described Ingrid as, “The Love of his life!”

Ingrid was by his side Monday morning June 16th when Mira passed away. A pilot to the very last, Mira waited until 7:47AM to go.  At Mira’s request, there will not be a memorial. He has asked that his ashes be scattered over the “warm” Pacific Ocean. (He said that he spent enough time flying over the cold Atlantic and that he wanted to end up in warm water.)

In a brief eulogy penned by well known Aviation Writer Richard Bach, Richard says, “What a grand life he has lived!  And what a joy of one that he has returned to!  Our delight flies with him, magnificent, unafraid. Congratulations on your life, Mira.  Well Done!”

Beautifully written David. As you know, as part of the museum membership I had the opportunity to spend a little time with Mira over the past few years. I worshipped him as a youngster and came to greatly admire him in the few recent years I came to know him. There will never be another like him.

If only modern sports could have athletes and gentlemen like Mira, the World would be a better place. He will be missed more than current generations will ever understand. He will never be honored in Cooperstown, Daytona or in Canton, but he will forever be remembered in the hearts of those hundreds of thousands who crowded the shoreline in Seattle, Detroit, and other venues in the sport we still follow with interest and excitement.

He is still my hero.

Comment by Thomas Monahan on July 9, 2015 at 12:18pm
What an incredible life. He lived life to the fullest. The life he had was the American success story that you just love to hear. I am sure he will be missed a true champion both on the water and off.

He was a honest man with a pure heart. He always gave me a cordial and sincere advice. His family in SLOVAKIA will always missed him. He visited us /his family / in Slovakia only a few times, but our house was always full of joy and laughter when Mira was here. What a shame to lose him. R.I.P.my friend, my uncle.

A true mans man and a remarkable human being. He always treated everyone with caring and kindness.

I am so proud that I got hte chance to see him pull away from the docks at Seafair under the Sun and take the Miss Wahoo out one last time. It seemed like two old friends were reunited that day as Mira fired the boat like he had so many times in the past and patted the deck of the Miss Wahoo as he pulled away as if to say thank you old friend now lets go give them a show.

Wow... What a remarkable life

A very sad day when someone like Mira passes.