Chip Hanauer was rounding the first turn in the third heat of the Budweiser Las Vegas Silver Cup on wind-chopped Lake Mead at 120-plus mph when he felt his 6,000-pound, jet turbine-powered Miss Circus Circus boat flip sideways and into the air. A four-time national hydroplane driving champion, the 36-year-old Hanauer would either land upright and survive Sunday's final stop on the 11-race unlimited hydro circuit or flip over backward and, in all likelihood, die. 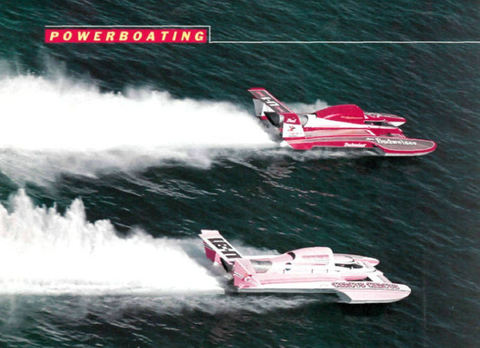 Happily, the bright pink Miss Circus Circus landed right side up. Hanauer, badly shaken inside the enclosed safety-capsule cockpit that became mandatory in this violent sport last year, was able to cross the finish line second behind Tom D'Eath in Miss Budweiser.

"We thought he was over," said Hanauer's crew chief, Dave Villwock. "We didn't hear anything on the radio, just silence. Then suddenly he was calling in specs again. My heart had stopped."

Hanauer blamed the close call on D'Eath, his season-long rival for the individual points championship and one of the drivers who piloted Miss Budweiser to the 1989 team championship. Hanauer and D'Eath had been running even into the turn when D'Eath cut oft Miss Circus Circus, an infraction that resulted in his disqualification and made Hanauer the winner of the heat and thrust him into the lead for both the driving and team titles.

Hanauer said that D'Eath's move had been deliberate, but he hedged on whether he thought his rival's intent was out-and-out malicious. Villwock did not. "Tom was trying to kill Chip," he said. Hanauer's father, Stan, was so enraged by D'Eath's action that he charged into the Miss Budweiser pits after the race and got into a shouting match with D'Eath's wife, Judy. Being in an enclosed cockpit saved Hanauer when the going got rough in the third heat.

"I didn't do anything wrong," said D'Eath. "He turned into me. He pinched me against the buoy—I was on my line. The referee [Mike Noonan] doesn't like me. He disqualified me in Milwaukee [on Aug. 26], and he was wrong here, too. They just gave him the championship. He didn't earn it."

The incident so infuriated Bill Bennett, owner of both Miss Circus Circus and the Las Vegas casino-hotel after which the boat is named, that he buzzed the luxury motor home of Miss Budweiser owner Bernie Little in a golf cart. Bennett fumed for several minutes, but Little never came outside. Eventually Bennett drove off to watch the finals.

Given Vegas's location in the desert, the Silver Cup was held as close as possible to Bennett's hometown, and there was no mistaking that he especially wanted this to be his race. The volunteer officials were all wearing shirts of bright pink, the signature color of Bennett's Circus Circus empire. Pink balloons floated around the Circus Circus hospitality tent, and there was also Bennett's monogrammed pink satin outfit, which resembled nothing so much as lounging pajamas.

Still, public acrimony at the top level of the high-buck, high-risk world of the 2,650-horsepower thunder boats is rare, and it was especially jarring that Little and Bennett were involved in it, because they are pals who dine together often. They also have in common the fact that both of them spend millions on their racing teams. While owners of the other seven or eight boats that usually contest the Unlimited Hydroplane series—among them crafts sponsored by companies making beef jerky, peanut butter and potato chips—spend less than $1 million annually, Little's Miss Budweiser operation has an estimated $3.5 million budget and Bennett's Miss Circus Circus has one that is close to $2 million.

So it was not surprising that Miss Budweiser and Miss Circus Circus had swept the 10 earlier races in the series, each winning five times. But with points based on heat performances as well as on race wins, it looked like the combination of Miss Budweiser and D'Eath had the individual and team championships sewn up after a victory in Tri-Cities, Wash., on July 29, which put them 1,000 points ahead of Miss Circus Circus and Hanauer. "We had a meeting that night and decided it was the time to go after a championship, meet the challenge," said Villwock.

Miss Circus Circus got the break it needed in a race in San Diego a week before the Silver Cup when D'Eath was unable to fire up Miss Budweiser and missed the finals. Hanauer had piloted Miss Circus Circus to victory in the San Diego event and pulled within 173 points of D'Eath and Miss Budweiser in the series. With as many as 1,600 points awaiting the winner in Sunday's Silver Cup showdown, Hanauer and his team had come back to be within striking distance. 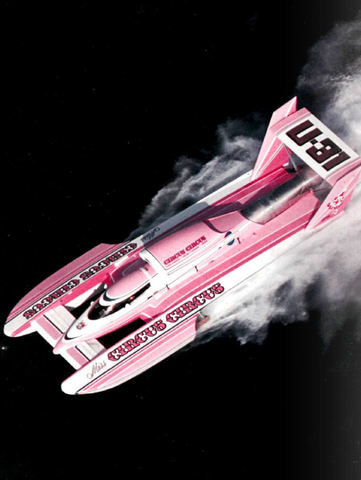 And, by virtue of D'Eath's being D'qued in the third heat on Lake Mead, Hanauer took command. Nevertheless, few of the 70,000 fans on shore decided to head back to the casinos early before the day's final on the two-mile, oval-shaped course. All Hanauer needed to do was finish third or better to take the overall crown, but with accusations hanging heavy in the air, each driver would be racing for pride, not just points.

The final wound up causing still more hard feelings. D'Eath jumped the starting gun, meaning he would be penalized a lap. The championship was decided. Miss Circus Circus won the final, and with it both the Silver Cup and the unlimited series team championship. Hanauer had himself a fifth national driving title. Miss Budweiser and D'Eath finished fifth in the Silver Cup and were runners-up for the team and individual titles.

After Miss Budweiser's streak of four straight unlimited championships was snapped, D'Eath said he thought he had made a clean start in the finals, and added, "It was the wrong town to be in this weekend to win. It's hard to win against Circus Circus when you're in its town."

I consider both of these drivers to be the best in the game . I only hope that they have settled this dispute . They are fierce competitors and if I was the owner of a biat that is the sort of person that I would want driving it