There were actually three Griffon MISS BUDWEISERs. The first appeared in 1979 and the last in 1985. But it is the "Juggernaut" that inspires awe. 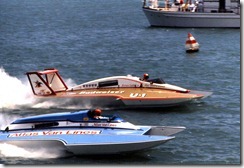 In 1978, Bill Muncey's "Blue Blaster" ATLAS VAN LINES won six out of seven races and raised the world lap speed record from 129 to 132 miles per hour. Clearly, the ATLAS would take a lot of dethroning.

MISS BUDWEISER owner Bernie Little knew he had to do something. And, as usual, he did it in grand style.

Little turned to nonpareil designer Ron Jones, Sr., to build a hull that could run with Muncey.

For power, Bernie decided to use the huge supply of Rolls-Royce Griffon engines that he had purchased in 1971 from Bill Harrah. The Griffon is reputed to have 1000 more horsepower than the Rolls-Royce Merlin, which was the standard engine at the time in the Unlimited Class.

Little also brought back his best driver, Dean Chenoweth, who ended a five-year retirement for the challenge of piloting the futuristic "Beer Wagon." 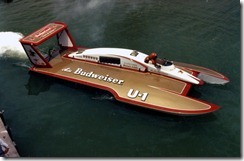 Ron Jones incorporated numerous design innovations into the first Griffon MISS BUDWEISER. According to Ron, "I determined that one of the major advances could be in sponson shapes, afterplane shapes, non-trip shapes, things that contribute to the hydrodynamic cornering of the boat.

"Another thing we did was move the mass weight of the engine off considerably to the left, which we had done to a lesser extent on LINCOLN THRIFT. Everyone said that it was going to go down the straightaway at a 30-degree angle laterally, and that would be a very bad thing. I also got a lot of negative input on the shape of the sponsons, which didn't help my self-confidence any. I nevertheless believed that what I was doing was right."

The Griffon-powered MISS BUDWEISER joined the 1979 tour and by season's end (after some fine-tuning by Jones) was competitive. The Bernie Little team didn't win any total races but scored some impressive heat victories.

Subsequent to the 1979 racing season, MISS BUDWEISER participated in an assault on the mile straightaway record on Seattle's Lake Washington.

While traveling at an estimated 226 miles per hour--well over the existing record of 200.419--the craft apparently struck something in the water, lost its propeller and rudder assembly, and was completely destroyed in the resulting well-publicized crash.

Pilot Chenoweth miraculously survived with only minor injuries. "The engine was really winding up for the first time that anyone had really heard a Rolls-Griffon wind up," Jones recalled. "It sounded like a B-17 with four engines coming by."

Lessons learned on the 1979 hull were incorporated by Ron into its 1980 replacement. "The changes were more subtle this time. We changed the angle of attack slightly. I sharpened the leading edge of the hull body and changed the depth of the air traps aft." With Chenoweth back behind the wheel, the MISS BUDWEISER "Juggernaut" took first-place in its first twenty heats of competition, erasing the former standard of fifteen consecutive heat wins set by Muncey and MISS CENTURY 21 in 1962.

During a qualification run at Seattle, MISS BUDWEISER had its brilliant season cut short when the rudder came off. This caused the hull to swap ends and shear off a sponson.

The team managed nevertheless to hang onto its National High Point lead by activating a back-up hull that Chenoweth drove at San Diego.

The "Juggernaut" was nothing short of sensational in 1981, capturing another National Championship. Chenoweth won six out of eight races and set a lap record of 140.187. Throughout 1981, the "Blue Blaster's" domination had been effectively halted by the Griffon BUD.

Dean Chenoweth, like Bill Muncey before him (in 1981), was lost in a blow-over accident. During a qualifying run at the 1982 Tri-Cities Columbia Cup, MISS BUDWEISER became airborne and crashed upside down.

Kropfeld proved to be an able successor to Chenoweth. With Jim at the wheel, MISS BUDWEISER won more races than any other team in 1983 and was High Point Champion in 1984. Kropfeld also won two 1985 races with the third Griffon MISS BUDWEISER. By 1985, it was clear that turbine power represented the future of Unlimited racing. The "Juggernaut" was sold to Jerry Kenney, who replaced the Rolls-Royce Griffon with an Allison.

Restored to her former glory by the Hydroplane And Raceboat Museum, the Griffon BUD has definitely earned her retirement.