Sunday on the Potomac. The thought of it seems to travel with a picture of a tranquil glade, a promise of stillness. A place where you can lie back on a blanket and ponder the birth of a nation, try to imagine old Tom Jefferson over there in his study dipping his quill pen. Ah, the Potomac: a river of the gods. Long ago, that is. For the Potomac today is a nastier place, a place where you can be poisoned, perturbed and - this since 1926 - have your meatus acusticus externus and your ductus cochlearis torn apart.

These are parts of the ear, and last Sunday on the banks of the Potomac they were assaulted once more as 53,000 persons audited the 41st annual President's Cup unlimited hydroplane race. In a way it was an unusual race as far as hydroplanes are concerned; nobody got killed. It was even more unusual for other reasons. Bill Muncey, the overwhelming favorite, did not win, and it was perhaps the best and most dramatic race in the history of the sport.

It became that when Bill Sterett Jr., driving a boat called Pride of Pay 'N Pak, tore into a six-lap final-heat thriller with Muncey, who was at the wheel of Atlas Van Lines. They had come out of the preliminary heats dead even, and as they roostertailed upstream and down, sometimes side by side, one wondered how Cal Coolidge, for whom the cup was named, could have taken a fancy to the sport. The Silent One abhorred noise, even the sound of his own voice. It was a stubborn riddle that would not dissolve as Muncey and Sterett turned loose their enormous, bellowing hogs on the rain-swollen river. 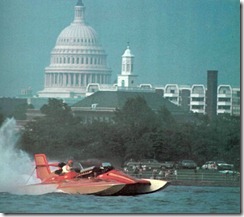 Winner Bill Sterett Jr. bounces a few decibels off the Capital on the way to victory.

Nobody had given Sterett much of a chance. He was a substitute driver who had never won a race. He replaced Bill Schumacher, the ace who had quit a few days earlier, deriding the boat and damning the river as a harbor of debris. Like, say, a refrigerator that once floated down to a point smack in the middle of the course. "Call it the river you can walk across," said Schumacher. There was also one other hard fact not in the substitute's favor: Bill Muncey and the thunder under him.

No matter how you cut it, no matter how repellent his ego is to some, Muncey is hydroplane racing, this year more than ever. No one had been able to come close to him this season, even though he and the Atlas had suffered a disappointing campaign last year. "We just couldn't seem to come up with the right combination of equipment for him then," said one of his aides, dwelling on things like proper spark plugs, gearboxes, propeller sizes. "It's all machinery," he said. "That's what this sport is about. Add Muncey to the right machinery, and you're almost unbeatable."

Going into this President's Cup - second in hydroplane prestige only to the Gold Cup - Muncey was after his fifth straight victory and his sixth on the Potomac. He is the last of the big name drivers, so many of whom have been killed off - three in a President's Cup race one grisly year.

None of this seems to bother Muncey, but his career does not enthrall his wife. "He can quit anytime," she says. "I'm ready, that's for sure." Says Muncey: "I guess I stay on because it's an ego trip for me now. I need it. The money surely isn't worth the risk, and there must be a hundred easier ways to gain fame."

The wave you cannot avoid, the sudden mechanical failure that can blow you to the sky, the memories of friends ripped apart internally and not a scratch on them - all of this moves through his mind. "I have a low pain level, a low fear level," he says. Twice he has been blown out of a boat, "but I can't even tell you what it felt like." No longer young - he's 43 - and never a thrill freak or a roughneck on the course, Muncey drives mostly with his head now as he gets on toward the 20th year of a dazzling career.

So it figured that with the Atlas under him - plus his complete grasp of what he does - Muncey could play the flute or clarinet in the cockpit (he has sat in with the Gene Krupa band and the Seattle Symphony) and still obliterate the kid Sterett, leave him so far back that he would have his hands full just trying to fight the massive wash from the Atlas. Anyway, that was the talk among the more informed on the Potomac banks as the afternoon wore away, helped along by Guy Lombardo - good old Guy, once a hydroplane owner himself, climbing up on the bandstand and directing his way through, yeah, you guessed it, Auld Lang Syne. Moved, the announcer then delivered a verse about a grocer: "My, how his business prospered / Folks were always in his store / For he'd give an honest measure / Then he'd add just a little bit more."

The message of the verse was as elusive as the lead in the final heat for the cup. Sterett and Muncey went into it with 800 points apiece. They battled on each other's hip for the first three laps, with neither boat gaining a substantial advantage. Then Sterett seemed to fall behind for a lap. But he quickly moved back up alongside Muncey on the fifth lap, and they stayed that way until the first turn on the sixth, when Sterett drew ahead. Then Muncey and the Atlas ran into traffic in the form of a boat named Pizza Pete. Sterett seized the moment and gunned into the lead to stay, flashing across the finish line just 3.5 seconds ahead. Sterett's fastest heat of 109.090 mph came near the 1962 record of 109.157 clocked by Muncey. The entire race, and especially the finish, left the crowd buzzing and hydroplane officials ecstatic.

"It's the best race I've ever seen in 25 years of watching," said O.H. Frisbie, president of the company that sponsors the Muncey team.

"Hey, boys," an official shouted to the press. "Great balls of fire! You'll never overwrite this one."

The officials had a right to be jubilant. A race such as this gives them something to talk about, like back in the grand old days when the only time you ever saw a hydro was in the newsreels, and there were good old Guy and Horace Dodge, with ascots around their necks, waving jauntily to the cameras.

Why, maybe even Calvin Coolidge, too.