First, there’s the 1710 number, which is part of its official name the V-1710 engine which actually is the number of cubic inches it displaces. The 12 is the number of cylinders, while the 1600 specifies the horsepower it produces.

Those specs might seem a bit hefty when you think of motorsports vehicles as being light and fast. This applies to some of the motorsports efforts where it participated. But others required the power and torque the engine provided.

The Allison engines were used just about every imaginable way. First, they were used as a single engine, then combined as a pair of them, and even three or four of them-all on a single vehicle. Since their development and release in aircraft in 1930, engine builders following WWII began to pry more power out of them and the rest is history.

This article will tell the motorsports story, both on land and sea. 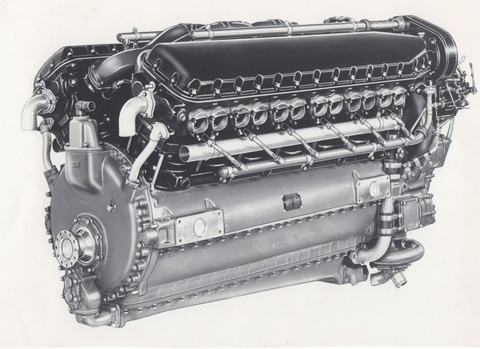 This is an early 1930s factory drawing of the Allison.

Of course, the Allison was initially built for an entirely different purpose than powering vehicles. The Allison Division of General Motors began developing this particular engine for use in fighter aircraft.

In all, there were more than 70,000 produced covering all the different versions.

As the technology evolved, so did the performance. One version eliminated the blower in favor of a pair of carburetors.

The E and F versions were the most-used with over 66,000 produced and used on a number of fighter aircraft. The F version was fitted with a turbo-charger, which raised the horsepower to 2,300 at only 3,000 RPM.

However, the ultimate configuration was the G-series, which incorporated a number of improvements resulting in 1,725 hp at 3,400 RPM.

To achieve that performance, there was a great improvement in supercharger technology.

But as time marched on, the Allisons gave way to the jet age and eventually were designated as surplus in the 1950s. The asking price for the powerhouse was but a small fraction of the cost to produce.

The most numerous was the G Models, of which 763 were produced. And over the following decades, they would find themselves modified and upgraded by engine builders. They would be used in dragsters, desert racers, unlimited hydroplanes, tractor pullers, and Reno Air Race vehicles.

This article will be divided into two sections. The first will address its use in Unlimited Hydroplanes while the second section of the article (in the next issue of Engine Builder) will address the land applications of the giant engine examining its use in drag racing, land speed racing, and national tractor pulling.

Using an Allison on a 24-foot Unlimited Hydroplane back in the 1940s brought forth some interesting challenges to the mechanics. First, the engine had to be inserted into the boat backwards. The supercharger was turned upside down so that the carburetor sat atop the engine instead of the bottom. Shown is the bank installation on a turbo fuel-injection version of an Allison engine.

It should be noted that during the Great War, there were also some other aircraft engine models tested in the big boats.

The Gale VII Unlimited used a V-16 Packard engine, but it was left in the dust, i.e., water spray.

Another engine builder tried a Daimler-Benz Me-109 German fighter engine, but it didn’t work out either. When all was said and done, the Allison G model was the most used.

Builders liked the Allison for this motorsports mission because of the high-revving capabilities of its crankshaft. It was also reported that some unlimited engine builders modified the engines to deliver as much as 4,000 RPM.

Engine placement was another consideration for the Allison/hydroplane configuration. One idea had a single Allison with a duo of counter-rotating propellers with only one gearbox. Another builder took it one step further with two Allisons resting side-by-side and using the twin-prop set-up.

An even more difficult arrangement had the engines one behind the other, which generated some problems. There were several boats with the set-up with the total weight being about 10,000 pounds. One advantage of the configuration was the better stability on east coast rough-water river courses.

The Allison in the hydroplane application experienced considerably more stress than what it experienced in its fighter air situation. The engine revs were higher, and there was the danger of the prop jumping out of the water at high speed possibly causing the engine to over-rev when the prop was unloaded.

In the water application, the engines often needed rebuilding after only a couple hours or less, where in the aircraft use they could run for hundreds of hours before a rebuild. Changes to the fuel tanks were required to keep the fuel flowing when going through a turn at high speed.

Fuel additives were also a part of the engine performance. Alcohol was often used, and even nitrous oxide on occasion for short bursts.

Some of the earlier Allisons following WWII were quickly modified and taken into action. The first Allison-powered unlimited was the Miss Golden Gate III. She set a World Competition speed record in 1946 of 77.9 mph during the prestigious Gold Cup.

The engine continued to improve with the Allison-powered Miss Pepsi V, which earned a pair of unlimited titles along with winning the Gold Cup race.

The famous Slo-Mo-Shun IV really showed the results of fine-tuning by engine builders when it set a straightaway speed record of 160+ mph. A couple years later, the same boat set another record 18 mph faster, and then topped it off with a one-way run of more than 185 mph.

Some of the performance probably came from its new prop-rider design where the only thing in the water is the prop.

The Miss US-1 with Allison power, showed a great mile straightaway run in 1962 of over 200 mph, the first piston-powered boat to exceed that standard. In 1976, she was the last to win the Gold Cup race.

Today, the turbines still rule the Unlimiteds, but with the present turbine rules, there is still one Allison-powered Unlimited, and it has actually won some races against the turbine machines. Big power on tap with the turbo-charged injected Allison.

Ron Snyder was a frequent user of Allison power as the driver of the Miss Madison and Miss Budweiser among other boats. He explained, “In the early 1970s, we used the early carbureted versions. There were also early turbo versions, but the turbos were too small and not very reliable. We replaced the stock turbos with bigger ones which pushed the redline from 3200 to about 4000 RPM. That extra boost related directly to greater performance. But we were able to get three times the RPM through the gearbox.

“Racing on rough water was tough on the old Allisons. When it came out of the water the pistons really suffered and many times were burned. Also, when the prop was out of the water, the engine had a tendency to over-rev.”

Ron had Allisons in two types of hydroplanes, the older versions where the driver sat behind the engine. “It was really noisy and there were times when engine parts came off. There were also times when I was covered with oil,” he recalled. With the cab-over design (driver sitting in front of the engine), “It was a lot quieter and you could see a lot better.”