The three-point hull design of racing hydroplane caught on in a big way in the years just prior to World War II. Most of the early three-pointers were products of the Ventnor Boat Works of Ventnor, New Jersey. These were boats that rode on the tips of the two sponsons and a submerged propeller.

Arena decided to embrace the three-point concept with a design of his own in the form of a new MISS GOLDEN GATE, which measured 20 feet by 7-1/2 feet, powered by an 8-cylinder Wright/Hisso engine. The craft, which resembled the Ventnor hulls, was co-designed by riding mechanic Danny Foster and built by E.A. McLean.

At the 1938 APBA Gold Cup in Detroit, the MISS GOLDEN GATE team was long on talent but short on cash. Still, they managed to survive the 90 miles and to finish second overall to the Italian Count Theo Rossi and ALAGI. In claiming the runner-up spot, MISS GOLDEN GATE posted the highest finish ever, up to that time, by a Western boat in the Gold Cup series. (CALIFORNIAN had finished third in 1931.)

Based upon their performance at Detroit, it was obvious that much would be heard from Arena and Foster in the years to come.

And the story of their finish in the Final Heat would become a racing legend. That was when, for the last 24 miles, Foster had to hang precariously out of the MISS GOLDEN GATE cockpit into the engine compartment, holding the gas controls open with his hands after the fittings connecting the foot throttle with the carburetors went adrift.

For 1939, Arena received an offer of employment from millionaire owner Herb Mendelson to take over operation of the NOTRE DAME racing team.

Mendelson had won the 1937 Gold Cup with Clell Perry as driver. Perry had built a new NOTRE DAME hull in 1938 but had crashed the boat and suffered severe injuries.

Arena rebuilt the damaged hull for Mendelson and drove it to a third-place finish in the 1939 Gold Cup behind Guy Simmons in MY SIN and Harold Wilson in MISS CANADA III. But Mendelson was dissatisfied with the hull and ordered a new boat to be designed and built by Arena for 1940.

Dan would have preferred a three-point design, as MISS GOLDEN GATE had been, but Mendelson insisted on another step configuration. 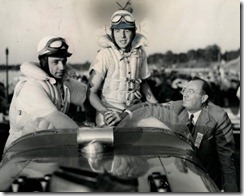 Despite not being able to finish at the Gold Cup, Arena steered the new NOTRE DAME to victory in the President's Cup at Washington, D.C., and set a supercharged Gold Cup Class mile straightaway record of 100.987. The record stood for six years.

Arena also participated in the 1940 National Sweepstakes Regatta at Red Bank, New Jersey, where NOTRE DAME recorded a 2-1/2 mile competition lap of 76 mile per hour. This translated to approximately 81 miles per hour on a standard 3-mile course. This achievement was not exceeded until 1948.
With the advent of World War II and gasoline rationing, APBA boat racing was suspended for the duration. The NOTRE DAME team did not re-appear until 1947.

After the war, Dan Arena is credited with designing and building the first boat to be built with an Allison engine in mind--the MISS GOLDEN GATE III, later renamed MISS GREAT LAKES, the first boat to win a race with a modern power source.

At 26 feet in length, MISS GOLDEN GATE III is considered rather short by today's standards. But in 1946, she was the biggest boat out there at a time when most Gold Cup contenders measured closer to 20 feet.

As it turned out, the craft wasn't large enough to handle that much horsepower. Consequently, she was a wild rider. As a testbed for the new-fangled Allison, she served her purpose well. Following and as a result of MISS GOLDEN GATE III, the accepted configuration for post-war piston-powered Unlimiteds has been more in the 28 to 30-foot range.

The "III" made its first competitive appearance at the 1946 Gold Cup on the Detroit River. Arena was hoping to improve upon his second-place performance in the 1938 Gold Cup with the previous MISS GOLDEN GATE. The 1946 renewal was the first major Unlimited race after the war.

The sport was trying to re-organize and recruit, from the remains of the pre-war fleet, a representative field of entries. Prior to 1941, the Unlimited Class had been known as the Gold Cup Class with a maximum of 732 cubic inches of piston displacement.

The modern era of Unlimited hydroplane racing began when the huge supply of converted aircraft and other types of power sources developed for the war effort became available in quantity.

Arena used a substantially stock 1710-cubic inch Allison, salvaged from a P-38 fighter plane. The engine was installed aircraft-style in the boat, as opposed to the present day practice of reversing the engine for use in a hydroplane.

In the years to come, "the good old Allison" would become to Unlimited racing what the Offenhauser is to Indianapolis.

Interestingly enough, the Rolls-Royce Merlin engine made its debut at the same time as the Allison. Also in the pits at Detroit in 1946 was the MISS WINDSOR, a step hydroplane that never could seem to answer the starter's gun but served to introduce "the mighty Merlin" to the racing world.

MISS GOLDEN GATE III arrived in the Motor City virtually untested. With Dan Arena at the wheel and brother Gene Arena along side as riding mechanic, the yellow-painted three-pointer ran conservatively in the first two 30-mile heats.

Going into the final round, the Arena team had 600 points for two second-place finishes. This compared to 800 points for the favored TEMPO VI and driver Guy Lombardo, who had the fastest lap of the day at 73.294 around the 3-mile course. (This compared to the previous high of 72.707 set by ALAGI in 1938.)

For the Third Heat, Dan and Gene decided to go for broke and see what the Allison engine could really do.

As the Arenas lengthened their lead on that historic September 2, reaching straightaway speeds of 100 miles per hour, they noticed something strange about their wild-riding juggernaut. It was trying to prop-ride!

Unlike the classic tail-dragging Ventnor three-pointers of the 1930s with propellers that were completely submerged, MISS GOLDEN GATE III was trying to ride much higher up on the three points with the propeller only partly submerged.

According to Dan Arena, the boat would only do this sporadically, but the tendency was definitely there. It was a concept that would reach fruition four years later with the Ted Jones-designed SLO-MO-SHUN IV.

After nine of ten laps, MISS GOLDEN GATE III was two miles ahead of TEMPO VI. The craft, which had only had about twenty minutes of water testing prior to race day, was in a class by itself.

Old-timers of Detroit River racing could not help but compare the raw competitiveness of MISS GOLDEN GATE III to that of Gar Wood?s MISS AMERICA VII, a legendary craft that was a brand new boat in 1928 and won the Harmsworth Trophy in record time with the varnish still wet--a contender right out of the box.

Unfortunately, the GOLDEN GATE?s oil pressure gauge was not working properly. The engine was completely dry of oil. With three quarters of a lap to the checkered flag, the Allison blew a rod. MISS GOLDEN GATE III slid to a halt. Guy Lombardo inherited the lead and claimed the victory.

Dan Arena speculated that his boat ran the entire Third Heat and half of the Second Heat without any lubrication. This is an eloquent testimonial to the durability of the Allison V-12, which is reputed to be the strongest engine ever built.

And while TEMPO VI had won the Gold Cup, there was no doubt as to which boat was the new star of the racing world. MISS GOLDEN GATE III--the first Thunderboat--had made its mark.

Dan Arena would like to have fine-tuned the GOLDEN GATE in future races but had commitments back in Oakland, California. He received an offer from Detroiter Albin Fallon and sold the brightest star on the Unlimited horizon.

Dan thus returned to California without the boat but rich with the satisfaction that he had proved his point about the Allison engine. Together with the Rolls-Royce Merlin, the Allison would reign as the premier Unlimited power source until the Turbine Revolution of 1984.

As for MISS GOLDEN GATE III, she went on to win the 1946 President's Cup and the 1948 Gold Cup as MISS GREAT LAKES with Danny Foster driving.

Arena had made an important contribution to what was then known about the three-point design of hydroplane. Unlike the Ventnor three-pointers, Arena's boat sported a flatter profile and trapped more air between the sponsons, allowing for less wetted surface area.

For 1947, Arena returned to the driver's seat of the re-activated NOTRE DAME. By then, the Gold Cup Class had changed over to the Unlimited Class. The Allison V-12 was the new engine of choice. But Mendelson elected to stay with his tried and proven Duesenberg W-24.

At the 1947 Gold Cup on Jamaica Bay, New York, NOTRE DAME posted the fastest heat (56.842) and the fastest lap (62.645), but experienced mechanical difficulty and didn't finish the race.

Three weeks later, NOTRE DAME won the Silver Cup at Detroit, which consisted of two heats of 45 miles each on a 4-1/2-mile course. With brother Gene as riding mechanic, Dan Arena ran head-to-head with Harold Wilson in MISS CANADA III and beat Wilson over the finish line in Heat One, 73.685 miles per hour to 73.505.

Dan's final appearance with NOTRE DAME occurred at the 1947 President's Cup. NOTRE DAME finished second but was beaten in all three heats by Danny Foster in MISS PEPS V, an Allison-powered three-pointer. The handwriting was clearly on the wall. NOTRE DAME was obsolete. Three-point hulls with the large World War II fighter plane engines were the future of the sport.

In 1948, the Arena brothers affiliated with Jack Schafer's SUCH CRUST organization. Dan drove SUCH CRUST I; Gene handled SUCH CRUST II. Dan was the High Point Unlimited driver that first year and won three races: the Webb Trophy, the Gull Lake Regatta, and the President's Cup, which was presented to him by President Harry S. Truman.

Dan won no races in 1949 but drove SUCH CRUST I to third-place in the APBA Gold Cup with a victory in Heat One.

Switching to SUCH CRUST II, Dan captured the inaugural running of the Steel Cup at Pittsburgh, Pennsylvania, in 1950.

For the balance of his career, Arena concentrated less on driving and more on building. With two of his creations (MISS GREAT LAKES II and MISS U.S.), Dan would "give the bride away" by driving the boat in its first race before relinquishing the wheel to someone else.

With MISS GREAT LAKES II, he won both ends of a two-heat match race against Lee Schoenith and GALE II at the 1952 Biscayne Bay Regatta in Miami. Joe Taggart drove the GREAT LAKES for the remainder of the season.

With MISS U.S., Dan drove to a fourth-place finish in the 1953 Gold Cup at Seattle as a favor to owner/driver George Simon who wasn't yet qualified to drive in a Gold Cup race.

The Arena design in Unlimited racing reached its zenith on April 17, 1962, when MISS U.S. I raised the mile straightaway standard to 200.419 miles per hour at Guntersville, Alabama, with Roy Duby driving, a world record that stood for thirty-eight years.

MISS U.S. I, built by Les Staudacher, was a line-for-line hull duplicate of the MISS U.S. that Dan had designed and built in 1953.

Dan Arena's "Last Hurrah" in boat racing occurred in 1994 when he and brother Gene were inducted together into the Unlimited Hydroplane Hall of Fame.