Known primarily for his championship exploits with Bernie Little's MISS BUDWEISER team, Chenoweth won 25 Unlimited races. He captured the Crown Jewel of APBA competition, the Gold Cup, four times in 1970, 1973, 1980, and 1981. Dean also won four National High Point Championships and, in 1980, set a world lap speed record of 138.249 miles per hour on the Columbia River at the Tri-Cities, Washington. The Xenia, Ohio, native began his racing career in outboards in 1951 and was a three-time National Champion in the "clamp-on" category with more than 70 race victories. Moving up to the Limited ranks, Chenoweth won the 145 Cubic Inch Class Inboard Nationals in 1965 with CHUCK'S JOY and was 7-Litre Class High Point Champion in 1968 with SAYONARA II.

Dean's first Unlimited Class ride was with Joe and Lee Schoenith's "bat-wing" SMIRNOFF. Designed by Dick Brantsner and "Wild Bill" Cantrell, SMIRNOFF was built at a time when "heavier was better" in terms of safety philosophy. An earlier SMIRNOFF hydroplane had crashed in 1966 and the driver (Chuck Thompson) was fatally injured. The 1968 hull weighed 8000 pounds, at a time when most Unlimiteds weighed around 6000 pounds.

The 1968 SMIRNOFF was the first Unlimited to be built with a "picklefork" or "forklift" design. By cutting back on the forward tip of the bow, it was believed that the boat would be less likely to "stuff its nose" at high speeds. This was a concept that had been tried in outboards in Italy as early as 1950. But this was the first time that the idea had been seriously attempted in the Unlimited Class. SMIRNOFF thus paved the way for the modern "picklefork" configuration used by all of today's Unlimiteds. 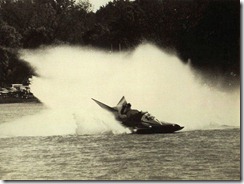 Dean does a headstand in Smirnoff at Detroit, 1968. Photo by Fred Alter.

The new SMIRNOFF was pronounced "kill-proof and spill-proof" when she first appeared on the Unlimited scene. But could such a heavy boat be competitive with the likes of MISS BARDAHL, MISS BUDWEISER, MISS EAGLE ELECTRIC, MY GYPSY, and the other top boats of her day? The answer to that question was a resounding "No," at least during the first few months of the season. Despite the efforts of driver Chenoweth and crew chief Jim Lucero, the SMIRNOFF could finish no higher than sixth at any of the first seven races of 1968.

Some of the excess weight was trimmed out and the boat's performance started to improve at season's end. Dean drove her to third-place in the Gold Cup at Detroit and fourth at both San Diego and Phoenix.

Despite a last-minute change in sponsors--when Heublein's dropped out and the Arthur B. Myr Sheet Metal Company took its place--the team had a stellar 1969 season.

In only his second year as an Unlimited pilot, Chenoweth was driving like a seasoned veteran. And new crew chief Jim Kerth really had the Rolls-Royce Merlin engines humming.

The renamed MYR'S SPECIAL took first-place in the Indiana Governor's Cup at Madison and the Atomic Cup at the Tri-Cities for a team that hadn't won a race since 1964. 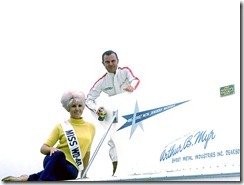 When the National High Points were added up at the end of the year, Chenoweth and MYR'S SPECIAL fell only 600 points short of High Point Champion MISS BUDWEISER and driver Bill Sterett. The MYR finished way ahead of Bill Muncey in MISS U.S., Leif Borgersen in NOTRE DAME, and Jim McCormick in ATLAS VAN LINES.

But Dean wasn't happy. He felt that he could have--and should have--finished first in National Points. When Chenoweth handed in his resignation at the end of 1969, he had not yet been offered the MISS BUDWEISER ride.

As a replacement for the retiring Sterett, Dean faced an awesome challenge. The Bernie Little team had won four races, including the Gold Cup, and the National Championship in 1969. It was Chenoweth's job to do it all over again for one of the most demanding owners in Unlimited history. And that's exactly what he did.

Dean finished first at the Tampa Suncoast Cup, the Indiana Governor's Cup, the Seattle Seafair Regatta, and the San Diego Gold Cup in 1970. He also retained the National Championship for the MISS BUDWEISER team. This was the start of a long and successful association between driver Chenoweth and owner Little that was to last intermittently for twelve years. 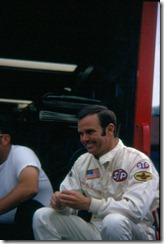 Dean in Madison in 1970. Photo by Hank Kosciuszko

He did take a one-year hiatus from the MISS BUDWEISER team when he transferred to the NOTRE DAME camp for the 1972 season. Owned by Shirley Mendelson McDonald, the NOTRE DAME was a problem boat from Day-One. The riding characteristics were terrible. To Dean's credit, he was able to get more out of it than any of the eight successor drivers of that particular hull. He finished second to Bill Muncey and ATLAS VAN LINES in the 1972 Seattle Seafair Regatta.

Chenoweth had one of his best seasons in 1973. His chief rival was PAY 'n PAK, piloted by Mickey Remund. Dean's boat was three years older and a thousand pounds heavier than PAY 'n PAK, but Chenoweth was nevertheless able to achieve parity with the PAK. This was due to Dean consistently securing the inside lane in heat confrontations between the two boats.

Beyond doubt, Dean Chenoweth's finest hour as a race driver occurred on a cold, rainy, misty day on Seattle's Lake Washington in 1973. Visibility was terrible but water conditions were ideal. During the first heat of the World Championship, MISS BUDWEISER and PAY 'n PAK shared the same roostertail for five laps on a 3-mile course to become the first boats to average better than 120 miles per hour in a heat of competition.

MISS BUDWEISER did 122.504, while PAY 'n PAK checked in at 120.697. The raw power and the competitive finesse of the two boats--both designed by Ron Jones--were positively awesome. This was what hydroplane racing was all about.

After 1973, Dean took a forced vacation from competition when he was awarded an Anheuser-Busch beer distributorship in Tallahassee, Florida. This meant no more boat driving for a while.

Chenoweth was permitted to briefly return to the MISS BUDWEISER cockpit in late-season 1974 when driver Howie Benns suffered a broken leg in a motorcycle accident. Dean won the season-concluding Admiral's Cup at Jacksonville, Florida.

Despite being retired from the sport between 1974 and 1979, Chenoweth proved himself to be as competitive as ever in his later years.
Dean established a record of 20 consecutive heat victories at the first five races of 1980, driving the famed Rolls-Royce Griffon-powered MISS BUDWEISER.

Even in the last year of his life, Dean was nothing short of sensational. At season's end in 1981, Chenoweth had won six of eight races, including the Gold Cup in Seattle and the World Cup in Acapulco, Mexico.

Between 1980 and 1982, Chenoweth won more races than any other Unlimited driver and was Gold Cup and High Points Champion in 1980 and 1981. Dean was leading in National Points when he suffered fatal injuries in a "blow-over" accident at the Tri-Cities in 1982. 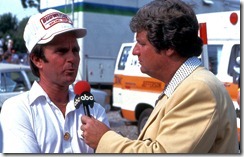 Dean with Jim Hendrick in 1982. Photo by Sandy Ross.

While trying for a qualifying record, MISS BUDWEISER became airborne and crashed upside down.

The balance of the boat had been changed for the Tri-Cities race. On the lap before the crash, MISS BUDWEISER got unusually light and was tip-toeing along much higher than usual. Still, the boat's attitude was quite stable and gave no indication of what was to come.

Following and as a result of Dean's death, research and development began which resulted in the introduction of the F-16 safety canopy in the Unlimited Class by designer Ron Jones, Sr., in 1986.

Chenoweth was a very private person. Unlike so many people in the sport, he didn't draw attention to himself. Dean's record spoke for him. And his record is impressive indeed.

Throughout his career, Chenoweth was overshadowed by team owners who were very flamboyant.

In a boat camp, there can be only one "star." Personality-wise, Dean could not have been more opposite than Mr. Schoenith and Mr. Little. Lee and Bernie were very outgoing and extroverted, while Dean was very quiet and concentrated on the job at hand. 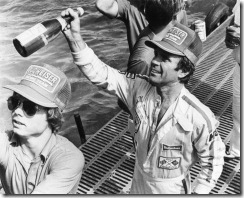 The same applied to a lot of the drivers that Chenoweth drove against. The driver who was clearly Dean's equal out on the race course was Bill Muncey. Dean and Bill were the top drivers of their day. But Dean couldn't hold a candle to Bill when it came to feeding the publicity machine. No one could field the reporters' questions at a press conference the way Muncey could. It's not surprising that the media tended to prefer Bill rather than Dean.

A generation of race fans has now grown up that never saw Dean Chenoweth race. They don't know what they're missing.