The universal appeal of these "thunderboats" is a product of roaring sound, flashing color, and the hovering dangers of high speed. Powerful motors generating close to 2500 horsepower hurtle the giant hydroplanes around 2 1/2 mile ovals at average speeds of 125 mph, in some of boat racing?s roughest water. Straightaway speeds reach 160 and the record for the measured mile stands at 200.419 mph!

Today's typical unlimited hydro is about 30 feet long, has a 13 foot beam and weights nearly 3 1/2 tons. It uses a 12-cylinder aircraft engine for power, either an Allison or a Rolls Royce. These supercharged engines run on various blends of aviation gasoline and methanol. Turning at 4200 rpm (nearly twice their design speed), these brute engines are geared to spin tiny, 13 inch diameter propellers at 13,000 rpm. The supercharger rotors turn at 35,000 rpm, faster than the speed of sound! To withstand this terrible torque, prop shafts are of high tensile steel, 1 3/4 inches in diameter. 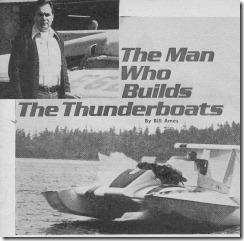 From the drawing table to the trailer, an Unlimited requires about 2000 man hours of highly skilled labor. The classic construction uses hardwood stringers (Jones prefers white oak or Northern Appalachian ash). The gussets, or bulkheads, are of African mahogany plywood. The "skin" is of the same material, with 6061 T-6 aluminum bonded to the entire bottom.

The aluminum epidermis of an Unlimited is vital to its survival. At 160 mph, water becomes concrete-hard and can actually pick the soft grain right out of the plywood, de-laminating it. As Jones observes: "Peeling the bottom off at that speed can ruin your entire afternoon."

Last year, Ron Jones scored another construction coup with Pride of Pay 'N Pak, the first Unlimited hydroplane to be build entirely of honeycomb aluminum. Thus material consists of two thin sheets of aluminum, bonded to an aluminum honeycomb core. The cellular construction has tremendous strength and represents an important weight saving. The 1973 Pay 'N Pak weighted in at 6,250 pounds, lighter than the previous version by fully 850 pounds. 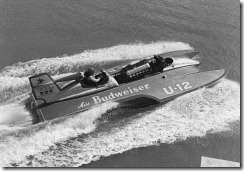 This is your typical Ron Jones "pickle fork" hydroplane. Your typical price tag is $42,000, less engine. Typical costs for a season (including spare engines, trailer, service van, and crew) can bring total to $225,000!

Although Ron's expertise is clearly established, he must still endure the bane of custom boat builders - an owner's bright ideas. Racers are notorious experimenters, but sometimes have strange theories on what will improve a boat's performance. Often, their efforts to discover a winning boat's speed secrets become laughable.

Some years ago, Bill Muncey (one of today's most successful Unlimited drivers) was campaigning a Jones 266 cubic inch hydroplane. A top seeded driver even then, he won 42 straight events, an incredible performance. As might be expected, curious competitors inspected his boat closely at every opportunity. On the vertical rear ends (transoms) of the two sponsons, they found something not on their boats, two small inverted grooves. Some of them approached Ron Jones, demanding to know the purpose of the grooves, and why their Jones 266 hydro did not have them.

As puzzled as they were, Ron checked with Muncey and got the answer. Bill's trailer tires, which has no fenders, has come into contact with the sponson transoms and worn the grooves in route to the race site. Most of the owners accepted the explanation, but a few remained convinced that Bill Muncey's boat had some secret advantage over theirs. 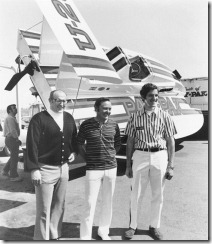 The needs of a high speed hydroplane combine to create a designer's nightmare. Hull shape and size is controlled by the motor to be used. Weight and placement of the motor help to achieve the proper center of gravity and center of balance, but are limited by the drive system to be used. Since hydroplanes are affected by aerodynamic forces as well as hydrodynamic forces, every boat is, in Jones' words, "a designer's compromise."

As an aerodynamic vehicle, a hydroplane demands perfect balance. Ideally proportioned, it would "fly" in such a way that, passing over an imaginary scale, it would produce a zero reading. It must accomplish this "flying" both upwind and downwind.

For years the greatest worry of hydroplane drivers has been the danger of "kiting." When air pressure under the bow becomes too great, the high speed boats can blow over backwards with sudden and disastrous results. Jones' creative and much-copied solution to this problem is the now famous "pickle fork" bow. By moving the center, airfoil section of his boats a few feet aft and allowing the sponsons to protrude, he effectively moved the center of lift aft, too. This feature has proved so successful, it now appears on virtually every type of air-riding hull, including catamarans and tunnel boats. Every Jones design includes a pick forked bow, which as become as synonymous to Jones' boats as fins to the Cadillac. Radical U-95 uses two Lycoming T-53 turbine engines rated at 1700 hp each! This is the first boat to use a controllable stabilizer wing

The problem with maintaining the proper "flying" attitude on an Unlimited has been inhibited for years by an APBA regulation. This rule allowed airfoil surfaces which could be adjusted, but not from the cockpit. In other words, not while underway. A 1974 ruling has amended that rule to permit controllable airfoils.

On the radical, turbine driven U-95 which will debut this year, Ron provided a controllable horizontal stabilizer. Created by aerodynamicist Jim Larson, the bearing-mounted airfoil pivots at the 1/4 chord (25 percent of the width of the wing). Using a rocker switch mounted on the steering wheel, the driver can adjust the stabilizer through a 16 degree range while the boat is in motion. Pre-season testing has shown it to be workable, and beneficial in varying wind conditions.

"I guess I shouldn't, but I worry about it until I'm sick. Last year, in Seattle, I watched Mickey Remund in Pay 'N Pak and Dean Chenoweth in Miss Budweiser run 15 side by side. They averaged 123 mph for six laps, not more than three feet apart. I was speechless and petrified. That had to be the most thrilling thing I have ever seen in my life. Both boats were mine, so I guess you know how I felt."

"Good reading - Thanks, for sharing."