Some people think the new Miss Bardahl is too far out, too extreme. I disagree. In its first trials on Lake Washington early this year the boat felt smooth and sure. Since then I've been working in up to faster and faster speeds. 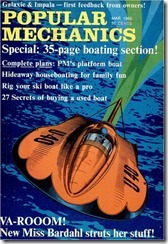 This is a sport that's full of contradictions. The unlimiteds are the elite of racing, yet it's a brutal, punishing sport that's hard on the drivers and even harder on the boats. Last year the existing Miss Bardahl won $47,875 in prize money, yet we spent close to twice that amount to win the purses. For a power-plant we use a sturdy, reliable Rolls Royce engine that weights a full ton, yet we run it so close to the ragged edge that we usually change engines after two heats, say about every 30 miles of competition. An unlimited charges down the straight-away at upwards of 170 mph, compared to the top speeds at Indianapolis, and yet we average no more than 110-115 mph around an oval three-mile course.

That last sentence spells out the reason for the new boat. The old Miss Bardahl won the Gold Cup and the national championship for the last three years on a row, yet like all other conventional unlimiteds her speed drops to around 90 mph in a turn. We want a boat that could go through a turn at 100 mph or more.

To get it, Ole Bardahl commissioned Ron Jones to design the world's fastest unlimited hydroplane. Ron is the son of the brilliant Ted Jones who designed the famous Slo-mo-shun unlimiteds, and Ron has taken up where is father left off.

The new hull is designed to go into a turn faster without mushing down and to come out of the turn faster. It's also designed not to "kite" - that is, if the nose rises up, the tail should rise too. Otherwise the boat could flip over on its back or begin a porpoising motion that could end in a nose-first dive that would shatter it into matchsticks. (Driving technique comes into this, too. If I back off the throttle too fast, the tail could dig in and the nose rise. We'd be airborne.)

To obtain this paragon (and we don't know that we have it yet) Ron Jones blended a great deal of hydrodynamic and aerodynamic design into a boat that is 32 feet long and weighs over three tons.

The biggest change that he made was to move the engine aft where it can sit lower in the hull. This allows a lower profile and it also lowers the center of gravity, which all by itself allows faster speeds in the turns. Most of the other changes were made simply to keep the boat fast and stable in spite of the changed engine location.

The deck is curved fore and aft, and from side to side, to create maximum aerodynamic lift. The cowling that houses the cockpit and the engine, similarly, starts at the nose and extends all the way back to the vertical stabilizer, to provide a clean air flow and contribute to lift. The afterplane (the portion of the hull that extends aft of the sponsons) is widened to nine feet to increase the lift.

In most unlimiteds the vertical stabilizer or air fin creates quite a bit of drag. For our new boat, Jim Raisbeck, a Seattle aerodynamicist, made use of a NASA airfoil section to design a stabilizer of minimum drag.

The outboard sponsons of a hydroplane are deeper than the rest of the hull. In effect they create a tunnel, and the air that flows through this tunnel helps lift the hull up out of water. The flat bottom of the new boat is rockered just a bit at about the halfway point to help retain this air under the afterplane.

The engine is placed so far back that for the first time in unlimited racing we are using a V-drive. The engine drives a gear box located just behind the cockpit, and the propeller shaft extends aft from the gear box. The big gears and their housing weigh 350 pounds, and the gear box has its own self-contained oil supply and its own water-cooling system. These are vitally necessary, for the gears have a ratio of 1 to 3, and they turn the propeller shaft at up to 12,600 rpm.

The usual unlimited's propeller shaft is supported under water by a vertical strut attached to the hull and this strut creates a lot of resistance when the boat is sliding through turns. Jones designed a V-strut that is something like a small hydrofoil for the new boat. It gives a small amount of lift to the stern all the way through a turn.

Most unlimited hydroplanes use a propeller that has neutral or negative lift. For the new boat we are trying propellers that have positive lift designed into them, again as a way of compensating for the aft location of the heavy engine.

With all these changes from orthodox design you can understand why a lot of people in the game are shaking their heads and saying "The boat's too radical."

The new hull is built from aircraft-grade maple plywood on oak frames, with a glassed skin. The bottom is clad with aluminum sheet, as thick as one quarter inch on the inner runners of the sponsons.

Aside from the usual instruments the cockpit has a row of lights to warn me if the oil pressure drops or if some part of engine overheats. The lights are a big help since it's hard to study the instruments during competition.

I wear a fireproof suit, a life jacket and a crash helmet, but no safety harness. It's best to be thrown clear if the boat flips or gets into trouble. I use a foot throttle that's hinged at the center instead of at the bottom. This helps anchor my heel while using the toe for control. It's a help in rough water that tends to bounce your foot off the throttle. And it helps me to back off instantly if the boat becomes airborne. Otherwise the engine speed might climb to 5000 rpm, with a subsequent twisting off of the shaft or propeller when the boat hits solid water again. 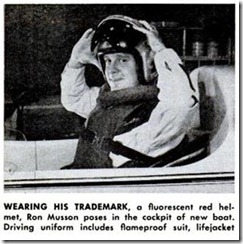 Keeping an unlimited hydro in competition requires a lot of engines, and we have nearly two dozen in storage. All are used, war-surplus 12-cylinder Roll Royce aircraft engines about 20 years old. They are water-cooled and supercharged. Originally they developed 1800 hp at 3000 rpm. After being torn down, re-worked and balanced, and with water injection, they develop about 2850 hp at 4200 rpm.

As a safety precaution we usually use one and a half engines during a race. That is, we change engines at the end of the second heat. Leo Vanden Berg and his four-man crew have made an engine change in as little as 17 minutes. The old engine undergoes partial tear-down and inspection, including Magnafluxing.

Between the first and second heats we lift the boat out of the water and spray fluorescent dye over the propeller, the shaft and some engine parts, then examine the parts under an ultra violet light. This reveals any hairline cracks that might be developing. All these precautions pay off. In the last two and a half years we've run 57 heats of competition without an engine failure. Of course, the (plug!) Bardahl additive that we use in the fuel and oil helped in setting this reliability record.

The unlimited hydros take part in about 10 APBA-sanctioned races per season, from June through October. An average of 15 boats travel the full race circuit; six might be considered the top contenders.

Each race is on a different course, and each course has its own problems for which the boats have to be set up differently. There are different currents, different wave reflections from the beach at each location. At Seattle we race on fresh water at sea level, at San Diego we run on salt water that's light and buoyant. We loose horsepower at Lake Tahoe because of its 7000-foot elevation and the coldness of its water, so we set up the hull differently, use a special propeller and go into the turns harder than usual.

I think the Detroit course is the toughest of all. There's a wide turn at one end, a narrow turn in rough water at the other end. Plus the river current. You could say that the winner at Detroit is usually the boat with the best combination of acceleration and speed that lets it get through the narrow turn faster than its competition. Yet it takes a different combination at Madison, Ind., because of the long straight-aways and the tight turns.

All the hours of preliminary trials that we are putting on the new boat this spring, and all the hours of studying the motion pictures that we make of each run, are only the beginning. We really won't know how well the new Miss Bardahl performs until we try it in the churned-up "competition" waters of a few races. But right now Ole Bardahl, Ron Jones, and my crew and I think we have a real surprise in store for all the other unlimited hydro teams.

Comment by Randall E. Roe on February 2, 2011 at 8:12am
My dad subscribed to Popular Mechanics for years and I remember reading this article and being very excited about the "New" dragon. It got tossed out at some time, a couple years ago I was walking around at a  Car parts swap meet and found an absolutely pristine copy of this magazine the guy was selling it there because it had an article on the new '67 cars in it.

Comment by Mark Bardahl Manchester on January 30, 2011 at 4:39pm
Thanks Dale for reprinting this article. The last paragraph gave me incentive to really dig hard when I was going through the Bardahl archives and searching through the many boxes of film. I had read in this article that film existed of the boat running so I was very hopeful in finding it as I was sleuthing through the archives. I let out a loud "YES" when I found it because I thought for sure it had been long lost or stolen or maybe even taped over.  The newly discovered amateur homemovie is a little less than three minutes long and has been restored to DVD. We will release the film in the next coming months as we are putting together quite a bit of new content and we want to do it right. Thanks again. Mark