One of the sport's winningest, most important boats arrives back in Seattle this week.  Dr, Ken Muscatel purchased the 1973 Pay 'N Pak (Atlas Van Lines, Miss Madison) from the Dave Bartush collection in Detroit. The famous hull make a brief appearance before being moved Ken's Burien shop today. Ken's plans are to restore the boat to its original Pay 'N Pak livery. 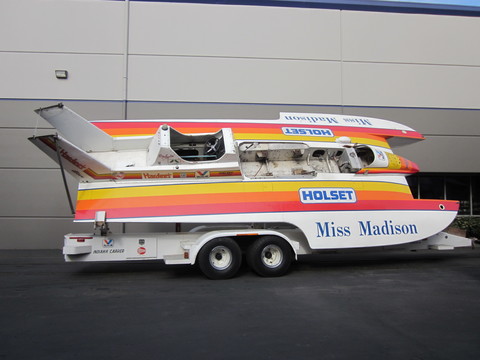 The 1973 Pay 'N Pak, which became Bill Muncey's Atlas Van Lines in 1976, was the first hydroplane of any shape or size to be built of aluminum honeycomb, rather than marine plywood. According to Jones, "I had originally thought that I would use a honeycomb bottom. But after talking with the people from the Hexcel Company, I was very impressed and decided to use it everywhere in the boat that I possibly could for a weight saving of about a thousand pounds."

In planning the new Pak, Jones wanted very much to build a cabover. But Heerensperger insisted on a rear-cockpit hull and won out. Ron nevertheless utilized many of the cabover hull characteristics while still seating the driver behind the engine.

"But I did insist on the use of a horizontal stabilizer. Heerensperger agreed because it would give him a lot of publicity. And it did. Perhaps, by today's standards, the stabilizer was not everything it could have been. It was, however, a good running start on the widespread use of the concept. "And in all fairness to [crew chief] Jim Lucero, he certainly added to the boat's ultimate performance by preparing excellent engines, good gearbox/propeller combinations, and probably some fine-tuning on the sponsons."

Perhaps the most eloquent showcase of the talents of Ron Jones occurred at the 1973 World's Championship Race in Seattle. Despite mist and rain, the competition was superb and unforgettable. The honeycomb Pay 'N Pak and its 1970 predecessor (renamed Miss Budweiser) ran side-by-side. Drivers Mickey Remund and Dean Chenoweth shared the same roostertail en route to becoming the first boats in history to average better than 120 miles per hour in a heat of competition. A local newspaper labeled the Pak and the Bud as "the champion fogcutters of the world."

That 1973 campaign was the first season in which hulls designed by Ron won the majority of Unlimited races (eight out of nine). Pay 'N Pak and Miss Budweiser both had four wins and finished one-two in National High Points. In spite of being three years older and a thousand pounds heavier than Pay 'N Pak , Miss Budweiser was able to achieve parity with the Pak. This was due to driver Chenoweth consistently securing the inside lane in heat confrontations between the two entries.

The 1975 season was another banner year for the Ron Jones hulls. That's when the Billy Schumacher-chauffeured Weisfield's (former Valu-Mart) had the defending National Champion Pay 'N Pak on the ropes in the first three races. But Pay 'N Pak driver George Henley overcame an almost insurmountable point lead by winning five of the last six races of the season to retain the championship.

Never before or since has the momentum of one boat been so surely halted by the performance of another challenger.

A hearty "welcome home" to one of my very most favorite boats.  It's about damned time!