Join us at Lake Chelan on October 5th through 7th!

The 2012 Mahogany & Merlot Vintage Boat Show is a "on-the-water" boat show and FREE Family Friendly event featuring the Vintage Unlimited Hydroplanes from the Hydroplane And Raceboat Museum in Seattle, along with restored Vintage Inboard ‘Limited Class’ Hydroplanes, and Antique & Classic Mahogany Runabouts from the Golden Era of pleasure boating.…

In the early part of August each year an odd kind of euphoria overwhelms the otherwise rational people of Seattle. They start shooting off fireworks. The males put on pirate costumes and wander around town kissing, and…

Question 1: Can a raceboat be made that will not flip?

Question 2: Can that unflippable boat be a consistent winner?

Answer: Yes, but as one pundit said many years ago about another program, “when  the Boeing Board of Directors changes the basic laws of Physics or gives us an…

The Race That Nobody Remembers

The 1971 Madison Regatta will never be forgotten for as long as men race boats. That, of course, was the year when Jim McCormick guided the community-owned MISS MADISON to victory in the race of races--the APBA Gold Cup--before the hometown crowd.

But as memorable as the 1971 regatta was, no one seems to want to remember the race that followed it in 1972.

In lieu of the Gold Cup, the city of Madison hosted a World's…

Bill Muncey, an assured, chunky man of 34, with sandy hair, giant forearms, a handsome, round face and amiable spaces between his upper teeth, looks like what, in fact, he is: a young man on the way up in the grocery business. "The…

In case you were unable to attend Dixon Smith's Racing Development of the Merlin from the 1950's thru the 1990's lecture held at the Hydroplane and Raceboat Museum last Saturday evening, you watch a video recording of the event by visiting our Ustream channel (http://www.ustream.tv/channel/thunderboats), or by just clicking the "UStream" button on the far left side of our web site. 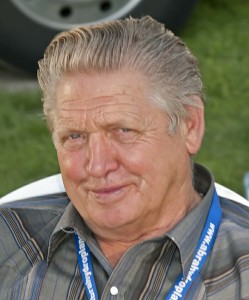 Note, 1956 Seafair Trophy winner and National Champion Russ Schleeh passed away on May 6, 2012. Russ died at home in Mission Viejo, California. He was 93.

Whatever it was, the photograph on the wall in Dan Gurney's office showed it to be a smoking heap of tangled metal on the bed of a desert. "Is that a Flying Wing?" I ventured, and Dan, America's finest…

She won the 1959 Detroit Memorial Regatta and the 1959-60-61 Harmsworth Trophy races. With Bob Hayward driving, the "III" started in ten heats, finished first in eight of them and placed second twice.…

The first boat to show up at a race with a Merlin was the MISS WINDSOR, a home-built (by Lorne Armstrong) step hydroplane that attended the 1946 Gold Cup at Detroit but failed to start. MISS WINDSOR only started in one heat of competition. This was at the 1948 Maple Leaf Trophy in Windsor, Ontario, where it failed to finish.…

The Unlimiteds Hit The Water For The First Time In 2012

The Tri-Cities testing date is now confirmed for this coming Friday, May 18th.

The 88 Degree Men® and the U-11 Peters & May boats are due to start testing sessions at 10 AM on May 18, off the shores of Columbia Park. Drivers Scott Liddycoat and JW Myers will be in the Tri Cities on May 17 doing personal appearances while the boat…

Stan Hanauer tells it best, but since he is Chip's father it's not surprising that he should know the inside story of his son's 1982 Gold Cup victory. It was the first of that record nine, and…

Chip Hanauer was rounding the first turn in the third heat of the Budweiser Las Vegas Silver Cup on wind-chopped Lake Mead at 120-plus mph when he felt his 6,000-pound, jet turbine-powered Miss Circus Circus boat flip sideways and into the air. A four-time national hydroplane driving champion, the 36-year-old Hanauer…

Unlimited hydroplanes, the powerboats that attract hundreds of thousands of fans when they race, have always had two very tidy certainties associated with them. One is that they make a particular sort of ear-splitting noise. Promoters like to refer to it as "thunder," and the vessels themselves as "thunderboats." In fact, the sound is more like what you'd expect a power mower to make while running…

If you were unable to attend the Couch Racing with Chip Hanauer event, or you missed the live broadcast, you can watch the event by clicking on the links below:

If you did attend the event, either in person or in the Internet, thank you for attending and…

When today's Spirit of Detroit Regatta is history the unlimited hydroplane sitting in the winner's circle may well be a product of Norm Berg's Tacoma, Washington boat shop. You see, the 37-year-old Berg is the builder of Bill Muncey's 1978 national champion Atlas Van Lines, winner of the last two Detroit River go-arounds. Norm Berg is also the builder of two other top-flight contenders - Circus…

Life Is A Circus Circus

Bob Steil, former owner of the Squire Shop hydroplanes, has just acquiring the 1979 U-31 Miss Circus Circus from the Dave Bartush collection in Detroit. The hull is a duplicate of the 1979 U-2 Squire Shop, with both being designed by Dave Knowlen and built by Norm Berg. The U-2 demolished in a test run in late-season 1981. Bob Steil then bought the former Miss Circus Circus as a replacement. The "new" U-2 was itself badly damaged at the 1981 UIM World…

One of the sport's winningest, most important boats arrives back in Seattle this week.  Dr, Ken Muscatel purchased the 1973 Pay 'N Pak (Atlas Van Lines, Miss Madison) from the Dave Bartush collection in Detroit. The famous hull make a brief appearance before being moved Ken's Burien shop today. Ken's plans are to restore the boat to its original Pay 'N Pak livery.…

Here are some links to some photos of the Slo-mo-shun IV being moved from the Museum of History and Industry's Montlake location, Tuesday, April 3, 2012 in Seattle.

The Center for Wooden Boats