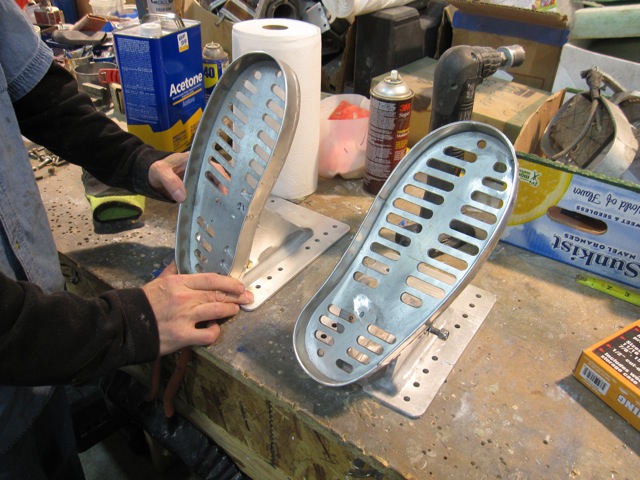 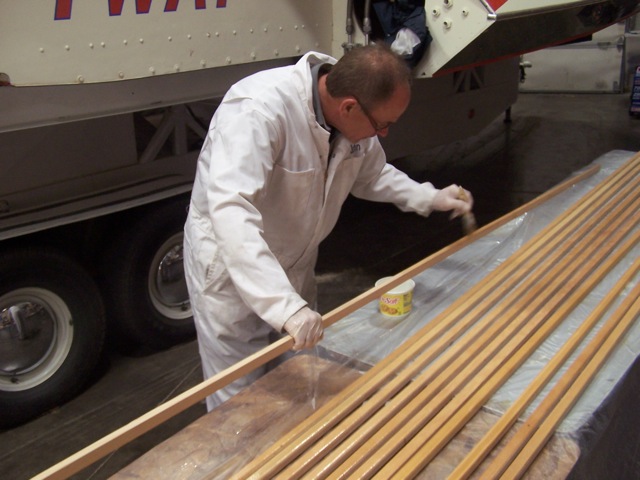 As we begin our third summer with the Blue Blaster project, a lot has been accomplished on the boat the past several months. Most of our attention has been working on systems installation in preparation to add the deck. Along with fitting the deck battens, we’ve finished up the wing supports and the Blaster’s distinctive sponson-to-non-trip deck gussets. We’ve also installed the ADI, fuel and oil tanks and have almost all the pumps and filters mounted. Last week the crew began the big job of making and fitting the numerous hoses. All the compartments are now painted and work continues to finish the cockpit components.

Special thanks to Keith McGowan for doing an outstanding job upholstering the drivers seat. Since we could not locate the original seat, we fabricated a new one out of plywood and fiberglass. Keith took the bare shell to his workshop and in about two weeks returned with the beautiful finished seat. It’s extra roomy to fit different drivers and includes removable seat cushions of various thicknesses. Another addition to the cockpit are the foot petals. As with most of the Blaster’s hardware, the original petals were re-used in the ‘82 Atlas so Rob Wheeler fabricated two new petals for us. Andrew welded up the mounts so both petals are ready to be fitted in the boat.

Now that we have the seat and it’s mount in place along with the steering and foot petals, all that’s left to do is have Chip, David Williams and any other potential driver sit in the boat so we can final fit the components. We made things fairly adjustable so anyone who drives the boat should be comfortable.
It’s interesting when people climb in the cockpit how low they are seated, almost like driving a go-cart. You don’t notice in photos how close to the bottom Bill Muncey sat and how high up his feet were. The Blaster has a very high-lift and shallow bottom under the cockpit.  One can speculate that being in this “seat-of-the-pants” position added to Muncey’s ability to fly the boat so precisely with his only control being the throttle and rudder.

By the end of the summer, we should have the deck on the boat and the front cowl glassed in position. I’m sure we’ll be spending a lot of time sanding and fairing the deck as we add several layers of fiberglass cloth over the 1/4” plywood. We’ll also be able to turn our attention towards the rear cowl and wings.

In my next report I’ll give the details about the engine, instrumentation and driveline progress.
I know the entire restoration crew joins me in a special thanks to everyone who has joined the Blue Blaster Booster Club. And a huge thank you to the amazing Compton Lumber who have supplied every board, sheet and stick of wood for the entire project. Without them we would still be stuck in line at Home Depot with them trying to convince us it could all be done with drywall and 2X4’s.

Above in additional posts are photos by Phil Lampman and Randy Mueller taken the past few weeks.

Two photos from Thursday by Gail Richardson. Atlas cowl with air-scoop plug test fit. And the arrival of the Pak/Madison at the museum. 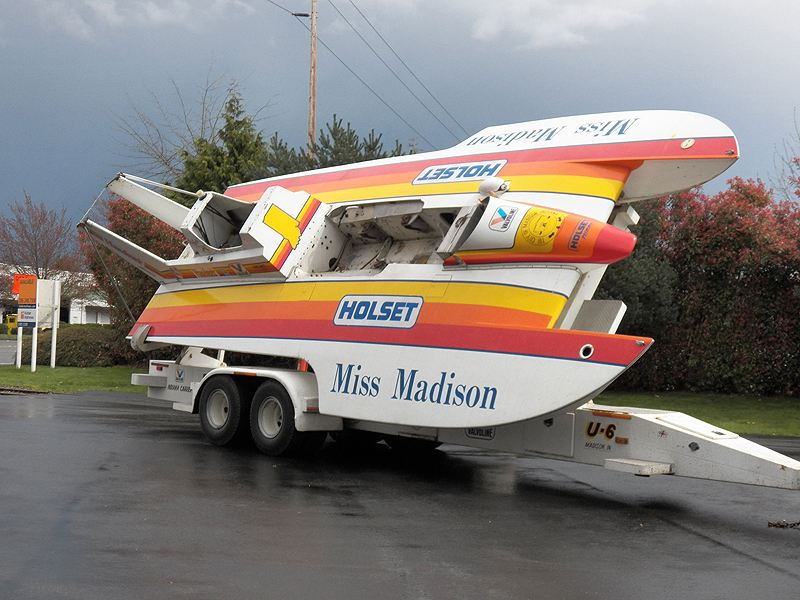 Can’t wait to see the new cowling. I will be in Thursday AM, for sure.

Two great things showed up at the museum today. One, was our new rear cowl which was fabricated by Scott Raney and his U-11 crew. They did an incredible job including adding a core material to the fiberglass which add lots of strength and will help the cowl float if it ever ends up in the water. One of our first jobs with the cowl is to add the iconic air scoops that were on the sides from 1977-79.

The other great thing that showed up at the museum today was Phil Lampman. Phil’s been stuck in a care facility following his bout with the mrsa virus which landed him in the hospital for a week. He still has a few days left to serve at the facility but he snuck out today to come to the museum for an hour of so. Great to see him.

As far as progress goes on the Blaster, today we sprayed primer in the cockpit so it can get painted before the deck and cowl get added. We now have all the interior compartments painted and most of the systems and mounts finished off. Over the next few weeks we’ll begin making and hooking up the maze of hoses for the fuel, ADI and water systems. Then it will be time to start fitting the deck battens. Our wood angel Compton Lumber, delivered beautiful milled 1”x 1” and 1”x 3/4” 16ft spruce last week. Gail, our wood expert, is chomping at the bit to start laminating the battens into full length pieces.

If you haven’t visited the museum yet to see the Blue Blaster project and the other great things going on, come on down. In fact, if you come in the next day or so you will see an amazing sight..........the 1973 “Wing Wonder” Pay’n Pak is returning to Seattle tonight and will be at the museum for few days. The boat was purchased by Ken Muscatel from Dave Bartush and will be restored back to it’s famous white and orange Pak colors. The boat will be parked right in front of the Blaster which will mark the first time these two legendary hydroplanes have been together in over 30 years.

Bill Muncey purchased the Pak team in 1976 which included the “Wing Wonder” and the new Jim Lucero cabover hull just being completed. When Muncey made the decision to make the Blaster his primary race boat in 1977, he sold the “Wing Wonder” to the Miss Madison team. The boat had a long career in the 1980’s as the U-6. Ironically, the Miss Madison, with Milner Irvin driving, was involved in the accident in Mexico in 1981. Muncey was killed after the Atlas blew over while leading the final heat.

Photos taken today (4-11-12) by Gail Richardson of the Atlas with is new rear cowl. Phil Lampman with uncle Bob Burd and Randy Meuller. 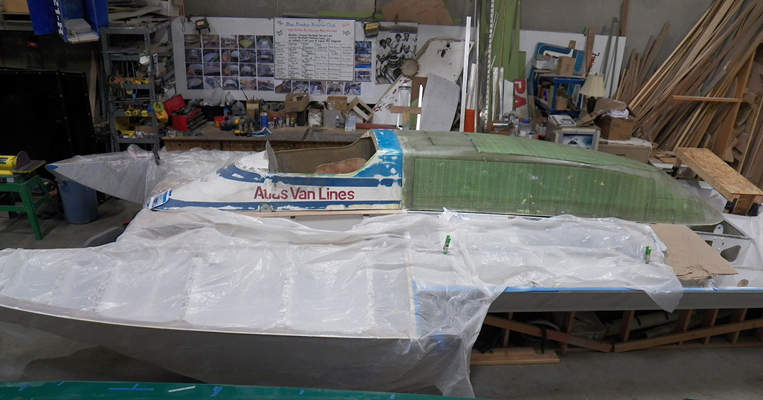 Excellent video as usual. Looking forward to getting back to the project at hand. See you next Wednesday.      Gail

Here’s the third progress video about the Atlas restoration. It was produced for the museum’s recent auction event and shown on a screen near the boat in the shop during the cocktail hour. It documents the entire 18 month project so far. One of the goals of this year's event was to raise much-needed funds to complete the Blaster. Many of the attendees saw the boat and video including some of the principals involved with Muncey and Atlas when it raced. These included Jim Lucero, Dixon Smith and John Walters. It was great talking with John, who knows as much or more about the Blaster than anyone. He is also the only person to drive the boat several times including at an exhibition on Whidbey Island. We hope to get John more involved as we progress.

With the sponsons now nearly finished, we have set the end of September as our goal to finish sanding, detailing and shooting primer on the entire bottom of the boat so it can be turned right-side-up.

Over the past several months the Blue Blaster restoration team has been busy building the sponson surfaces. Over the original sponson frames, we’ve added all new chines, sheers and internal battens. Then we added 1/4” plywood and fiberglass over everything creating the sponson sides and sub-floors. The past several weeks we’ve been focusing on the primary and secondary riding and recovery surfaces which are built on top of the sub-floor using additional ash battens, which the final aluminum sheeting is all screwed into. This has been the most serious aspect of the Atlas project. We’re determined to get the shapes and angles exactly right.......not only for esthetic reasons but for safety sake too.

We’re very thankful for all the advice and words of wisdom from some of the top hydroplane people on the planet. These include some of the Atlas’s godfathers such as Jim Lucero, Jim Harvey, Dixon Smith and Norm Berg. Also, Ron Jones and Ed Karelsen have been a huge help.

One of my goals for the Blaster is to set the boat up for safe exhibition speeds..........but still look cool too. I’ve drilled everyone I could about how to set-up our museum boats to run nice and level with big roostertails at 130mph, not original race speeds of 180+. And for the Blaster, a boat powered by a Merlin, a set-up that gets the boat on plane easily and is gentle on the engine. I’m happy to say that some of the experts I mentioned are now thinking that way too and have offered lots of great ideas. These include making small tweaks to strut and primary angles of attack, props and overall boat balance.

Below are some photos from the past month taken by Phil Lampman and Gail Richardson. By the end of the summer, we should have all the aluminum on the sponsons and the bottom of the boat sanded and ready for primer. And soon after that it will be time to flip the boat back over to add the systems, deck, cowl and wings.

We have a wonderful and talented group of guys on the Atlas team. Come on down to the museum this summer and hang out with us. Heck, just having some coffee and hearing Phil’s jokes and Gail’s police stories are worth the trip. 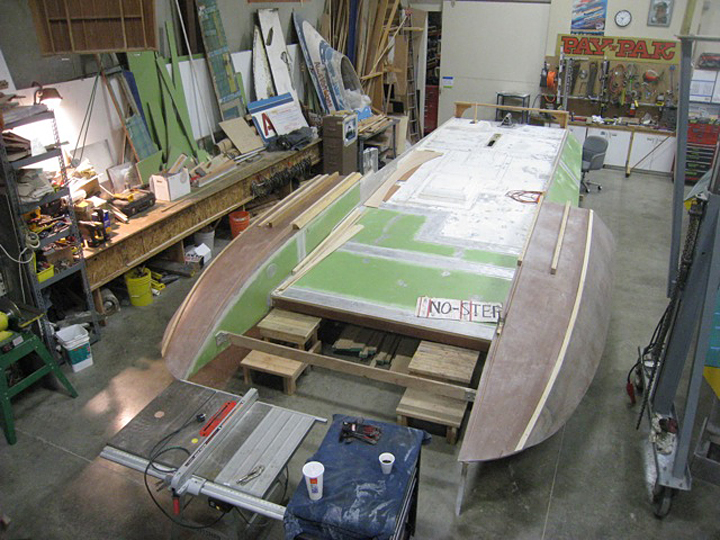 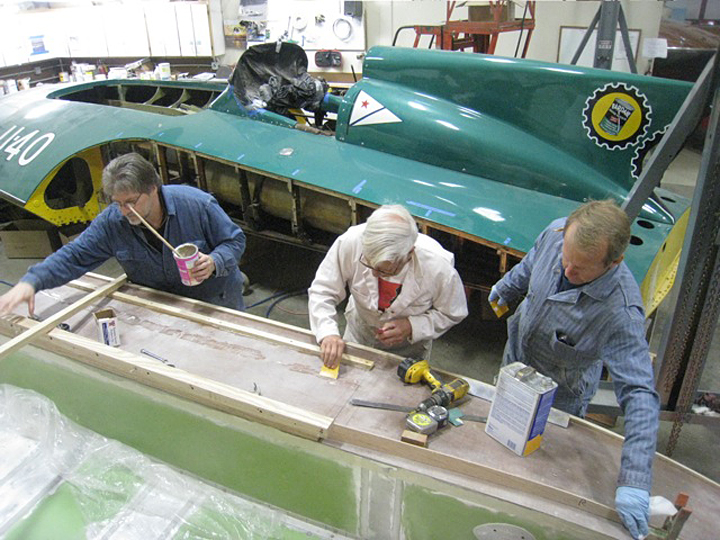 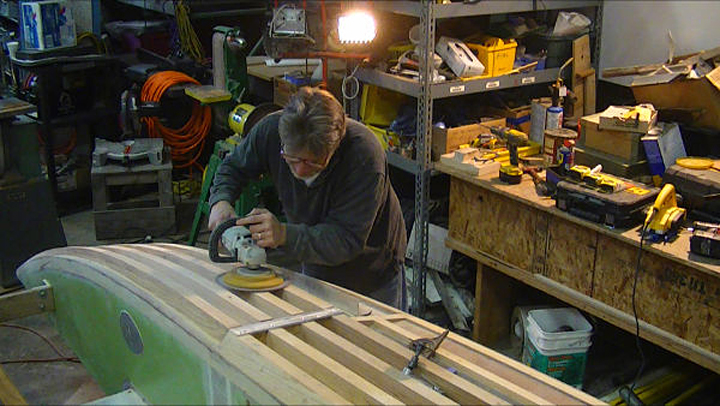 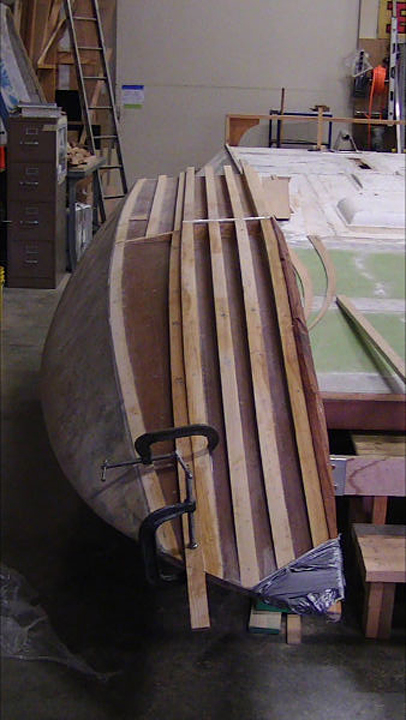