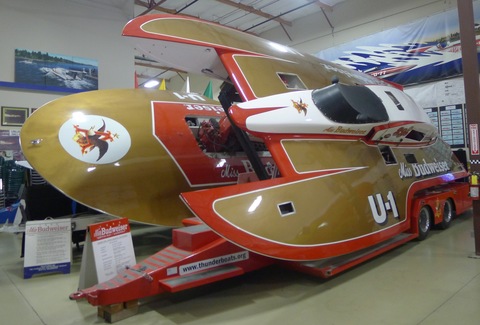 For generations of us Northwesterners who grew up in the 1950s, 60s or 70s, unlimited hydroplane racing was the sporting event of the year. The Seafair races were broadcast wall-to-wall on all three network TV affiliates and several radio stations.

I found veteran hydro owner and driver, Bill Wurster, where you can often find him—at the Hydroplane and Raceboat Museum in Kent.

“They didn’t have a ball team that was doing anything; they didn’t have a baseball team or a football team, or a hockey team. And so we were the primary sport of the year and we drew a lot of people—some 400,000 down to the Lake Washington shores,” Wurster said.

“And when I got to the first race and took that boat out, I can tell you right now that my hands were sweating,” he said.

You can see many of the vintage watercraft at the Hydro Museum. With their piston-powered, World War II surplus fighter plane engines, the thunderboats could be heard almost anywhere along the shores of Lake Washington. Kids like me would build crude hydroplanes out of plywood and drag them behind our bicycles, making the best hydro sounds we could. Kind of like the kids in a youth group from Fife who got to sit in the museum’s boats and pretend they were screaming across the water at 160 miles an hour.

Today, these kids look up to sports stars like the Mariners’ “King Felix” or the Sounders’ Freddy Montero. For us, it was the late Bill Muncey, or 11-time Gold Cup Champion Chip Hanauer.

Hanauer recently came to the Hydro Museum to fire up the Atlas Van Lines for the first time in decades. He’ll be driving in an exhibition at the Seafair races this Sunday, and is a little nervous about damaging this rare and pristine piece of hydroplane history.

The Hydroplane Museum has 17 boats in its collection including storied names like the Miss Budweiser and Slo-Mo-Shun Three, but only room for nine or 10 to be displayed at one time. You’ll see hydroplane memorabilia, including the rusty rudder from Muncey’s Miss Thriftway, recovered from the bottom of Lake Washington more than 20 years after it smashed into a Coast Guard boat in 1958.

As for Wurster and Hanauer, you might see them on the Lake on Sunday.