The date was set for Tuesday, October 23 1979, on Lake Washington. Like Bill Muncey, who had been a lot less than enthusiastic back in 1960 when Miss Thriftway owner Willard Rhodes wanted a shot at the propeller-driven water speed record, Dean Chenoweth didn't really want to have a go. But, like Muncey, he was a pro who was prepared to do it for the sake of his boat owner, Bernie Little.

"I'm going along with it," he said with resignation, for he felt a debt. After all, it was Little's dramatic new Rolls-Royce Griffon-powered boat that had lured him out of five-year retirement in the first place, and that had put him back on top of the thunderboat world. Boat designer Ron Jones wasn't enthusiastic, either; "I'm not pumped up about straightaway records and never have been," he growled. But Dean would do it, for Bernie.

In the Unlimited ranks, a few were keen on the idea but most others shared Jones' singular lack of eagerness. Steve Reynolds, that year the driver of the cathedral-winged U-31 Circus Circus, said to wealthy Las Vegas casino owner William Bennett: "If you want to go for the mile record I'll give you a list of drivers - and my name won't be on it."

Prior to the accident Chenoweth had warmed up with speeds between 181 and 193 mph, but after that the wind blew up from the south around 1:35 pm so the team elected to stand down and wait. It began to look as if the attempt would have to be postponed to the following day, especially after Chip Hanauer in the Norm Berg-designed Squire Shop, sister to the Circus Circus, spun out on a test run. Certainly, Chenoweth was keen to wait until Wednesday, but then around 3 pm the wind dropped, and off he went.

There was a two to three inch chop running on the lake, and the wind was no more than three miles an hour. The late Gene Whipp, the only man in Unlimited racing history with a perfect 100% win record after triumphing in his one and only race in the category with Lincoln Thrift back in 1974, was in charge of the attempt for the APBA. "Conditions were perfect," he remembered.

Shortly before he ventured out, Chenoweth was asked by a reporter how it felt to prepare for an attempt. "You have to feel you're ready just like a high jumper, right?" the newsman enquired. "That's it," Dean replied, tight lipped.

Miss Budweiser had just gone through the traps at the beginning of the measured mile when the nose began to lift at a speed later estimated at 215 mph. Certainly, onlookers believed it to be considerably faster than it had been during his first runs. Later, Dean would tell Little that the speedometer had been `beyond the peg', which certainly meant close to or over 215.

"He was well over what he needed to go for the record," affirmed Whipp. 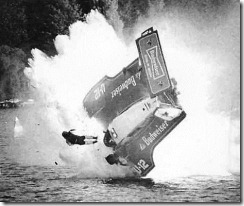 Seattle Post-Intelligencer photographer Cary Tolman was in the right place at the right time to capture the dramatic moment as the 30 foot boat flipped, and it was quite clear from his pictures that the propeller was missing. Maybe a weld had broken in the rudder, perhaps he had hit something in the water. Whatever it was that had upset the hydroplane's delicate equilibrium, the roostertail broke into a ragged pattern as Miss Budweiser cartwheeled across the surface, throwing Chenoweth out like a rag doll.

The Coast Guard was on the scene in seconds, and when Brad Van Patten found Chenoweth, he was, amazingly, conscious. He was reported alert, even cracking jokes as they eased him aboard. Within moments, despite injuries that included cardiac bruising, more broken ribs than you'd ever want and a pelvic fracture, he was sitting up as they carted him off to the Harborview Medical Center.

Chenoweth remembered much of the accident, and was soon poring over copies of Tolman's remarkable photographs, analyzing what had gone wrong. Shortly afterwards, he was asking Little to build a new boat. He attributed his remarkable survival to his level of physical fitness. "I don't smoke and I don't drink, and I run six miles a day," he said. He would attribute an equally remarkable recovery to the same things.

The other vital ingredient in his survival was the special flak vest that crew chief Dave Culley, his brother-in-law, had insisted that he wear for the attempt.

It was clear that Chenoweth planned to return to racing as soon as possible. Within 24 hours of the accident he was talking to Bernie Little about a new driving contract. But this time record breaking didn't figure in his plans. Later he would say, "The next time I see ole Roy Duby, I'm gonna tell him he can have that damned record!"

Before he thought about actually climbing aboard the replacement Miss Budweiser, however, he explained how he felt about the prospect. "It's a funny thing, but to be very, very honest - and maybe I'll feel different when I actually get into the boat - I feel as if the accident never happened. With Dave's lifejacket I had a crushed ribcage; without it, I wouldn't have had a ribcage.

"He first suggested it when I came back to racing at Madison, but I just didn't like it. In fact I wouldn't wear it until he got tough about the issue just before the record run in Seattle."

Doctors at the Harborview were amazed when his pelvic fracture stabilized itself overnight. In mere mortals that usually takes six months. Soon he would be back running, pushing himself up to his regular 10 miles a day. "I feel no animosity, no anxiety - at least at this point - about getting back into the boat," he said. "I feel great."

He was delighted during the recuperation period when in March 1980 he beat Florida State football coach George Henshaw over 10,000 meters. "The football players dread spring training because George beats them every time and doesn't let them forget," he laughed. "So I felt pretty good when I out-ran him. Then last month I ran competitively in a couple of distance races. One was 6.2 miles and I finished 128th out of 1013 people. Not bad for an old man. There were 57 runners in my age group and I finished seventh." He was 43...

He came back without any psychological baggage, and raced harder than ever. The Griffon-powered Bud was still the class of the Merlin and Allison-powered field, after Little had assiduously harvested the more potent engines, and more than good enough to bring him the National High Points Championship in 1980 to go with the titles he had won for Little in 1970 and '71. But fewer than 12 months after the record drama Chenoweth had that awful floating feeling all over again, when Miss Budweiser lost her rudder at 160 mph on Lake Washington in August. This time he was left nursing a broken shoulder blade, lung damage and three more rib fractures. It could have been a lot worse.

"I knew damn well that something was drowning me," he said, for this time he had not been thrown clear. "It was like something had a hold of my legs and was trying to pull me down." He was tangled in his emergency parachute lines. "Even X-rays showed water in my lungs," he joked.

He was taken to the same floor at Harborview, where he made time to expand on the latest spectacular incident in his career: "The boat had the same shudder as last time, exactly the same feeling. But this time we were going 50 mph slower. It was just like I had lost the steering, but for the first couple of seconds I thought the boat was gonna ride it out. But then it started going to the left and I said, `Oh, oh!'

"I stayed conscious throughout this one, all the way. I saw the boat come over me and go on. The last time I didn't really remember anything. Maybe if we were running up by Sand Point I'd feel differently. But I seem to have one kind of luck on Lake Washington - bad luck!"

In 1981 in a rebuilt boat he beat out the legendary Bill Muncey in the hitherto dominant Atlas Van Lines 'Blue Blaster', prior to the latter's death in the end of season World Championship race at Acapulco. The world title also went to Chenoweth, who now had thrust upon him the late Muncey's role as the series' yardstick.

Going into the final races of the 1982 campaign, he was challenging Muncey's heir, Chip Hanauer, for a fifth National High Points title. They rolled into Pasco, Washington, for the Columbia Cup Trophy, going head-to-head. On Saturday morning Chenoweth was the first to get on the water and had done a warm-up lap at 126 mph in readiness for a pukka qualifying attempt. But at 9:38, going down the Franklin side of the river, Miss Budweiser inexplicably barrel-rolled at a speed later estimated at 180 mph. For the second accident in succession Chenoweth stayed in the cockpit, even when the boat smashed back on to the Columbia River. But this time he did not survive. The only unlimited racer to have withstood an accident at more than 200 mph never regained consciousness.

Lieutenant Commander Dennis Godfrey, who was leading the Coast Guard, witnessed the accident from beginning to end. "The bow of the boat looked like it was coming up a little bit and then it went back down," he said. "But then the boat came up on its tail end and seemed for a few seconds just to be sitting on it. Then it just seemed to lean over and we knew it was bad."

Rescuers found Chenoweth floating face down in the water. Every rib was broken, after he had sustained massive chest injuries. Medical teams at Kennewick General Hospital fought valiantly for 30 minutes to save him with cardiopulmonary resuscitation, but it was to no avail. Dr. Robert Axford finally declared him dead at 10:25am.

"Dean was a carbon copy of Ron Musson in every respect," says hydro historian Bob Burd. "Only the years separated them. They were great guys, gentle, fun, honorable.

"I'll never figure how Bernie persuaded Dean back after he retired in '74. He should have quit after that accident in Seattle in '79, but he just couldn't keep away. When he was killed he went like Muncey did in Mexico. He was redlining it. The boat was set up for 180 and he was pushing for 190."

Chenoweth's wife was a quite remarkable woman, who belonged to that rare breed of human beings who could understand the primeval urges another can feel that make them want to prod the tiger time after time, that make them want to hang it out over the edge of what other, more rational people would consider the limit of risk. In an incredibly moving interview with reporters who demanded to know just how she felt about his decision to climb back up on to the tightrope after yet another brush with death, she had replied: "I'll be 100 per cent behind him. He's a pro and I respect his decision. It's up to him. Most men search their whole lives for something they're good at. Dean found it long ago."

When fate reached out for him, Chenoweth was the best they had.

On the night of the accident Little was moved by the number of people who called him urging the Miss Budweiser team to carry on. It did, but Chenoweth's lasting legacy to the sport that he loved was the enclosed cockpit, developed in his memory by Ron Jones and Little and born out of their resolute determination to stop the unlimited hydroplanes becoming widow makers.