The world of Unlimited hydroplane racing is extremely dangerous stuff under even the best circumstances. The drivers who race hydros make Sprint car jockeys and those souls who strap into Top Fuel projectiles look like geeks. The principle of these wildly overpowered racing boats is to balance them atop planes at full speed, limiting their contact with the water, as opposed to a normal vessel whose hull is deeply submerged. The hydro dances atop the chop while its engine thunders. Hopefully, the delicate equilibrium isn't upset, plunging its needle bow into the drink. When that happens, the driver gets pitched away at insane speed while the boat disintegrates.

Therefore, messing with provably reliable hull design can pose grave consequences. We were amazed to learn recently that a longtime aeronautical engineer, hydroplane designer and historian of the sport has written a book about promising race-boat designs that proved to be flops. The author is Doug Ford and his treatise on 27 troubled boats is entitled What Were They Thinking?

Doug's premise is that, unlike most forms of modern motorized sport, Unlimiteds have traditionally been governed by very thin rule books. Innovation, rather than "spec" platforms, are encouraged. He grew up in Seattle when hydroplane racing was its undisputed king of sport, and was a crew member for Slo-Mo-Shun IV, a famed Unlimited designed by Tudor Owen Jones, and today considered the first modern hydro to get "up on the prop" under full throttle, tottering on its three sponson planes, and which captured the 1950 Gold Cup in Detroit. It was part of an evolution that began when the great Gar Wood ran the first "step" hydro, with a single hull plane, in 1917. The three-point hydroplane, long the sport's standard, dated to 1936 when Adolph and Arno Abel built Miss Manteo II in Ventnor, New Jersey.

The book examines various efforts to improve on the three-point design, beginning after World War II when surplus Allison aircraft engines were widely adopted as power sources. Doug begins with the tale of Ernie Fetske, a naval architect who had helped create the amphibious DUKW for General Motors. Fetske had drawn a legendary three-pointer called Skip-A-Long, an all-aluminum craft that ultimately sank during a race on Lake Tahoe. 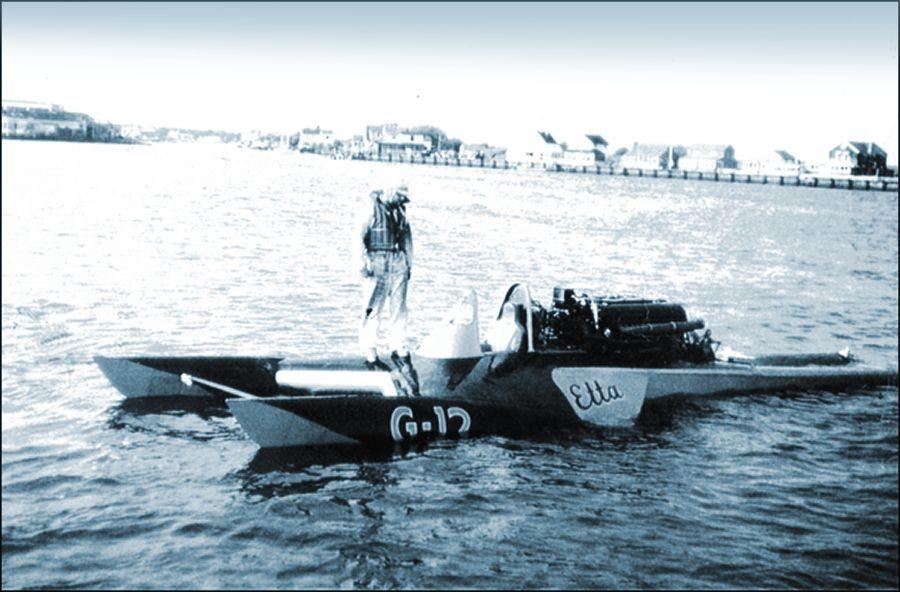 Later, a Cadillac and Oldsmobile dealer from Long Island named George Sarant commissioned Fetske to draft a replacement for his aging hydro, Etta. For inspiration, Fetske looked to the designs of the German aerodynamicist Alexander Lippisch. In Germany, Lippisch had created the tiny Me-163 rocket-powered fighter for Messerschmitt, and after the war, worked extensively on delta-wing aircraft designs. He also developed a semi-air cushion racing boat design with an aircraft pusher propeller. In designing Etta III shortly after 1950, Fetkse exhibited real daring. It was a reverse delta-wing design, with sponsons forward and on either side of the cockpit, which itself was radically positioned ahead of the Allison 1710 V-12. The 32-foot Unlimited was also among the first to be fully built of aluminum. It looked wild. The problems were that first, it wouldn't get up on its planes, probably because of nose-heaviness. Redesigned sponsons fixed that, but the Etta III simply wasn't fast enough. Sarant quit Unlimited racing, and his boat was ultimately scrapped. "It sat in a field for years, and the owner finally cut the sponsons off it to ensure that nobody would get hurt trying to run it," Doug said. Fetske, however, was vindicated, because after considerable refinement, his "pickle fork" hull layout and aircraft cockpit became standard in the sport.