Henry, a high school dropout who never went to college, never formally studied engineering or naval architecture, was a self-taught genius who read everything he could about boat design and construction and improved upon it. He started building boats in 1947 in Portsmouth, VA. Ironically enough, his first boats were sailboats, Hampton One Designs, which were considered hot boats in their day. Henry shortly switched to his first love, race boats. This partially restored 1950 Lauterbach hydroplane illustrates the conventional
design with the driver sitting in an open cockpit behind the engine.

The immediate post-World War II era was, in many ways, the golden age of powerboat racing. War surplus was a source for everything from aircraft engines to greatly improved materials, including glass-reinforced plastic (what we now call fiberglass), aluminum and marine plywood. The inline V-12 and V-16 fighter aircraft engines with names like Rolls Royce and Allison were quickly adapted for use in the rapidly-developing Unlimited hydroplanes. Speeds were steadily increasing, and new records were set and broken almost weekly. The sound of an unmuffled 1600-horsepower engine roaring by at maximum RPM gave rise to the popular name for the Unlimiteds: Thunder Boats.

Henry, and later his son Larry, were in the thick of this quest for speed. By the time Henry retired from active boat building he had built more than 200 hydroplanes, many of them champions. He was also a skilled driver, winning National High Point Champion in three hydroplane classes in the 1950s, and was inducted into the American Power Boat Association’s Hall of Fame in 1956. One of Henry’s most famous designs was the 1967 World Champion Unlimited Hydroplane Miss Chrysler Crew. She was the only boat powered by automotive engines (two 426-cubic-inch Chrysler Hemi V-8s) ever to win that title. Henry retired from boat building in 2001 and passed away in 2006, but not before instilling his love of speed and impeccable craftsmanship in his son Larry.

Larry does not describe boats as the family business, although it was his father’s. “My dad had four sons, and I’m the only one who was interested in building boats,” he explains. “From the age of twelve I was in the shop helping my dad, or underfoot, getting in the way. I loved boats and working on them and spent every moment I could with my dad. He was a great teacher.” Larry began his career as a driver in 1963. He recalls graduating from high school in 1965 on crutches, the result of a crash. “My dad encouraged me to drive. He said he’d stick to designing and building them, and I could drive them. That way we wouldn’t compete with one another. It just took off from there, and we worked together for 25 years.” 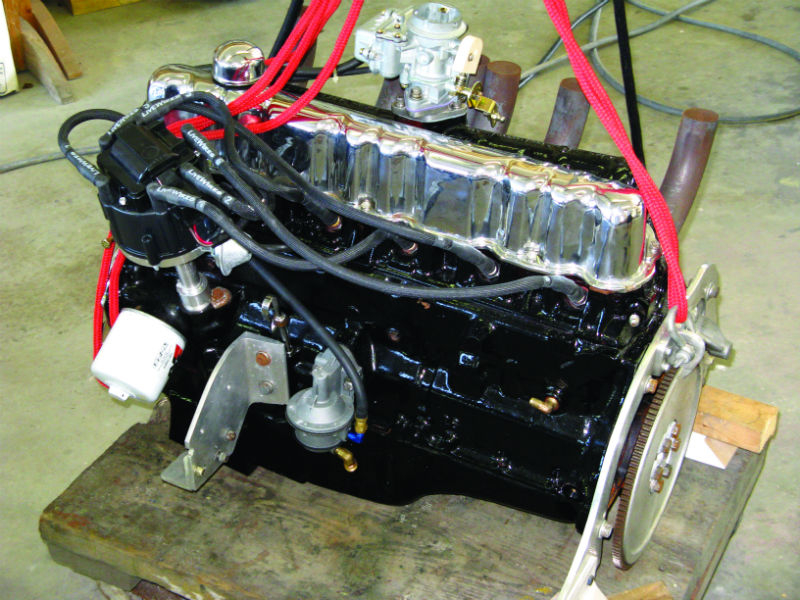 Larry Lauterbach in his shop with Murjr’s Lauterbach Special. A National Modified cabover Hydroplane built in 2001.
The boat has a carbon fiber hull and a birch plywood deck. Larry describes it as “the best thing I ever built.”

Larry was a very good driver indeed. His racing career spanned more than 40 years before he retired in 2005. He is ten-time APBA National Champion, Four-time National High Point Champion, three-time Hall of Champions Inductee, and has won more than 350 races. He is the all-time US Grand Prix winner and set five International Motorboating World Records. Although he’s driven more than 35 boats in competition, he is quoted as saying that his all-time favorite to drive is a National Modified class cabover, powered by a 305 cubic inch Gaerte Chevy V-8 rated at 650 horsepower, named Murjr’s Lauterbach Special. He built the boat for Bobby Murray in 2001. “… it’s the best thing I ever built.” High praise from a man many consider to be the builder of the finest and fastest hydroplanes in the world.

On a recent sultry summer morning I met Larry Lauterbach at his shop, tucked into a quiet marina on the banks of Little Creek in Chester on Maryland’s Eastern Shore. Larry talked about the changes he’s seen in hydroplane racing and his concern for the sport that he loves. I asked Larry how the boats differ now from the Unlimiteds I remember watching race for the President’s Cup off Haines Point on the Potomac in the 1950s.

“In those days they were all aircraft powered, V-12 Allisons and motors like that. They were all conventional like these boats here,” he says and indicates the two boats in his shop with the engines in front of the driver’s cockpit. “You sat outside in the open and you held on, and you died! If you were good, if you were one of the top dogs, you more’n likely were going to be killed before it was all over with. Then they started encapsulating the drivers and strapping them in. I didn’t like that at all; you weren’t strapping my butt into a boat!” He explains how he got used to enclosed cockpits and escape capsules eventually.

“Then they started using the rear engine (cabover) design, and they switched to gas turbine motors. That’s what I raced, I never raced a piston engine powered unlimited. At first we raced at about 160 miles an hour. Then the turbines would go over 200. Back when I was still racing in the late 80s we were going 220 miles an hour. It was too fast. Now they’ve put fuel restrictions on them and slowed ‘em down to about 190.” He explains that the boats are a lot safer than they used to be. 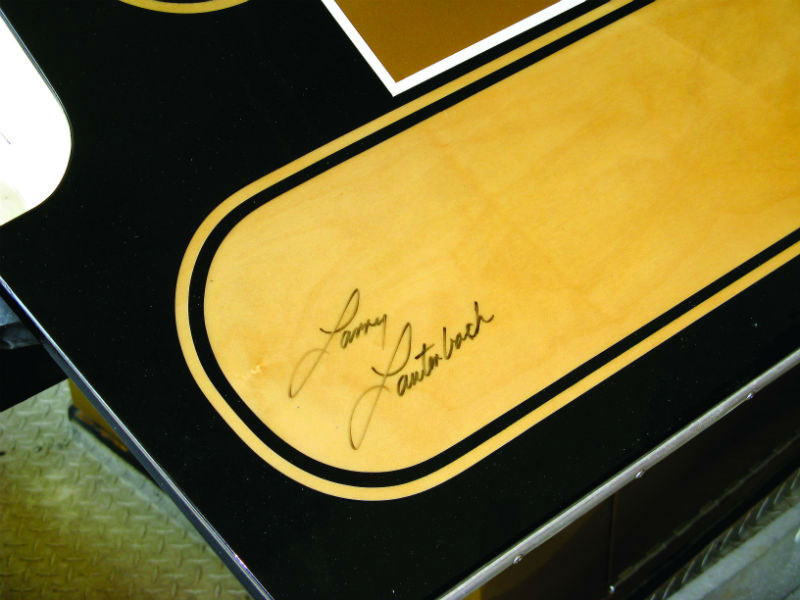 Like any artist, Larry signs his work. The starboard quarter of the Special.

“The association has made all kinds of safety devices mandatory, but they have not required a trap door on the bottom like that,” he indicates the escape hatch on the bottom of the boat on the trailer. “I wouldn’t put a driver in a boat without a trap door. What if you are upside down, especially in shallow water where you can’t get the canopy off? I always put a door on my boats and I was the first to put a window on the bottom as well. That gives you enough light to see what you are doing so you can get out if the boat is upside down. They have come a long way in safety, but when you incorporate all those safety features you also increase the cost of the boat. Now we don’t kill near the number of drivers we used to. In fact we expect to walk away from boat crashes now. Today I wouldn’t race a boat without a canopy.”

Although he applauds the steps taken to make powerboat racing safer, Larry is not optimistic about the future of the sport. “It’s a dying sport,” Larry laments. “The boats are more complicated and expensive, travel costs more, the economy is down, people aren’t interested in coming out, you name it. I hope I’m wrong, but I don’t think I am. There are too many classes, so you only have two or three boats in a race. We used to have 25 boats or more at a start and that put on a real show. Boat racing used to be booming, but it’s just about died off now. Nobody can afford it anymore.”
To further prove his point, Larry explained that when his dad was building boats they had a 12,000 square foot shop in Portsmouth. Later they moved to Suffolk, Virginia, to about 6500 square feet, and Larry moved to his current 2500 square foot shop in the late 1990s. However, there is a bright spot in Larry’s business. 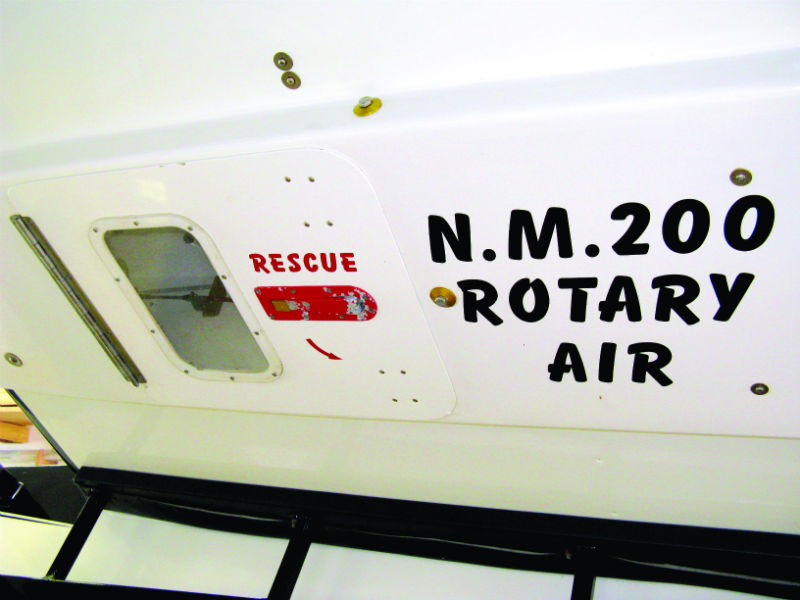 The escape hatch below the cockpit and between the sponsons on the Special. The number tells rescuers the identity of
the boat. “ROTARY” identifies the type of latch on the drivers harness and “AIR” tells them the driver has an air bottle
with approximately 30 minutes of air.

“Restoration has been the biggest part of my business for the last 10 or 12 years,” Larry comments. “Luckily a couple of friends of mine back in the early 90s decided that we needed to preserve these old raceboats, and they started a Vintage class. They take these old boats like these two here and they put on exhibitions with them. It’s become very popular. They’ll get 25 or 30 boats at a show and a big audience. These are boats that used to race. The people who are buying them usually never raced, but they saw ‘em race, and they couldn’t afford it at the time. Now they can afford to go buy one, and usually, they need work and they bring them to me.”

He feels fortunate that Lauterbach boats are so sought after. “It’s been great for me. Between me and my dad, we built more than 230 boats, and a lot of them are still out there. In the 60s and 70s if you didn’t have a Lauterbach boat, you didn’t win, especially in certain classes, and people remember those days. Our designs are always fast, and the quality and craftsmanship was always the best, so this is where the new owners bring them to have them restored.”

A very special boat that Larry is working on now is one of his dad’s earliest hydroplanes. Originally built in 1950, it is the oldest Lauterbach boat in existence. Although the boat still needs varnish and paint, one look at the loving care and meticulous workmanship of the restoration leaves no doubt that the craftsmanship that made Lauterbach boats legendary is alive and well in a small shop in Chester, MD.

there will never be two more better boat builders than the LAUTERBACHS!!!!! craftsmanship and speed nobody even comes close!!!