You heard the boats before you saw them. That was part of the excitement, and what made the race special.

The crashes and near-misses made it special, too. The outboards dodged logs, bridge pilings, overhanging trees and each other with varying degrees of success.

The race even came complete with its own smell - the aroma of the burned alcohol fuel from the motors of the fastest class, the F hydros.

It was known as the "Slough Race" and the name stuck even after the Sammamish Slough was dredged, widened and renamed the Sammamish River in the mid-1960s. 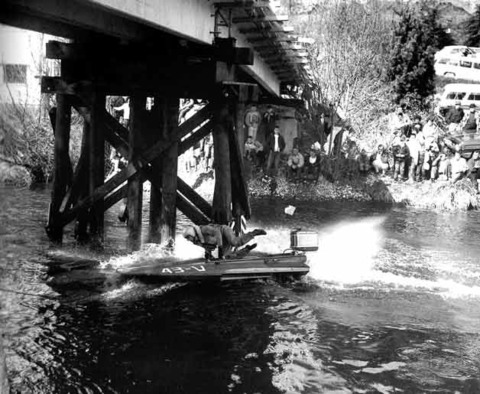 "I don't think there was a race like it in the nation, ever," said Howard Anderson, 64, who still races outboards and serves as national vice president of the American Power Boat Association.

The race, up and down the 13-mile link between Lake Washington and Lake Sammamish, was held this time of year 47 times, starting in 1928. It folded after the 1976 race, in which a spectator was hit by a boat. After that, organizers could not buy insurance.

In its heyday the race drew more than 100 entries, divided into various racing divisions, and the usually unreliable estimates of some 40,000-80,000 fans.

A different division would start every five minutes from Lake Washington and head upstream. Waiting with cameras poised at the most dangerous turns were newspaper photographers and cameramen from Movietone, who would film crashes that would be shown in the nation's theaters. "If a guy broke down, the spectators would help him get out of the water, lift the boat out and even help him work on the boat," said Anderson, a two-time winner. "But if the boat was wrecked, they'd just help him get the boat on the bank then invite the guy to drink beer with them."

Among defunct Northwest sporting events, the race is among the leaders in nostalgia.

Dick Rautenberg, 54, of Bothell, still competes in outboard races but said, "That was the most fun of any racing we've done."

`The Taming of the Slough'

The race lost some of its unpredictability when the U.S. Army Corps of Engineers dredged and widened the slough in a two-year, $3.8 million flood-control project from 1964-66. It was an undertaking which racers derisively called "The Taming of the Slough."

"Before, it was a lot narrower and there were logs in it and it was pretty messy," said ex-racer Bob Jacobsen, 65, who has retired to Palm Springs. 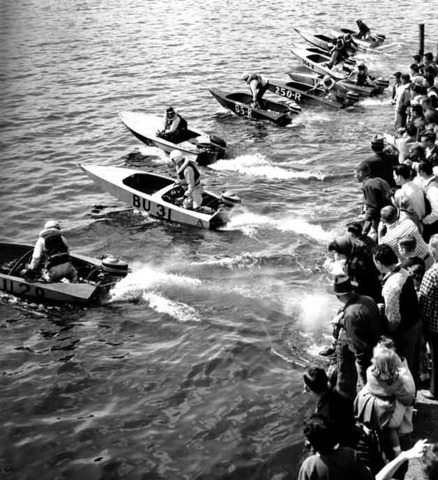 Harold Tolford, 70, recalled that the race would sometimes be held in flood conditions before the Corps of Engineers project.

"You couldn't tell where the channel was in the big straight stretches so you would just stay between the barbed wire fences on both sides of you," he said. "The fences were to keep cattle in so if you were in the middle you figured you must be in the channel."

Six-time winner Bob Waite, 69, said he was leading one year and within sight of the finish line when he ran into "an old rotten cedar log."

"The race was never a sure thing," he said. "There was a lot of luck involved."

As a result of the corps' project, the river entrance at Lake Sammamish was made unpassable for racers. A barrier designed to control the flow of water from Lake Sammamish made the river too shallow for racers. The finish line for the upstream leg was moved to Marymoor (at the end of the uphill leg, the boats would stop for refueling and repairs; the winner was later determined by total time on the two legs).

The course was full of twists and turns from Kenmore, the most-used starting point, until a point past Woodinville. Then came long, straight stretches and the F hydros would hit speeds of more than 80 mph.

"A lot of the fellows would run into the pilings," he said.

Another sure spot for accidents: a logboom in Woodinville in the years when a sawmill was operating.

Rautenberg was the spokesman in 1977 when the Seattle Outboard Association canceled the race.

In 1976, spectator Ron Clausen, a University of Washington pole vaulter, suffered a broken leg when he was struck by a boat that lost control near Wayne Golf Course. The accident was filmed by a fan with an 8-mm camera.

Rautenberg said the American Power Boat Association, through which the race had been insured, became "leery of the race" after Clausen was injured.

"What they told us was they didn't know what the Slough Race was until the UW pole vaulter got hurt," Rautenberg said.

At the same time, the governments along the course, particularly the City of Redmond, demanded that they be insured against any liability.

"We were getting it from both ends," Rautenberg said.

Clausen, 39, is a Boeing quality assurance supervisor who lives in Kirkland. He said last week his vaulting was "never the same" after the accident and he never competed again. The former two-time state prep champion from Shorecrest lost his Husky scholarship and said he had to drop out of school. He declined to say how much he received in the settlement but said the sum basically covered his medical expenses.

Clausen said he had regularly attended the race and always had enjoyed it until the accident.

"It wasn't my intent to shut the race off," he said. "But I had to get the bills paid and it did kind of ruin my pole-vaulting career."

Anderson said there is no chance that the race will be revived.

"Today, the crowd would have to be fenced 100 yards back," he said. "Back in the old days, people didn't get too nervous about things like that. Also, now there are homes, condos and apartments along the course. You could never do it."

Comment by Walt Arnsdorff on May 21, 2015 at 12:40pm
In the 50s and 60s in Savannah, Ga. an annual "Around the Island Race" was held on Wimington island, a local Barrier island on the Atlantic Ocean (the right coast). The course encompassed the island including part of the course running through Wassaw sound and being subject to ocean type swells, waves, etc. Most participants ran pleasure boats, fishing boats, whatever they took the family out on weekends for fun as the race was strictly a local fund raiser for the Marine Rescue Squadron if my memory serves correctly as I was about 6 at the time. My Old Man though raced D hydro's and was determined to win the thing if it killed him and it tried unsuccessfully several times. I don't remember him ever finishing much less winning. The Slough race sounds as if it would be a great format for today. Like a Formulae 1 race for Tunnel boats. My best memory of the Wilmington R.T.I. was the year the flare that was fired to start the race floated back earthward landing on Alley's Warf and nearly burning it down. Only old Savannah River Rats would remember this as locally we're too busy selling water to brilliant Yankee tourists for events like the race to ever occur again. The Sammamish Slough must have been a great Community event. As they say "First we kill the Lawyers "!
Great article,
Zapp

The Return of the Sammamish Slough Race

Lived in Seattle,65yrs., always heard of it, always wanted to attend, thought it would last forever, very sorry I mist my chance. One of the greatest events in Washington's histories.