Yep...that seems to be the universal reaction when I tell people that in just over a week from today I will be going to Doha with the U-17 crew to compete in the Oryx Cup. The first response is "will you be safe there?" (am I safe ANYWHERE???), followed by "where is that place?" (turn left at the opening of the Persian Gulf) and then always the big one, "Who's paying for it?" (a very rich Sheik who really, really, really likes boat racing!).

Thanks to the HARM's terrific new web…

The first major race to be run on the Detroit River was the 1916 APBA Gold Cup. This was by virtue of the community-owned Miss Detroit winning the Cup in 1915 on Manhasset Bay in Upstate New York and earning the right to defend it on home waters.

Miss Detroit was a single-step hydroplane, equipped with a 250-horsepower Sterling engine. The designer was the distinguished Christopher Columbus Smith of Chriscraft fame. As things developed,…

The Hydroplane and Raceboat Museum was once again a "Top 5" in the Museum category of King 5 tv's "Best of " poll.

In the seven years since he stole a Czechoslovak airliner loaded with furiously reluctant passengers and treetopped his way to freedom, 30-year-old Miroslav Slovak has pursued such a variety of careers and diversions that he has sometimes seemed headed several ways at once. This week…

Another big week coming up. Tomorrow we have lots of inserts to glue into the left airtrap. We need to lay the sponson frames on top in the morning to drill and mark all the holes. We have all the replacement frames made and they can be ground and have their extrusions attached. Today, Gail started routing out the top of the right airtrap so we might also be able to glue the wood into the top tomorrow or at least Thursday. Then we can mount the… 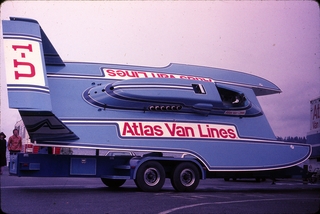